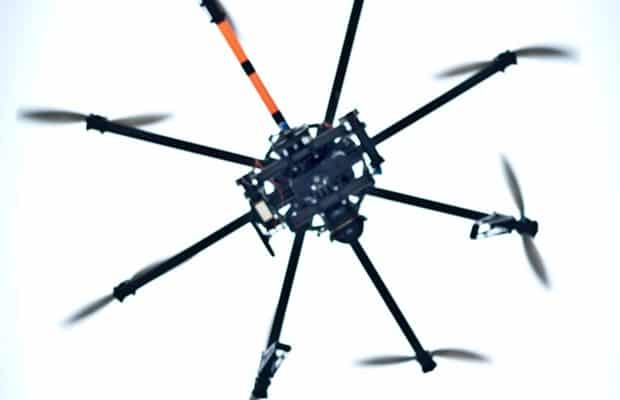 In the past few months we have seen some amazing developments in the flying drone industry. Amazon has announced a service, which will deliver your orders right to your door, and 3D Robotics, a commercial drone maker, has received $36 million in funding. The future of drones flying around everywhere is coming closer and closer to us.

Drones have already been used in various industries for years. So, let’s look at some cool things drones can already do and what amazing things they could bring us in the future!

Amazon has recently announced a service called Amazon Prime Air, a service which will deliver smaller Amazon orders right to your door the same day you make the purchase. And all of this will be made possible with flying drones.

As TechCrunch already pointed out, Amazon hasn’t started the drone-delivery game, but is rather joining it. Many companies have already entered the space before Amazon did, which brings us to the next part.

Drones can not only deliver books and other small online purchases you made, but also fly your lunch right to you.

A small German startup called DönerCopter brings your Kebab right to you as fast as possible. According to the website, their “Kebab Drones” can fly with speeds up to 65 mph (110 km/h).

Also, Dominos Pizza has recently tested delivering your favourite pizza via a remote-controlled drone, which can carry two large pizzas and deliver them in 10 minutes within a 4 mile radius. Pretty impressive.

In case you have ordered 20 large pizzas, you would need at least 10 drones to deliver them to you. Luckily enough, Ars Electronica Futurelab has created a technology, which allows drones to fly together in different three-dimensional formations. They have recently tried it with 49 drones flying outdoors, which means that you would be able to order up to 98 large pizzas and let them fly straight to your door 😉

By far the most popular use case for drones, until now, is filming. A lot of production companies use cameras attached to drones to film incredible aerial shots. To film a more professional scene with a flying drone it requires at least two people: one pilot and one camera operator. The pilot is simply flying the drone in a certain direction, while the operator is responsible for the framing of the shot, having full control over the camera. Check out this amazing video which will explain everything in detail:

The German company e-volo has developed a technology that will allow people to be transported from one point to another in a drone. At the moment, the 16-propeller Volocopter can fly for up to 20 minutes, but with future developments in battery technology, the Volocopter could fly for up to one hour or even more.

One of the most recent tragic events was Typhoon Haiyan, which has devastated parts of the Philippines, killing more than 5,000 people. Relief teams have been sent to the damaged areas to rescue people from under the debris. Drones, equipped with small cameras, helped the rescue teams to assess the situation in the target area, saving them much needed time.

In case you ever wanted to see stuffed animals fly, this is for you. Two Dutchmen, Bart Jansen and Arjen Beltman, have developed the OstrichCopter, which is half ostrich and half helicopter. Their “invention” has first been seen during the Zwarte Cross Festival in the Netherlands, where the stuffed flying ostrich has lifted-off for the first time.

The same guys have also let a stuffed cat fly. Take a look yourself:

A little while ago, a story has been spread about drones helping the Canadian police in the future by flying around 24/7, looking for criminals. The drones would be equipped with small cameras, which would stream the video feed straight to the police computers, which will run the video through a facial-recognition software. Creepy? Yes. Will it make the streets safer? Maybe. Fortunately for local privacy-concerned citizen, the story turned out to be a hoax. But who knows, maybe we will see drones flying around looking for bad guys in a couple of years.

As the saying goes, the devil finds work for idle hands. Creative inmates at the Calhoun state prison in Georgia have tried to smuggle tobacco and mobile phones into the prison using a drone, but have failed after a guard saw the drone hovering over prison territory. A similar story has also been reported in Canada.

Drones can also be used in agriculture in order to identify plant damage, checking inventory and helping with other types of crop diagnostics.

In an interview with Fox News, Jeff Lorton, Yamhill County economic development manager, says that drones are “a big game changer in agriculture” and “the Holy Grail of crop diagnostics”.

Brandon Basso, founder of 3D Robotics, suggests that farmers will also be able to decide whether to spray pesticides on certain areas or not, based on aerial survey of their crop, saving them both time and money, while maintaining the quality of the crop. Drones equipped with infrared cameras can also identify healthy and sick plants.

In the past few years, flying drones have become more popular and way more affordable. This led to a lot of new ways people use drones in both their personal lives as a hobby or even for business. In case you are thinking of buying a drone, go ahead and check them out on Amazon, where you can find some for as low as $37.62.

I am sure that drones will become even more popular, and soon they will be part of our daily lives.

What interesting uses can you think of? Please share them with us in the comments!

How To Root Any Google Nexus Device