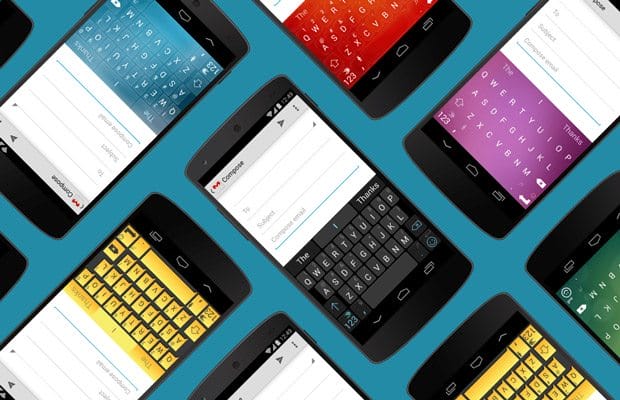 The shocking proliferation of autocorrect failure features populating Facebook these days, not to mention my own treacherous experiences with the smartphone keyboard led me to praise the makers when iOS 8 was released and the first crop of alternate keyboards were made available for the iPhone. Of course, Android users have long been privy to some spectacular third-party keyboards offering an enhanced feature set depending on your goals, gifts and even, occasionally, your sense of humor.

In a recent lifehacker poll, SwiftKey (available now for Android and iOS) raked in a shocking 53% of the votes for best alternate keyboard on the market today, leaving the number two keyboard (Swype) in the dust with only 13% of the vote. SwiftKey’s not-quite-patented advanced text-prediction capabilities adapt to your specific word choice and usage, learning not only from your short bursts of smartphone productivity, but also from your Facebook, Twitter and Gmail customs to offer you options that the traditional autocorrect function could simply never come up with. Type it out the traditional way, or simply swipe across the keyboard to get your message out there faster than ever and with fewer errors.

As the alleged innovator of the swipe to type technology that allows you to simply drag your finger across the keyboard rather than setting those digits in motion plucking out each individual letter, Swype (available for iOS and Android) is possibly the simplest and arguably the most efficient alternate keyboard on the market today. Like SwiftKey, Swype also provides predictive autocorrect options based on your usage and even allows you to assign specific gestures to frequently used phrases—so take that, QWERTY.

Fleksy (available for Android and iOS) might be the dark horse among this pack of excellent alternate keyboards, but given that this somewhat unintuitive option has just been used to break the world record for text messaging, it certainly seems to have earned a place on this list. With Fleksy, the focus is on speed and accuracy, achieved through an unusual design that shifts the layout of the keyboard as you type to ensure that the keys you need are always at your fingertips. And, although the Fleksy design can take some getting used to, the advanced autocorrect capabilities will often guess exactly what you meant, even if you mistype every single letter in a given word.

Minuum (available for Android and iOS), as the name suggests, is a design-lover’s dream with a simple, minimal interface that can function at the normal size or shrink the keyboard down so that more of the screen can be seen. Although the tiny keyboard can seem daunting at first, the text prediction capabilities of Minuum render this alternate keyboard perfect for thumb typers who prefer to focus on the message and not the medium for getting it out there.

The recent release of MyScript’s Stack keyboard alternative exclusively for iOS offers handwriting recognition rather than a traditional keyboard. Although the idea of drawing out each letter on a small smartphone screen may not sound appealing, for character-based languages or the calligraphically inclined, Stack’s intuitive handwriting recognition and support of more than 58 different dialects makes it a real game changer in the alternative keyboard marketplace.

If you’re of the opinion that a picture really is worth a thousand words, ScribbleKey might just be the deal of a lifetime. Another alternate keyboard available exclusively for iOS, ScribbleKey allows users to switch back and forth between a pixel-painting interface perfect for the drawing of tiny image-based messages and a traditional keyboard that will allow you to explain exactly what you just said. For sweet, intimate messaging that says more than mere text would allow, ScribbleKey is the real deal.

While the range of alternate keyboards offering predictive text capabilities and advanced autocorrect functionality has grown to include, well, nearly all of them, Keymoji (available for iOS) is one of the first keyboards to actually suggest unique emoji combinations that may just best express what you mean. Those racy little characters will appear and autocorrect so fast you may wonder if you’ve  gone entirely insane; but, then, the look of love (or genuine concern) on the face of the recipient of your message should be enough to make it all worthwhile.

Among keyboards like Keymoji that are swiftly changing our entire relationship with the very concept of a keyboard, PopKey may just take the cake because with PopKey you don’t just say it with words or with pictures, you say it with gifs, yes—gifs. Using the PopKey keyboard (iOS) you can enhance your message with one of the many animated expressions of love, hate, disgust or simply consternation, and let me tell you with PopKey that last one comes in handy quite a bit.

So, even if you’ve found yourself actually enjoying the new iOS stock keyboard, take a leaf out of the Android user’s playbook and don’t limit yourself to just one. Whether you need a professional alternative that will allow you to send quick, accurate messages or you’re just trying to be a little more playful, there’s an alternate keyboard out there to meet your needs.

Hannah Nelson-Teutsch is an a artist, writer and technology enthusiast, who negotiates the ever-illusive boundary between the now and the new with the grace of a gazelle and the retention of a google street view car. In her free time she can be found wandering the streets of Berlin with pencil, paper and iPhone in hand.