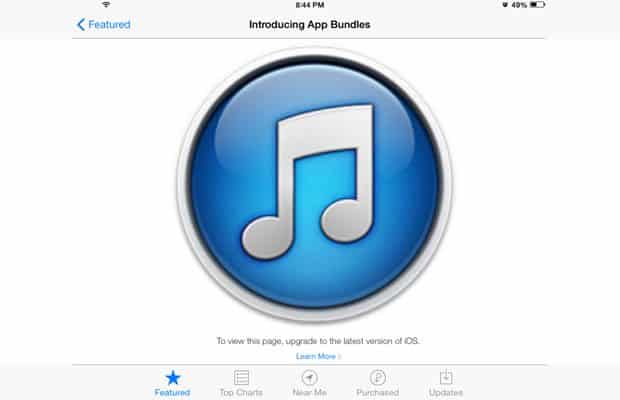 How to buy AppStore bundles without updating to iOS 8

iOS 8 adoption rates are on a record low, probably because most of the changes are directed towards developers and little has changed as far as looks are concerned. Also many jailbreakers would rather wait for iOS 8 hackers to find some exploits than hurry into the update. Though most people can do without other iOS 8 features, AppStore Bundles are something you’ll surely miss.

With App Bundles, not only do you get many apps at a discounted price, but if you’ve purchased an app in the bundle before, you can get the rest of it for less. For instance, I got the Modern Combat pack for free! For many, the complaint is that the App Bundles are just not showing up on AppStore app. Apple won’t allow you to view App Bundles on iOS 7 (or older) and since you’re here, it is likely that you’ve seen the above image before.

But the important point to note is that once you buy a bundle somehow, it will start showing in your purchases, even on iOS 7 devices linked to that account. Don’t worry if it sounds a bit confusing, just follow the steps below. The solution here is really simple. We’re going to use a Mac or a PC to purchase the app via iTunes and then, download it on your iPhone, iPad or iPod Touch, running iOS 7. 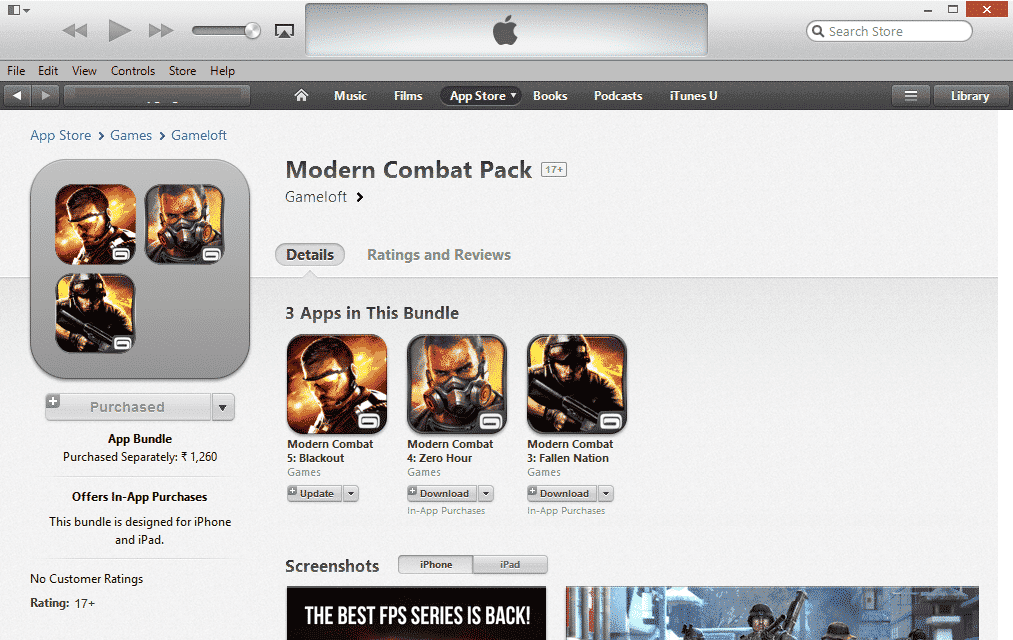 Open iTunes on your Mac or PC. If you don’t have one, just use borrow someone else’s computer; that doesn’t matter.

Click on iTunes Store > Choose App Store from the top bar. You’ll see an Introducing Bundles banner, click on it. Browse through the catalogue and purchase the bundle you like. You’ll be asked to confirm your Apple ID and Password. Once done, the app or game will start downloading on the computer.

Cancel it, if you’re on someone else’s computer.

Step 2- Downloading the Bundled Apps to your iOS 7 device

If you have downloaded the game on your computer, you can just Sync as usual to get it into your iPhone or iPad. Else, it will be available for download at the Purchased history on your device. If you don’t know where that is, just follow as below.

Open the AppStore app on your iOS 7 device. Goto Purchases (from the bottom bar) on iPad or the Updates tab (one on the far right) if you’re on an iPhone. You’ll find that the purchased apps are now showing up here.

Above, you can see the Modern Combat Bundled games as seen on my iPad Mini running iOS 7.0.4. Just click on the Cloud button besides it and the app will be downloaded. So this is how you can purchase and download iOS 8 App Bundles, if you’re on iOS 7 without updating.

However, this is not the only method you can use. If you have one device running iOS 8, you can purchase on that and download on others. Else you can find any of your friends whoíve updated to iOS 8 and purchase from their device. But, I believe that this method is most universally available.

Do you guys know any other work arounds? Do let us know in the comments section below.

What is Ello and how might it change social media?