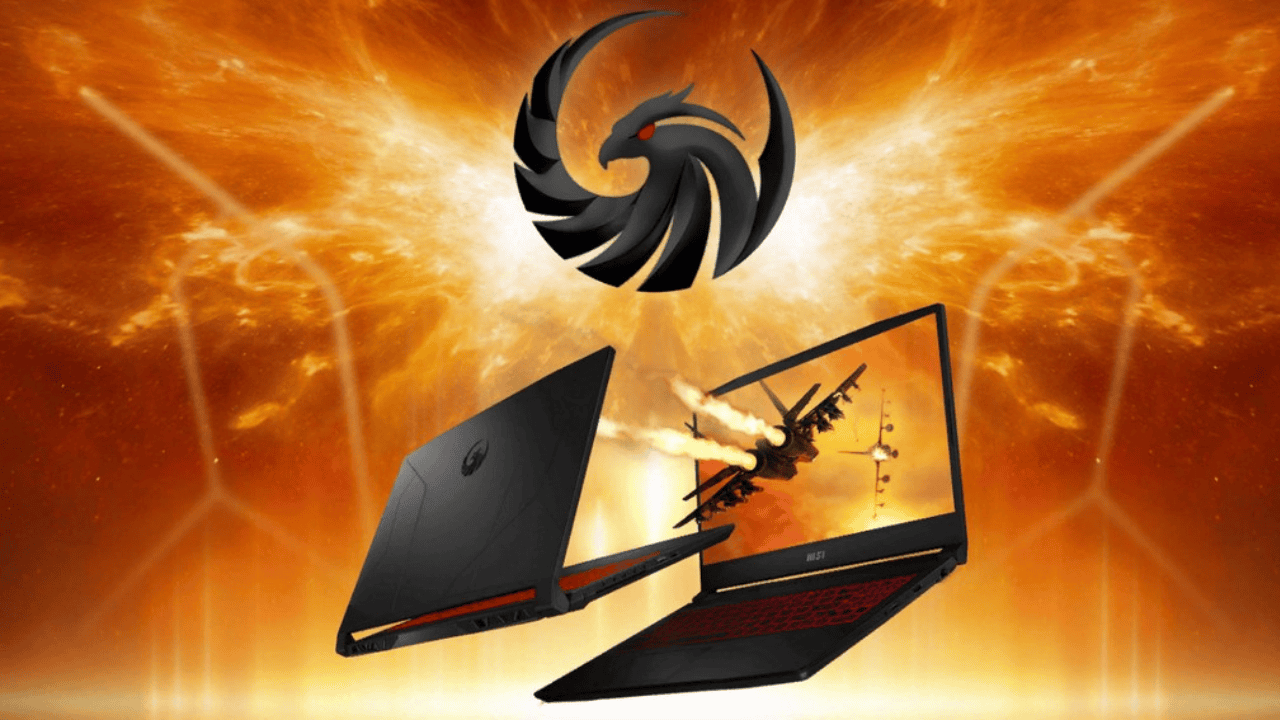 Can msi bravo 15 run games, I was pleasantly surprised to find that I like using the MSI Bravo 15 above my initial expectations after using it for a week. While it can handle 1080p resolution and 30 frames per second (fps) at maximum settings, it is not a particularly powerful gaming laptop. However, unlike some similar products that might cost $2,500 or more, this one retails for less than $1,000. The Bravo 15 surprised me with its excellent keyboard, abundance of ports, and respectable performance in both work and play. Okay, so the display may use some work and it wasn’t always easy to get games going. However, as a middle-of-the-road gaming laptop, the Bravo 15 accomplishes its goals. The Bravo 15 is a solid option for portable gamers on a tighter budget. In any other case, you’ll have to go for a more robust equipment, which will likely be more costly. In this article, we will provide you with a comprehensive review of the MSI Bravo 15. 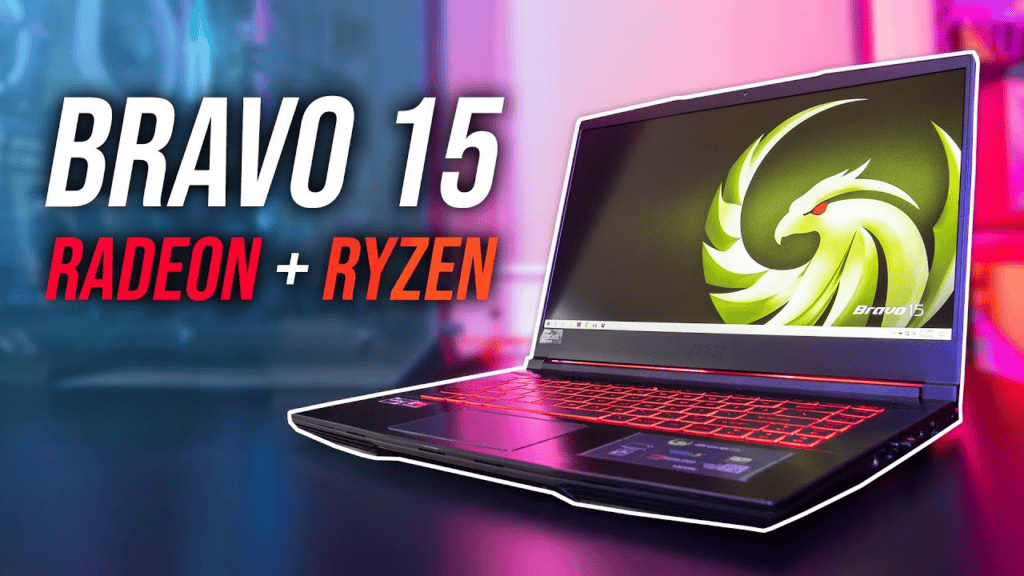 The MSI Bravo 15’s gaming prowess can be analysed in two ways. The first is as a $900 machine, which it handles admirably. The other is against more expensive gaming computers, where it fares less well. Here are the results of some 1080p gaming benchmarks that were run on the device:

If you’re wondering if the Bravo 15 can compete with a high-end gaming laptop, the answer is no. Spending an additional $1,000 (or more) on a high-end laptop like the Razer Blade 15 will yield significantly greater performance.

But the Bravo 15 competes well with other products in its price bracket, including the somewhat more expensive ROG Flow X13. It never dropped below 30 frames per second in any of our tests, so you should expect performance on par with a PlayStation 4 or Xbox One, albeit possibly with improved texturing and lighting. It’s also important to note that the Bravo 15 may be made to provide far greater frame rates without sacrificing image quality. I was able to get 75 fps in Age of Empires IV, 70 fps in Doom Eternal, 140 fps in Dragon’s Dogma: Dark Arisen, and 140 fps in Final Fantasy XIV when I used medium or high graphics instead of ultra. When played for extended periods of time, none of the games experienced any hiccups in their operation. Although the games were all running off an SSD, I found that their respective boot times were unusually long.

In terms of efficiency, the Bravo 15 is a mixed bag. Here’s how it fared in a synthetic benchmark called Geekbench 5.4, which evaluates total system power by running tests like file transfer and video encoding:

While I was pleasantly surprised by the Bravo 15’s video encoding speed, I found that it was not very quick or powerful for productivity work in other areas. However, if you’re looking for a gaming laptop, the Bravo 15 offers more than enough processing power to smoothly run all of your necessary productivity software. In the process of writing this review, I have 10 resource-intensive tabs open in Google Chrome, Microsoft Word, Spotify, Notepad, Slack, and the system itself, yet I’m still only consuming roughly 8 GB of the system’s 16 GB of RAM. However, programme launches can occasionally linger and 512 GB of storage will be exhausted much more quickly than anticipated.

The preinstalled software is my primary gripe regarding the Bravo 15’s performance. To put it mildly, AMD Radeon’s software is a hot mess. There is a faulty software version preinstalled on the Bravo 15. (this is something of a theme with MSI machines). I upgraded it, but it still wasn’t very good at optimising games, measuring frame rates, or even assigning the right GPU to demanding apps. (At first, I was unable to play Doom Eternal since the Radeon programme maintained that the Bravo 15 could only do it with its integrated graphics.) You’ll need some DIY tech support knowledge to run games on the Bravo 15. 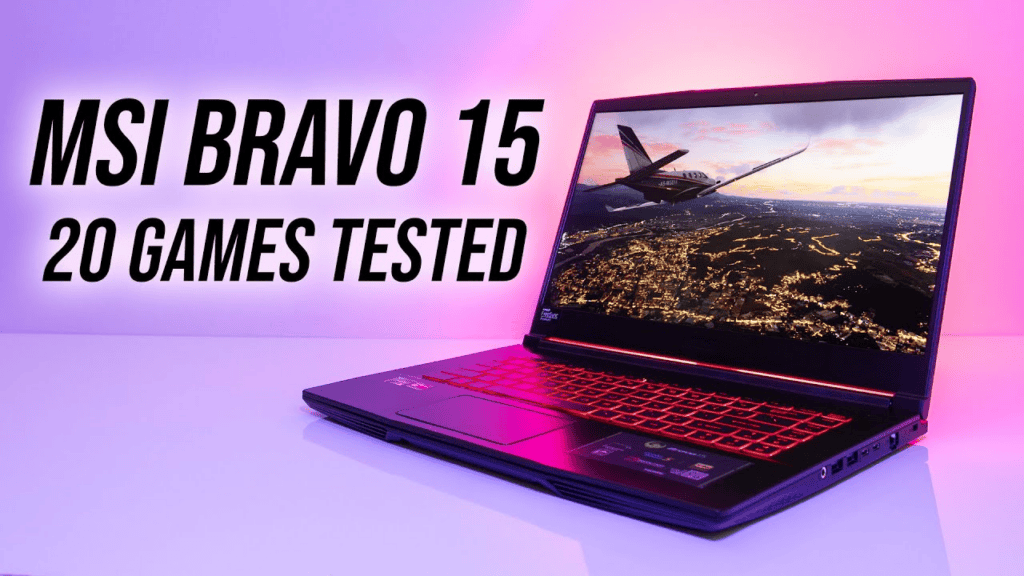 The MSI Bravo 15 has a good battery life for working, but a terrible one for playing games. And whether or not you’re using it for gaming, it’ll become rather warm. Both of these features are standard fare for portable gaming rigs:

Even while the Bravo 15’s battery life isn’t the best in its class, it should be sufficient for a lengthy journey during which work can be done.

Its temperature of 94 degrees isn’t ideal for keeping on your lap for extended amounts of time, but it’s also not as bad as the ROG Flow X13’s 105 degrees.

The MSI Bravo 15 costs $900 and is a powerful little laptop. It does what it’s supposed to do without being very remarkable or original. In contrast, it can run games at playable frame rates and productivity apps for more than six hours on a single battery. It’s portable enough to toss in a bag, and the inclusion of a numeric keypad is a pleasant bonus. You’ll have to dig deep to afford a Razer Blade, but the investment will be worthwhile if you require top-tier performance. The Bravo 15 may not be the most future-proof system on the market, especially as it is straining at the seams to run the latest and best games at 30 frames per second. However, a gaming laptop with such few sacrifices for under $1,000 is rare to find. You should take advantage of your Sam’s Club membership if you already have one. 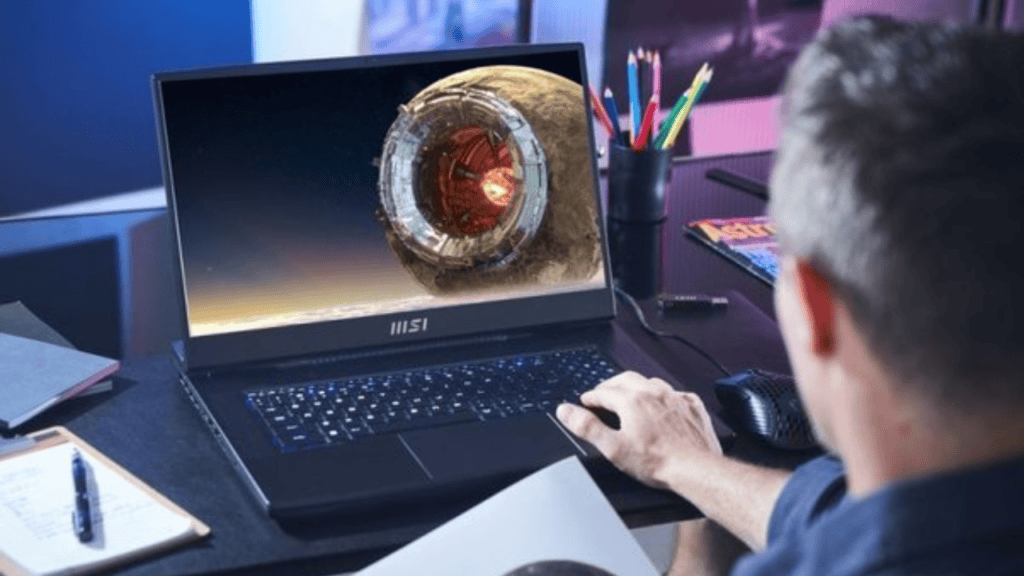 The MSI Bravo 15 doesn’t have the most attractive appearance or screen, but it makes good use of reliable AMD components to provide respectable gaming performance.

The Modern 15 has an impressive 8GB of RAM and a 512GB solid-state drive (SSD). The MSI Modern 15 is excellent as a general purpose laptop and can also be used for casual gaming thanks to its powerful core components.

It’s common knowledge that MSI makes top-notch notebook computers. The company’s forte is making top-tier notebooks for people like gamers and streamers. When it comes to high-end hardware, especially video cards, MSI is largely regarded as an industry expert.

A gaming PC needs at least 8 GB of RAM at the very least. Most recently published games should run well on a system with 8GB RAM, while some may not run at full fidelity and you may have to close other applications to make room.

In general, the faster the RAM, the quicker the computer will run. The rate at which memory transfers data to other components can be accelerated by upgrading the RAM. This means that your computer’s already-efficient processor benefits from an equally-efficient means of communicating with the rest of the machine

How much ram does MSI GE76 reaider ram upgrade comes with