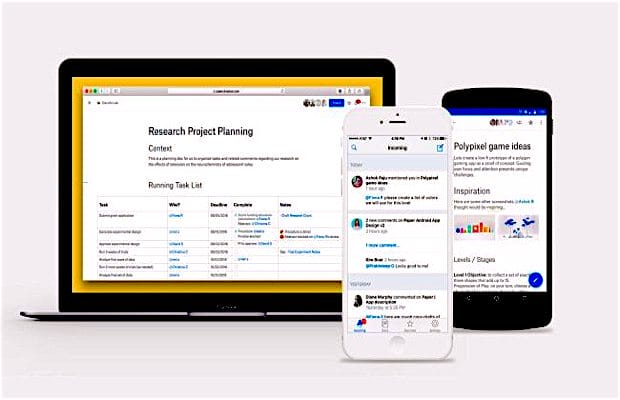 Dropbox Paper: An alternative to Google Docs, Pages, and Evernote

Dropbox is finally doing something that’s going to put its competitors on alert mode. Mainly known for its cloud storage service, Dropbox has come up with “Dropbox Paper”, which is a service that allows users to cooperate on documents in real-time. It is available for download on both iOS and Android. Dropbox launched the beta version of the service last year, and even at that time, many dubbed it as a competitor to Google Docs, Pages, and Evernote.

For iPhones and iPads, the Dropbox Paper requires iOS 8.1 or later. The beta version is up for download for Android, starting today. Dropbox is focusing on real-time collaboration with Paper app. The interface of Dropbox Paper looks more appealing than Google Docs. On Desktop, thanks to the plain white page and toolbar menu, which comes forward as soon as the user highlight the text. It also allows users to embed YouTube videos and SoundCloud clips. Similarly, the app version of Paper is also neat and useful. You can get your team mates on the app and collaborate on a project in real-time. Sounds good for publications.

With the launch of Paper, Dropbox is finally doing some cool stuff. However, the company has already lost time and moolahs on apps like Carousel and Mailbox. We think that Dropbox needs more apps like Paper, which will help it to survive in the enterprise world. The company now needs to push faster updates for Paper, or else it might lose the battle with Google Docs.

Here is how Dropbox explains the new Dropbox Paper app:

Dropbox Paper helps fast-moving teams work together on docs, find relevant information, and stay in sync – even while on the go. Any updates, changes, or feedback you give will all be synced with your docs on paper.dropbox.com.

STAY UP-TO-DATE WITH YOUR TEAM See all your notifications—comments, shares, and @mentions–in one organized list.

POST AND REPLY TO COMMENTS Add, view, and reply to comments so you can have a conversation on the go.

EDIT AND CREATE DOCS Making changes to existing docs or creating a brand new doc is as easy as texting.

NEVER MISS AN UPDATE Favorite docs to pin them to the top of your doc lists— never miss an update on docs you’ve starred.

SHARE YOUR DOCS Keep everyone on the same page by adding others from your team to your docs.

It would be interesting to see how Dropbox Paper fares on the app charts. Would you try it out? Share your views through the comment section below.