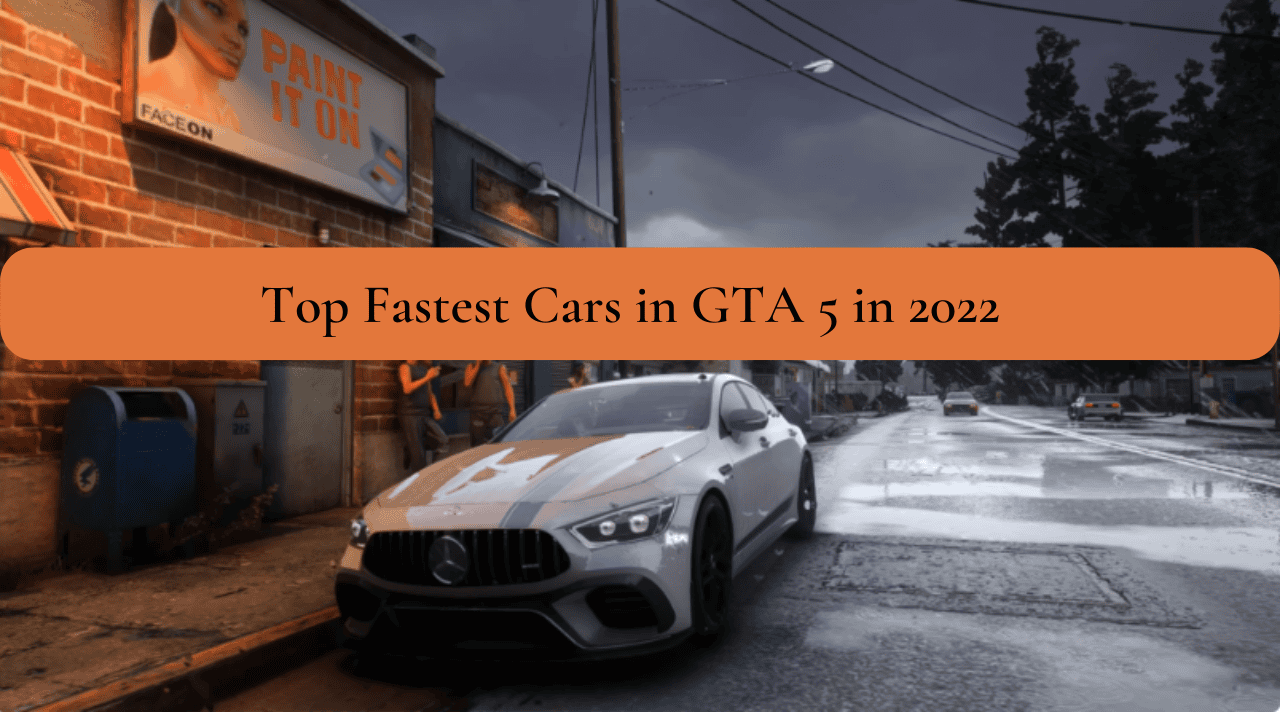 If you’re a gaming enthusiast, GTA 5 is one of those games that never disappear even after 8 years of its existence. Of course, Grand Theft Auto 5’s narrative mode is great. The online version of the game, known as GTA Online, is what’s preserving the game, though. Since you’re here you already know the topic of this article—the quickest vehicles in Grand Theft Auto V and GTA Online.

Finding the quickest vehicles in GTA 5 isn’t that simple, especially given the abundance of choices. The handling of an automobile, in addition to its speed, affects how it performs overall.

We are aware that you won’t have time to test drive every vehicle in GTA 5 to determine which is the quickest. As a result of our study on your behalf, we’re going to list the top 5 fastest vehicles in GTA 5 in 2022 in this post.

Ocelot Pariah, with a top speed of 136 mph, is without a doubt the fastest vehicle in Grand Theft Auto V. Players frequently underrate the Ocelot Pariah due to its unimpressive appearance, yet this vehicle is a performance beast. Ocelot Pariah feels like it is flying as you accelerate to its top speed.

The Grotti Itali RSX overtook the Pfister 811 to become the second-fastest vehicle in GTA 5 Online. As part of the 1.52 Cayo Perico Heist update, which was released in December 2020, the sports automobile was first featured in Grand Theft Auto Online.

Interestingly enough, the Grotti Itali RSX is based on the Ferrari SF90 Stradale and has a top speed of 217.74 km/h (135.5 mph). To add this automobile to your collection of GTA 5 vehicles, however, would require a large financial investment since it costs $3,465,000.

Pfister 811 overtakes Grotti Itali RSX as the quickest vehicle in GTA 5 Online in 2022. You would naturally assume that Pfister would be quicker when comparing Ocelot with Pfister based just on looks, yet the opposite is really true. With a top speed of 133 mph, the Pfister 811 is still the third-fastest automobile in GTA 5 Online.

The Porsche 918-based Pfister 811 was released in GTA 5 Online on June 28th, 2016, as a part of the Further Adventures in Finance and Felony update. Of course, Pfister 811 isn’t the fastest car, but at $1,135,000, it’s still a lot less expensive than Ocelot. So, if you’re able to save a tonne of money in GTA Online, you may also choose the powerful Pfister 811 from Legendary Motorsport.

If you’re a fan of sports cars, you can’t deny that the Principe Deveste Eight is a fantastic vehicle in Grand Theft Auto. Based on the real-life Devel Sixteen, a hypercar that would give Bugatti nightmares, Deveste Eight was created. On February 21, 2019, the Arena War update introduced the supercar.

Principe Deveste Eight is a beast in terms of appearance and even performance. You’ll make other players envy if you drive this automobile around Los Santos, but you’ll have to shell out a tonne of cash to get your hands on it. Deveste Eight, which costs $1,795,000 and has a top speed of 132 mph, is the fourth-fastest automobile in GTA 5 online in 2022.

The Banshee 900R is a beast, but the nicest part about it is how inexpensive it is in comparison to other supercars in GTA Online. Banshee 900R is available from Legendary Motorsport for merely $565,000, and it can be found in your garage.

These are the top 5 quickest vehicles in Grand Theft Auto Online. There are additional fast cars in GTA Online, of course, but the vehicles listed in the list take the top five positions. In the meantime, purchasing a car in GTA Online based just on its appearance is very different than doing so based solely on its specifications.

Last but not least, it is still up to gamers to decide what kind of automobile they want to drive—whether it be one of the quickest vehicles in GTA Online or a gorgeous muscle car.

What Can You Use Tezos (XTZ) For?

Q. What car in GTA V has the best acceleration?

The Grotti Itali RSX is the fastest vehicle in Grand Theft Auto V, and let’s be honest, just looking at its photo should be enough to persuade you that it’s a force to be reckoned with.

Q. What is the fastest car under 1 million in GTA?

The Bravado Banshee 900R, which costs less than $1 million, is the finest and fastest vehicle available in Grand Theft Auto Online.

Although the GTA online market is always changing, there are now three vehicles made particularly to appear and operate like Teslas. The name of the manufacturer, Coil, is a pun on the electric Tesla coil.

All you need to know about Unblocked Games World 2022