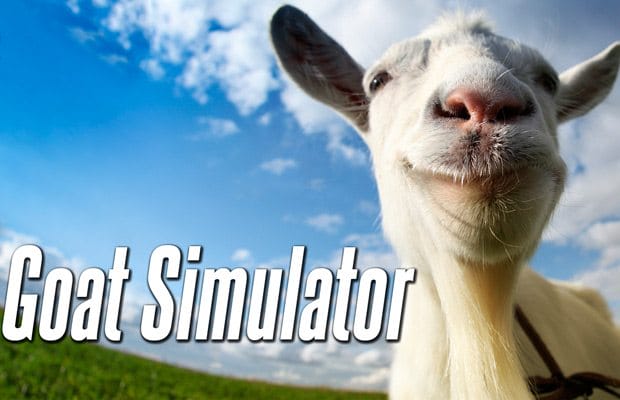 When Goat Simulator was released earlier this year the internet went crazy. People loved it. To say it in PewDiePie’s words: “Call of Duty can go fuck itself”. Earlier today, this awesome game was finally released for Android devices. I’ve been playing this game for the last hour and here’s my first impression.

Goat Simulator is fun. That is, if you’re into immature humour. If you enjoy running around in GTA, blowing up random things trying to kill people, you’ll have a great time playing this game. In the game you can jump, lick things and / or try to destroy everything. And you’ll get points for doing those things. Also, you’re a goat. However, the game is quite buggy but you simply have to deal with it. To quote the developers:

MILLIONS OF BUGS! We’re only eliminating the crash-bugs, everything else is hilarious and we’re keeping it

I’ve tested the game on a LG G3 and a 2013 Nexus 7 and the performance was perfectly fine. Unfortunately the game does not support game pads, the onscreen controls work are perfectly fine though. I personally enjoyed the game and will probably play it some more in the following days. The game itself is basically the same as on PC, so if you’ve played the game already you’ll not discover something new. For all Android users who did not have the chance to play the game yet, playing it on your mobile device is a great experience and tons of fun.

If you’re still not sure if you should give it a try, have a look at PewDiePie’s video:

So should you get the game? Yes, it’s definitely worth the 5$ and you’ll probably get around 1-2 hours of fun. Everything is really random, sometimes stuff just doesn’t work but it the end you’re able to play a goat – and that’s awesome.