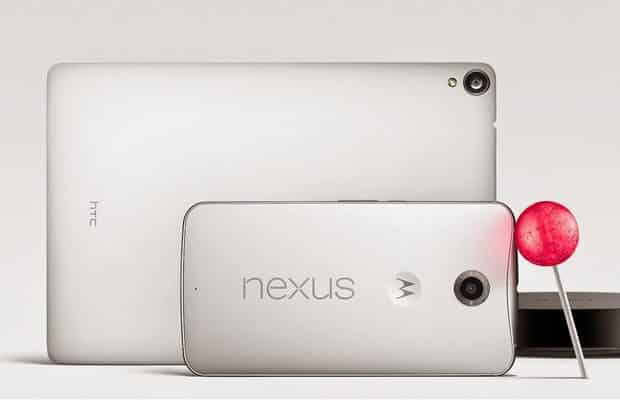 Earlier today Google silently announced its new flagships: Nexus 6 and Nexus 9. In contrast to previous devices, Google did not only increase the size of the display, but also almost doubled the price for the phone. As expected, Nexus 6 will be manufactured by Motorola and Nexus 9 by HTC. Here’s what you can expect:

With the Nexus 6 launch, Google is hopping on the phablet-bandwagon. This doesn’t come as a surprise, as most Android flagships nowadays include displays bigger than 5”. In contrast to previous years, it seems like Google wanted to create a Nexus device that will be able perfectly show the power of Android L. As with previous Nexus devices, the battery will not be removable and you won’t be able to expand storage. The 3.220 mAh battery should, according to Motorola, be able to keep the Nexus 6 running for 24 hours. In addition to that, you’re able to get up to 6 hours of additional battery life by only charging the phone for 15 minutes. You can preorder the phone as of October 29th. The phone will ship in November an starts at $649.

Manufactured by HTC, Google is also launching a new 8.9” tablet, replacing the Nexus 7 and Nexus 10. Surprisingly, the display “only” has a 2.048 x 1.440 resolution in contrast to the 1.440 x 2.560 offered by the Nexus 6. Given that many people use tablets for reading ebooks, I personally don’t understand why Google (or HTC) decided to go with such a “low” resolution. Besides the Tegra K1 chipset, the Nexus 9 doesn’t seem to strive for extremely high specs. Additional information about battery life are not available right now. The tablet will be available as of November 3rd and you will be able to preorder it starting on October 17th.

How to create your own custom Google Now voice commands