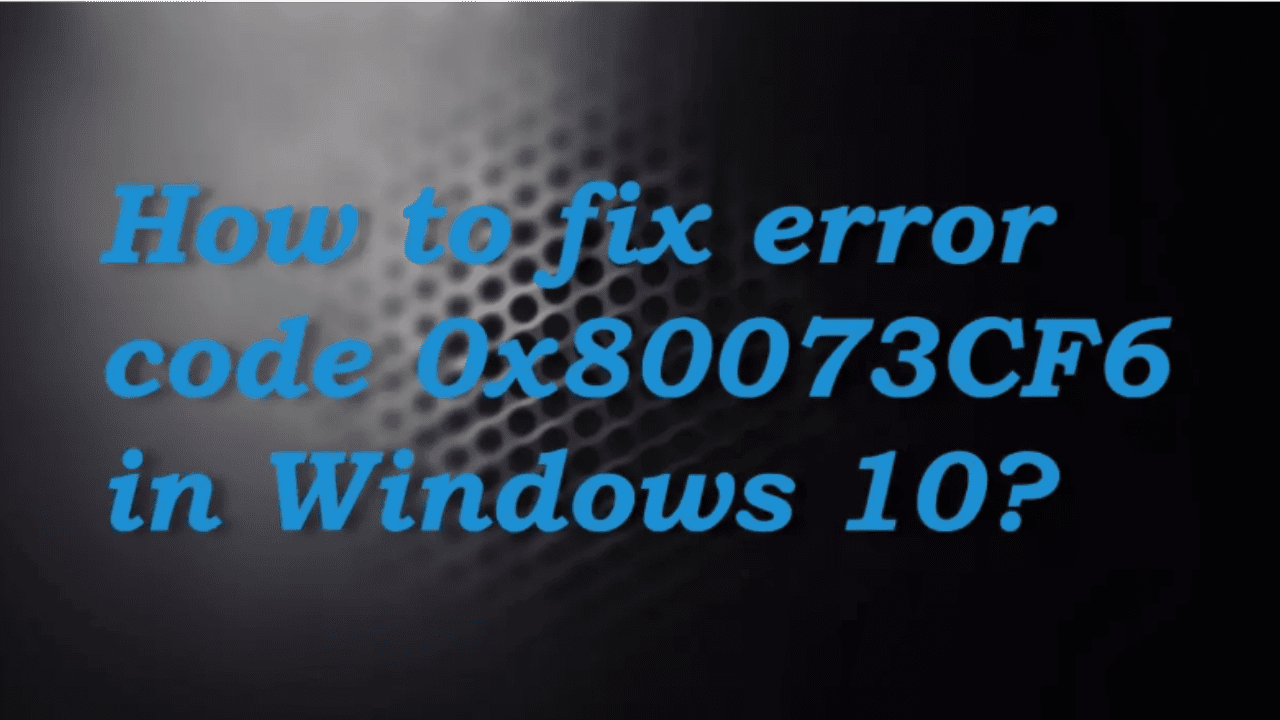 This Xbox error number 0x80073cf6 typically appears following an update to the Xbox app or the Windows 11/10 app. This error notice, nevertheless, could also appear in other circumstances. The error code 0x80073cf6 was seen by certain users when installing a game.

In Windows 10, the failure of specific updates or installs results in the error number 0x80073CF6. Users may encounter this problem when installing, removing, or updating an existing application. When the problem shows, there may be a specific sign that the program cannot be installed or that the process failed. so that you can determine the precise cause of the problem.

You can attempt the remedies offered in this post if you get this issue on your Windows 11/10 PC or Xbox Console.

This problem may be brought on by a general Windows 10 system bug or a specific operating system upgrade. Installing the most recent pending update can resolve any flaws that may still be present in older releases. The issue could potentially be brought on by a specific Windows Store corruption. Corrupted files or dependencies that the Store components employ, this is the most frequent reason for the issue. The Windows shop can be reset to fix the issue.

Corrupt user accounts are yet another issue that might cause a 0x80073CF6 error in Windows. The problem may be entirely resolved by adding additional local users. Additionally, you shouldn’t rule out the possibility of third-party program intervention when separate procedures fail as a result of a potential application conflict. By disabling specific programs or performing a clean PC startup, you can eliminate these problems, which can be helpful.

Remember that system file corruption is a common reason for computer faults as well as the failure of processes and applications. When malware terminates or disappears from the engine, it may leave behind such damaged bits. Additionally, underlying instances of system file corruption can cause serious problems.

Check the status of the Xbox

You should Power Cycle your Xbox Console if the error is occurring while installing a game to see if it fixes the problem. Here are the methods to restart an Xbox console:

Now, check if the issue is fixed. If not, try the next potential fix.

For some people, this method has been effective. You may also give it a try and check whether, following a Microsoft Store reset, you see the problem code 0x80073cf6. The actions listed below will help you with this:

The data associated with your app will be removed when you take the aforementioned step. Therefore, be sure that you have backed up your game data to the cloud before you reset the Microsoft Store.

Delete your other unwanted games

Conflicting programs or games can sometimes cause issues. You can remove any games that are still in your library that you don’t use or play. Additionally, this will make some room on your disc.

Reset your Xbox Console to factory default settings if none of the alternatives above work for you. When you take this action, Xbox will give you the choice between deleting all of your data and keeping it. You can choose your preferred choice. The following are the steps to factory reset the Xbox Console:

The latter option prevents the deletion of your data.

Press Windows key + Q. In the Search box, type WSReset.exe and hit Enter. Update the app and check if an error has been resolved.

The error code 0x80073CF6 in Windows 10 is the failure of particular updates or installations. Users get to experience this issue, installing or uninstalling the program or the existing application getting the update.

Q. How do I fix the stop error code?

How to Build an iOS Development Team