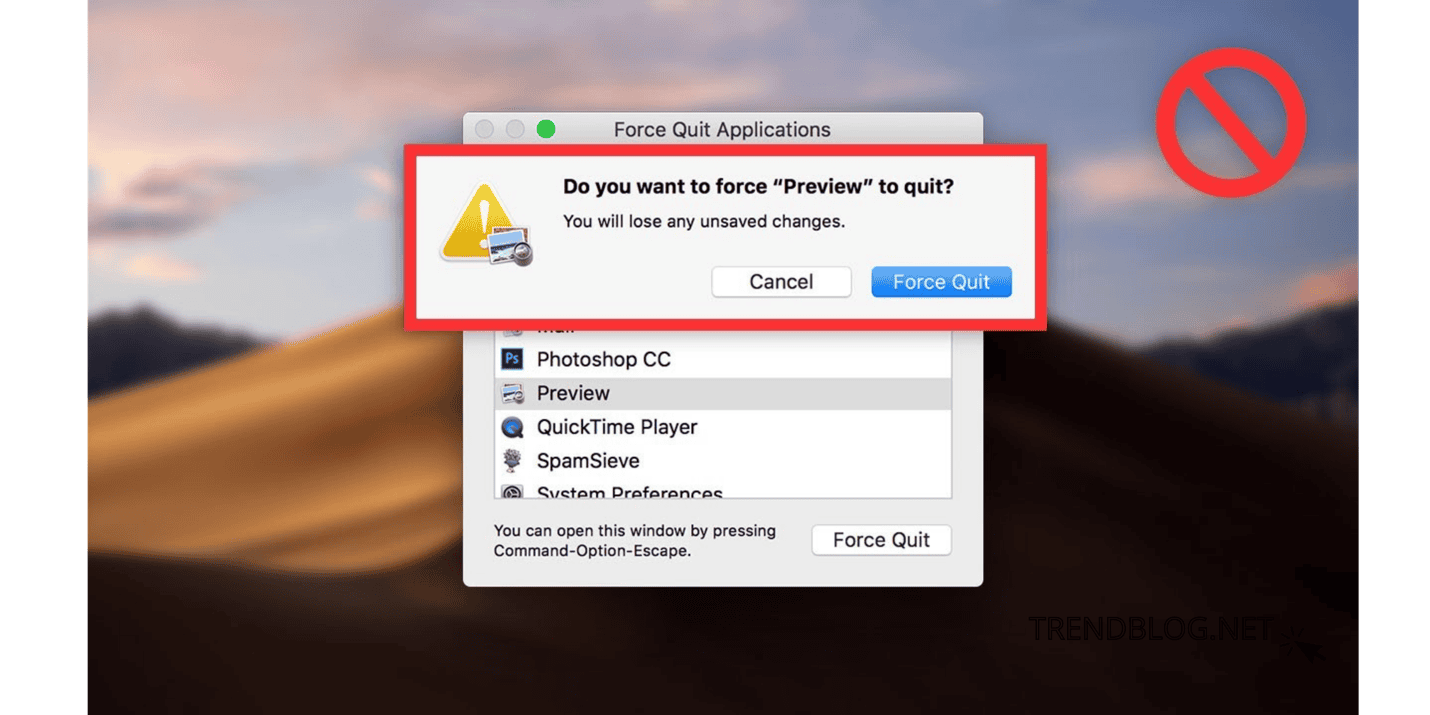 Has an app for the Mac recently become unresponsive? Is it a ‘spinning beach ball’ you see? Doesn’t your computer’s mouse operate anymore? Each of these signs point to the fact that an app has ceased operating properly, so you must Force Quit it in order to proceed. Force Stop on a Mac isn’t as simple as it seems. Or, if you’re coming from a PC background, how do you utilise alt delete on the Mac?

As a final option for sluggish apps, Windows users are acquainted with the standard Ctrl+Alt+Delete key sequence. If you can even locate those keys on your Mac keyboard, using Ctrl+Alt+Delete will have no effect. On a Mac, the Ctrl key is identical to a Command key, because there isn’t generally a Delete key.

So, how do you put a stop to a Mac’s running process? Force Quitting a programme on a Mac may be accomplished in a variety of ways. Instead of using the power switch, we’ll explain you many methods for locating and shutting off troublesome applications.

Performing a complete rebuild of macOS may be worth your while if you discover that certain programmes are becoming sluggish on a frequent basis, while not always this problematic. It’s a drastic measure, but it might end up saving a huge amount of time and aggravation.

How to Stop an App from Running in Mac OS

Force-quitting a programme is straightforward, though the steps differ depending on which kind of macOS you’re on (Big Sur, Catalina, etc.). You may force an app to shut down in a number of ways on macOS. These topics will be discussed in more detail below. 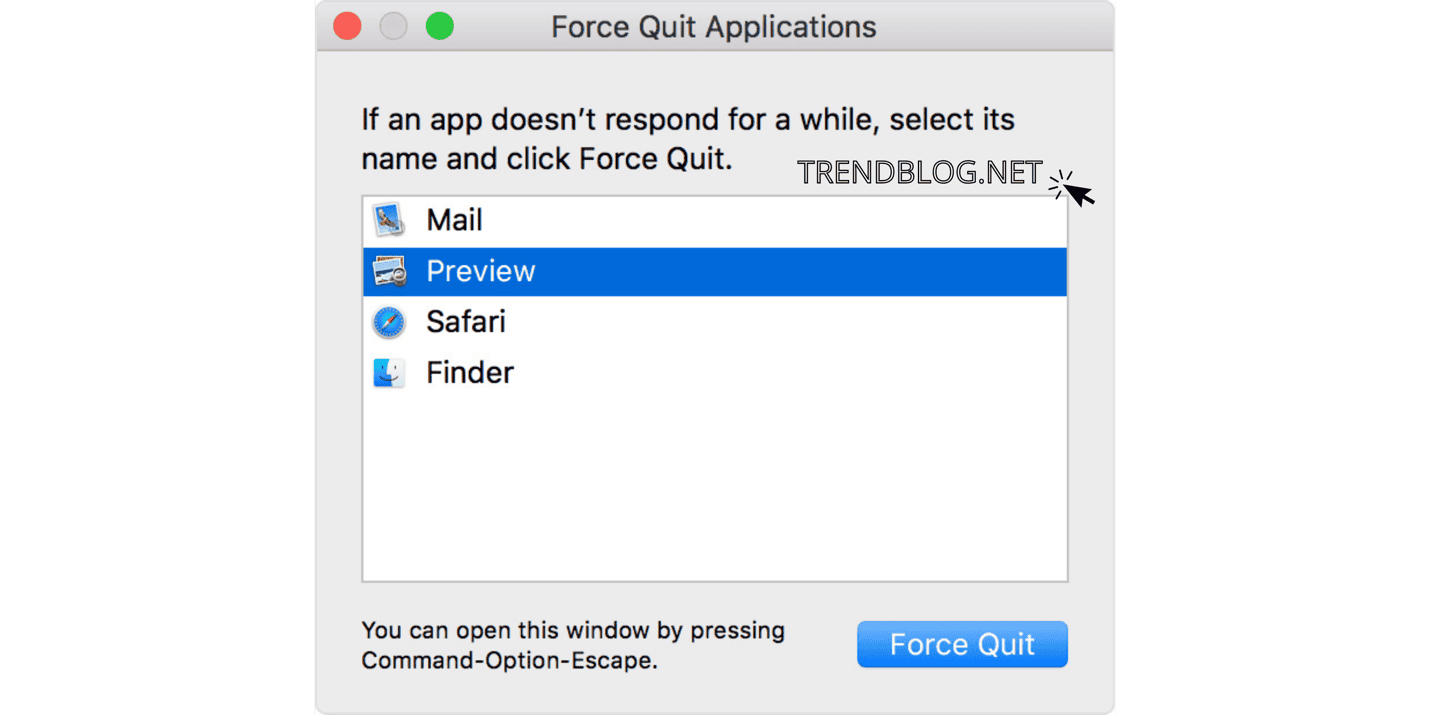 To begin, make sure you’re correctly shutting the programme before moving on to the next step. Just below at the display, you’ll see a list of all the apps that are currently open on your Mac. We call this area the “Dock.” The methods below should help you close the app.

To click on the app, hold down the ‘control’ button while using the mouse or trackpad.

You’ll note that ‘Quit’ becomes ‘Force-Quit’ when you hold down the Option key. If you choose ‘Force-Quit,’ the programme will stop down immediately.

This isn’t always the case, however. It’s possible you’ll get an error message or the programme won’t work at all. So long as that’s the case, you should not be concerned. We’ve got the solutions right here for you.

Is Forced Quitting a Good Idea?

Making a frozen programme close is comparable to treating the symptoms of a virus rather than curing it. We have to look at the broad picture and figure out what’s causing the issue and how to fix it while also figuring out how to prevent it from occurring again in the future.

The most common cause of frozen apps on a Mac is a shortage of RAM, or, to put it another way, a shortage in computer capacity relative to the amount of programmes you typically have open on the system. As a result, your system will become sluggish if it has to use all of its available resources to complete the job. As if RAM were a real workbench, that’s how you should see it. The more the available storage (memory), the greater the number of active projects you may have. Is there less room now? Reduced capacity for multitasking.

Making Mac shut down the programme solves the issue, but there are risks. Traditional programme closing cleans up everything running all the time and prompts you to save your work before it disappears. Force-closing a Mac may result in data loss or disc corruption if you don’t backup beforehand. Even if the impact is limited to the one application, it might still be troublesome. 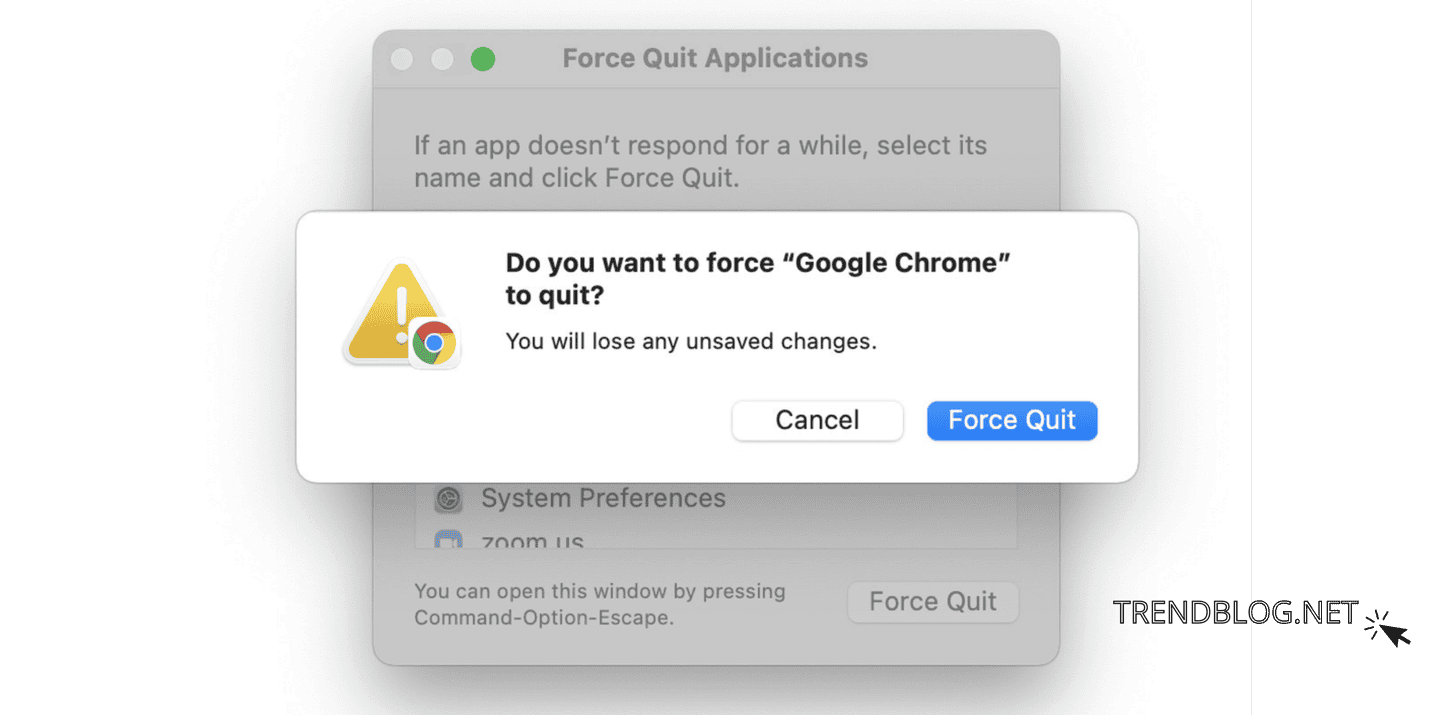 The usage of a clever programme such as Parallels Toolbox may help you clear up unneeded ram just on go and avoid apps from freezing repeatedly. Everyday tasks like downloading music or movies via sites such as YouTube, capturing screenshots, recording videos, and improving your Mac’s performance are all included in this bundle. You’ll also get plenty of other essential tools for your Mac.

Utilize the Mac menu to terminate an app is a simple and universal solution. This technique has the advantage of promptly closing the problematic programme regardless of how it behaves. 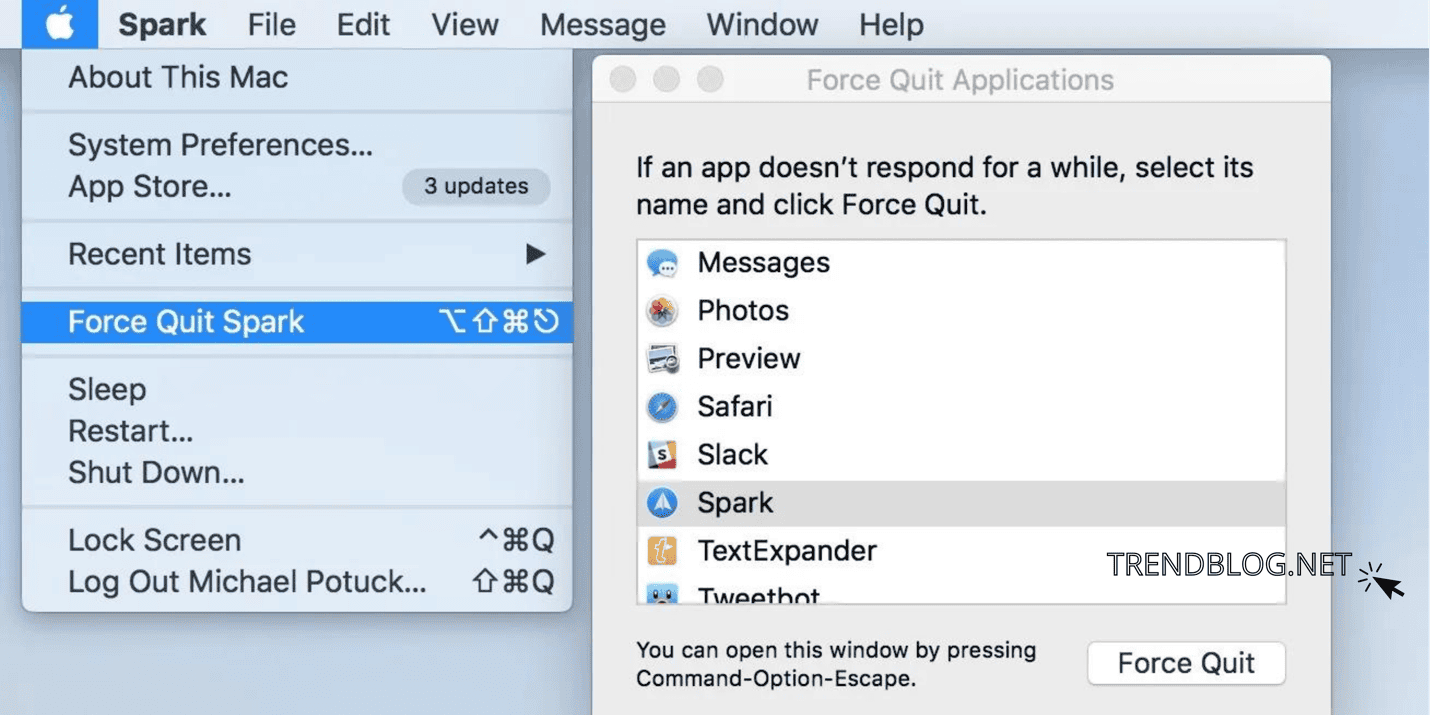 The problematic application will be closed as soon as you’ve finished the above procedures. The application will now reopen and you may continue working there. The ability to resume wherever you got off may be depending just on programme you’re using.

If you’ve never used Activity Monitor before, it operates quite similarly to Windows’ Task Manager or Linux’s ‘System Monitor.’ In essence, the Activity Monitor gives you complete control over all running programmes and services.

If you’re having difficulties locating the Activity Monitor software, you may utilise Spotlight on your Mac to rapidly locate it. Use your keyboard’s Command+Space Bar key combination to bring up the search bar, then type in Activity Monitor to find it.

For those who prefer to utilise a keyboard shortcut to end an application abruptly, this is a simple procedure to follow. This procedure is pretty similar to the first one described before. It is, however, a shortened route. 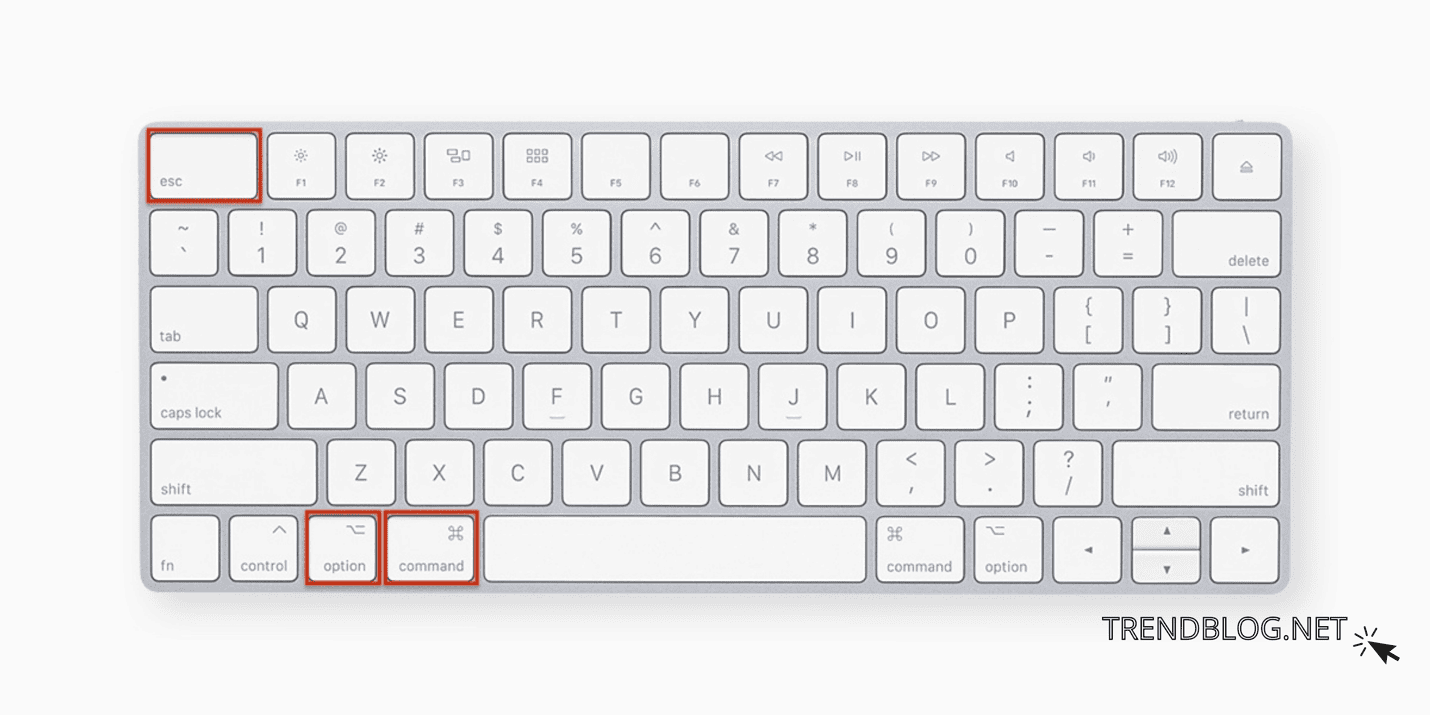 Before you do anything further, decide which programme is being unresponsive. Clearly right just on app icon inside the Dock to bring up the context menu, and then choose ‘Show All Windows,’ depending on which programme isn’t working properly.

Hold it down a buttons ‘Command’ + ‘Option’ + ‘Shift’ + ‘Escape’ for several seconds after the programme is in the forefront to force it to shut.

Utilizing any of the five solutions listed above should resolve your issue and allow you to return to work as soon as possible by immediately shutting the non-responsive software on your system.

How to deal with a frozen Mac

When an app has a problem, it might bring down your whole system. Even though these situations are very uncommon, they do occur.

If a programme refuses to force-quit, and your Macintosh is sluggish as a result, your only choice is to lock side button for several seconds.

When you push the power button on your computer, a message is delivered to inform it to shut down. Once the system has responded, the machine is normally put to sleep. Resume, Rest, or Power Down are all available when you keep your button pressed for a longer period of time. It’s possible that even this option will be unavailable in a catastrophic system failure.

Therefore, the last option is to keep pressing till the machine shuts off altogether. While this will enable you to reboot and regain access to your Mac, any unsaved data may be lost due to the rapid nature of the shutdown.

It’s not ideal, but there are instances when it’s the only option to start things moving again.

Note that unticking the option next to Reopen windows when signing back in will prevent the problematic programme from reopening when the machine restarts.

That’s all there is to it. Here are some basic methods to keep your Mac running smoothly.

Check out our Article “Gaming on Your Macbook? Ensure Your Safeness While Doing It“

I am Happy Hogan, content writer. I have been writing for the last two years and love it! My work is characterized by a concise style that avoids unnecessary words or phrases. My articles are well researched with extensive use of facts, statistics and quotes from experts in the field to back up my arguments. I believe in using plain language which is easy to read and understand.
Prev Post

How Smartphone Convenience Has Exponentially Spread the Fantasy Sports Trend

How to Split Screen or Slide Over on Ipad (Updated 2021)