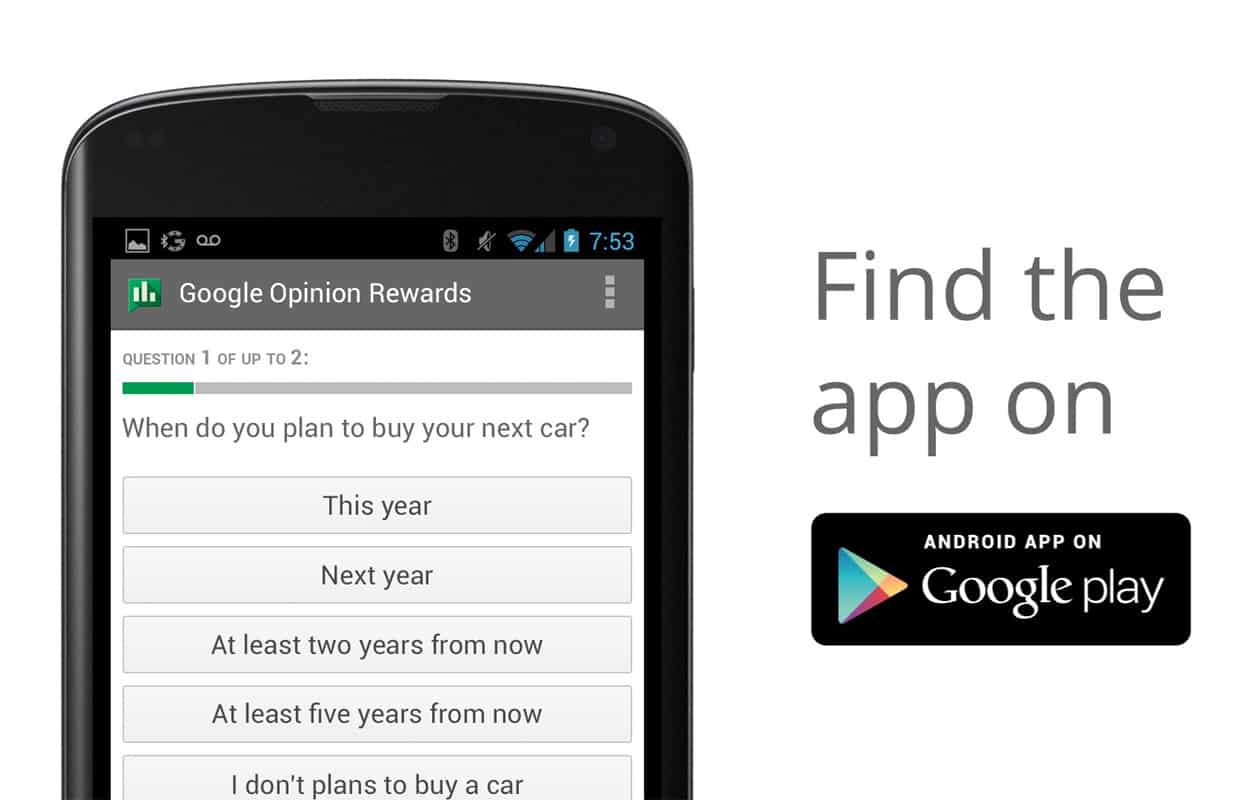 How to get free Google Play Credit with Google Opinion Rewards

Google Opinion Rewards is a great app that let’s you answer customer surveys and earn free Google Play credit while doing so. The concept is pretty straightforward: Google is sending you customer surveys based on places that you visit, things that you buy or look for online. Now I know that many of you are scared now, but Google is tracking most of this stuff already, mostly for Ad purposes. With customer surveys you’re basically giving them additional information, but at least you’re getting paid to do so. At most, you need to answer 10 questions per survey and you’ll receive up to $ 1.00 in Google Play credits. There is no pay-out limit, so starting from the first survey, you’ll be able to use the Google Play credit for apps, in-app purchases, books or anything else that you can find on Google Play. But beware – Google Opinion Rewards won’t make you rich. On average, you’ll receive one survey per week, although results may vary based on your data and habits.

In the following I’ll explain how to sign-up for Google Opinion Rewards, thinks you need to kind in mind, tricks to get more surveys as well as fixing some language problems. But let’s start with a video:

Signing up for Google Opinion Rewards is quite easy, you basically only need two things:

Please be aware that Google Opinion Rewards might use the language of your home country as defined in your Google Wallet account. When I first installed the app, everything was in Dutch (I’m German, not Dutch) and there was no way for me to switch the language. After researching this issue on Google, I found that many people have this problem, but no solution was available. Only after thoroughly checking my Wallet account, I saw that an old address of mine (when I was living in the Netherlands) was setup as my home address in the Settings. Mind you, there was no foreign address entered in my address book and I never used any Google products in Dutch – so it was really tricky to find this one. Anyhow, let’s get started:

After setting everything up, you have to wait for the first surveys to pop up. While you cannot influence this directly, there are ways to improve your chances of getting a survey.

How to get more Google Opinions surveys

After browsing trough different forums and website, I found a few things which lead to people getting more surveys. This is what I found:

I hope that I was able to give you a good start for Google Opinion Surveys. If you have any additional ideas to get more surveys, please feel free to share them in the comment section below.

Time to bring your slow Android phone back to life!