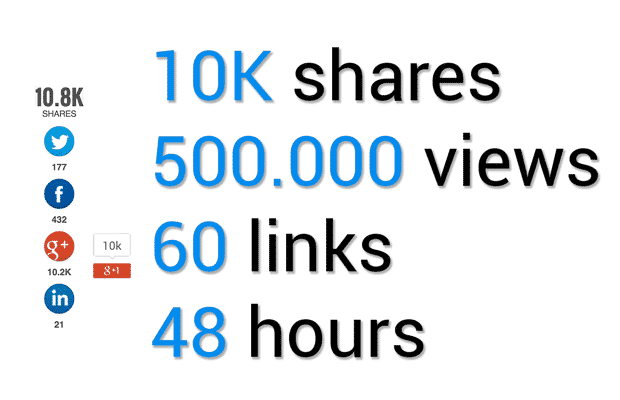 In the past 48 hours we have seen something that every blogger dreams about every night: One of our recent posts went viral.

Unfortunately, only few blogs or bloggers actually describe the process of a post going viral, including how it all started and what it meant for the blog. In this post I will walk you through all the steps of our post spreading online and all the numbers related to it.

How an infographic went viral

Every blogger, SEO, online marketer or whatnot knows that infographics are a great way to attract visitors to your blog, generate a decent amount of social shares and, hopefully, get some high-quality inbound links to your website. But still it is quite difficult to attract a lot of quality links and boatloads of social shares. There are several factors one should think about when creating a post like this and sharing it with the world: relevance, timing, quality and outreach. But more on that later down the post. 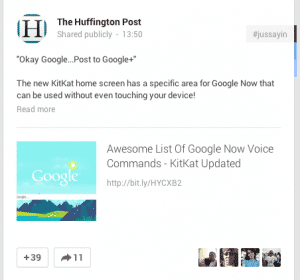 Numbers and facts – the exciting stuff

Without further ado, let’s jump straight into the facts and stats.

The Timeline – how exactly it all happened

Now that you know what happened, let’s look at how the post got popular, shared and talked about.

Google Plus – this started everything

I have previously mentioned relevance being one of the “secrets” of a post going viral. Our infographic was about the new Android Google Now voice commands. And who would be the ideal audience? Google and Android lovers. Hence, we started off our journey on Google Plus in the biggest Android community with almost 240.000 members.

Posting something to such a big community means that your post could simply be overlooked, since there is somebody posting a new picture or link every minute. We had to get traction to get seen.

One thing that helped a lot was the size of the infographic, which was posted in the Android community as an image, making the post visually more prominent compared to regular links. To put it simply, a big post takes more screen-space.

The post got the traction we were hoping for. Within the first two to three hours the infographic had around 100 +1’s and around 20-30 shares.

Here’s a short screencast of the infographic spreading on Google Plus:

Pro Tip: When posting a link to Google Plus, always post an appealing picture with your link in the text box above it. This will ensure that all +1’s and shares will be accounted to your website. Include hashtags and an interesting and inviting headline. If you want to hide the link to make it look less spammy, put three relevant hashtags two lines under your headline and put your link beneath the hashtags.

All fan-communities are interconnected. As soon as we got traction on Google Plus the infographic got shared on Reddit.

Reddit and Google Plus – the ultimate social combo for blogs

Reddit was most likely the reason for the infographic going viral. And something really interesting has happened. Instead of posting the direct link to the blog post, a redditor has posted a link to my original Google Plus post.

There is no way you can influence Reddit. Either the Reddit community loves your post… or not. It’s simple as that. And apparently people loved ours. We got voted to the top or /r/android and held the 1st position for around 8 hours. FYI, this subreddit has more than 330.000 subscribers.

Now this is already fortunate. But even better was the fact that the top-voted comment within the thread was “And the source that’s easier to read and scroll” with a direct link to the blog post.

Just to clarify, the action on Reddit started almost simultaneously with Google+, the latter still going on as I write this.

Once we got traction on social networks and influencers started sharing our post we saw two things happening: an increase in traffic and an incoming stream of blogs linking to our infographic.

One may think that getting links is happening by itself, “You just get them”. Well, this is partially true. Some blogs will link to you directly, but some will link to other blogs that have previously linked to you. Of course, this is also pretty good. In terms of SEO, in this scenario you still get the so-called “secondary link-juice”. But a direct link from an authoritative website is, obviously, much better. And this is where the fun starts: we started intercepting links.

Once we knew that we started getting featured on authoritative blogs we saw something interesting happening: other big blogs didn’t link to the original post. Instead, they linked to the blogs that linked to us. Luckily, we knew how get these blogs to link directly to us. We asked them to.

What we did was the following:

Doing this for a couple of hours got us at least 10 high-quality links, two of which were from Technorati. Getting links from a website like Technorati is a dream-come-true for every blogger.

As soon as this post will be published I will go back to working through my list and trying to get us even more links.

Why all of the above worked for us

As previously mentioned, we found that there are four success factors when it comes to making an infographic (or blog post) go viral: Timing, relevance, quality and outreach.

Our infographic about the Google Now update was published a couple of days after the update itself. Everybody was still talking about it, it was still a hot topic.

Also, our main audience is in from United States. Hence, we have posted the infographic on Google+ at around 7PM PST.

If you want your post to spread online, start with the most relevant place you can think of, the more specific the better.

We have invested quite some time into creating the infographic, making it as informative and good looking as possible. This might be obvious, but nobody shares something that looks ugly and low-quality.

The infographic wouldn’t have gone viral if we didn’t make the first step of actually reaching out to the audience saying “hey, look at what we have made for you!”. Don’t expect other people to make this first step for you (if you aren’t a huge blog with millions of readers like Mashable).

Also, reach out to websites that don’t link directly to you and kindly ask them to give you a link. In our case every single one agreed and thanked us for putting the infographic together.

I hope that this post helped you to understand the process behind a post going viral. It involved posting the right content at the right time in the right place, reaching the right people that will, in the end, share your content and make it go viral.

There is no way you can predict how your post will perform. Also, you can’t create a “viral post”. However, you can do all you can to help it go viral.

If there something in this post I haven’t described clear enough, please let me know in the comments and I will adjust the post.

Also, if you think that this post is worth sharing, I would appreciate it if you could share it with your friends and followers.

How To Root Any Google Nexus Device

This is a clear indication that “quality is king” is still a relevant thing in internet marketing.
You can even work your way to the top with a close-to free design such as this hot topix theme 😉

Great read! My new site just had a mini “viral” moment on reddit and its a great feeling…ofcourse the figures compare nothing to yours but hey, gotta start somewhere right?..lol

I learned a lot from this article. Thanks a lot for sharing how you managed to accomplish becoming viral. I love it when people share their secrets.

wow great post I am inspired I am new in the world of SEO thank you for this please also check my website if you have suggestion how to improve my site please advise thank you Visist my website here http://goo.gl/tSSTgS