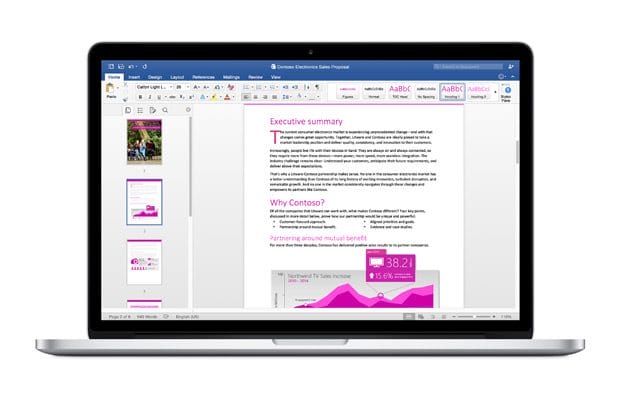 It’s finally here. Microsoft officially launched Office 2016 for Mac today. Microsoft 365 subscribers are able to download the latest Office for Mac 2016 version as of today. Unfortunately you have to wait until September for the standalone version. This is great news for Mac users, as the last Office version was from 2011 and, honestly speaking, massively outdated and unusable. While the software back in the days was significantly different than its Windows equivalent, Office 2016 for Mac is a perfect mix between Mac usability and the endless list of Office for Windows features.

Office 2016 for Mac comes with five programs: Word, Excel, Powerpoint, Outlook and OneNote. While probably everybody is familiar with the first 4 apps, OneNote is a newcomer in the Office for Mac world. It’s – like the name already implies – a note taking program with which you can insert files, draw images or simply add notes. It’s basically like an Evernote from Microsoft.

I’ve been testing the Office 2016 for Mac Beta for a few months and I work with Office 2014 for Windows on an everyday basis. From my experience I can honestly say that Office for Mac is finally really close to what I experience in Windows. The programs are nicely designed, optimised for high-res Retina displays and play were well together with the typical Mac features like multi-touch gestures.

So how can you get Office 2016 for Mac? There are basically two ways: Either you subscribe to Microsoft’s Office 365 or wait for the standalone release in September. While to prices for the standalone version are not available yet, you can get an Office 365 subscription starting at $6.99 / month or $69.99 / year for personal licence. A five user licence (working on 5 PCs / Macs) is available for $9.99 / month or $99.99 / year. If you’re a student, you might be eligible for a free education licence. Prices for Office 365 on Amazon are also cheaper than directly at Microsoft.

So .. the big question is wether you should get Office 2016 for Mac or stick to Apple’s alternative like Keynote or Numbers. Personally, I can highly recommend Office 2016 for Mac if you want to use your Mac for business purposes. While Google’s and Apple’s products come for free, Microsoft Office is still the gold-standard for many businesses. I’m happy that Mac finally has a great office suite and look forward to working with it.