You are here: Home / Android / The Best Android Smartphone 2013 – One Week With The Google Nexus 5
Warning: count(): Parameter must be an array or an object that implements Countable in /home/customer/www/trendblog.net/public_html/wp-content/plugins/shortcodes-ui/shortcode-maker.php on line 688


You have probably read a lot of reviews already, so you are most likely familiar with all tech specs and features the Nexus 5 has to offer. This review is slightly different. In this post I want to talk to you about how it felt for me to switch from my old Nexus 4 to the new Nexus 5 and what differences I have noticed so far.

So, last week I have finally received my brand new Google Nexus 5 I have been waiting three weeks for. Apparently Google hasn’t learned from last year’s Nexus 4 shipping disaster… The same day I sold my Nexus 4. And I haven’t missed it for a second.

The Nexus 5 is probably the best Android device on the market so far. Usually, when we write product reviews, we are weighting out pros and cons of a given product and then summarise everything for you to read and enjoy it. But in the case of the Nexus 5 I was struggling. After using the device for a week… I haven’t found any significant downsides to it. Not a single annoyance, no flaws, no lags, no deal-breakers. This was quite a surprise for me, especially at such a low price of just $340 (€349).

Just to clarify, I’m not crazy about tech specs. Of course, specs matter, but what matters most is the experience. Using my new Nexus 5 feels good.

The screen is way crispier and more colourful. The viewing experience reminds me a lot of the Nexus 7 screen, which is also very crisp, colourful and bright. Actually, the Nexus 5’s exterior looks a lot like the Nexus 7 with its soft-touch back (which is great) and the way the camera looks like. A small thing that has also changed from the Nexus 4 is the orientation of the USB port at the bottom of the device, which has been flipped upside down to match Nexus 7’s port.

You will SEE the difference

The Nexus 5 has a lot of screen space compared to the Nexus 4. This is not only due to the fact that the screen is 1” larger, but also because the new Google Experience Launcher has a transparent navigation and status bar, which makes the screen look much bigger.

Using the Nexus 5 for a week I haven’t noticed any lag when it comes to scrolling and screen animations. Everything feels much smoother compared to the Nexus 4. The screen, combined with smooth animations and scrolling, is incredible. You notice the difference immediately.

A huge deal-breaker for the Nexus 4 was its relatively bad battery life. After a full day using the N4 I was usually left with about 10-20% of battery left. In comparison, using the Nexus 5 actively throughout the day leaves around 30-40% at the end of the day. 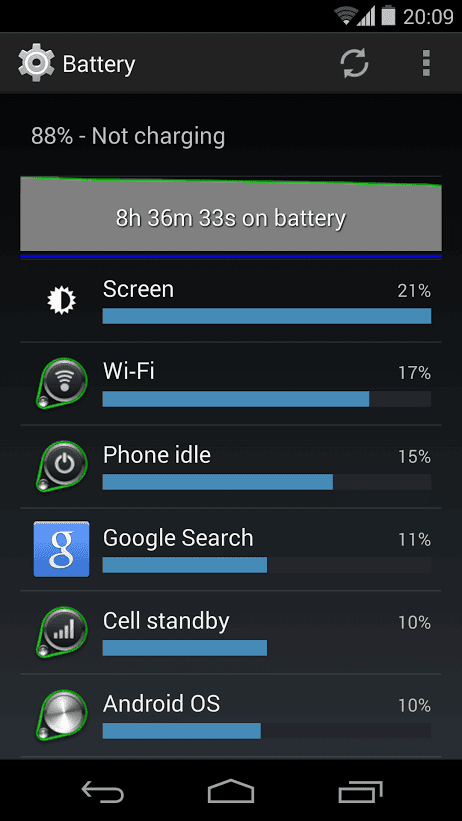 To be honest, I had to think a lot about the downsides of the Nexus 5. I didn’t have any on top of my mind. Since a review is supposed to criticise a product, here are some minor things I found:

I have expected the camera to be slightly better than it is now. Don’t get me wrong, the Nexus 5 camera is way better than the one of the Nexus 4. The Nexus 5’s camera shows a lot more detail on pictures, shadows, mid-tones and highlights look way more balanced. Low-light performance is also much better compared to the Nexus 4. Now you can actually take photos in a dark room without them looking terrible.

The only thing that bothers me with the Nexus 5 camera is its auto-focus, which is sometimes focusing on the wrong object at close distance.

Of course, 16/32 GB of storage is more than enough for most people, but I can imagine that some power-users would prefer to have a Nexus 5 with 64GB of storage. The fact hat the Nexus 5 ships with either 16 or 32GB shouldn’t be a deal-breaker, though. As with every Nexus devices, you are not able to add storage using a SD card so keep that in mind when deciding which Nexus 5 to get.

The Nexus 5 is probably the best Android device you will currently find on the market. Nothing can beat the Nexus 5 experience, especially at such a low price. I can recommend the Nexus 5 to every Android lover. For those of you who think if it’s worth it to upgrade from a Nexus 4 to a Nexus 5… It’s worth it. Definitely.

Check out the Nexus 5!