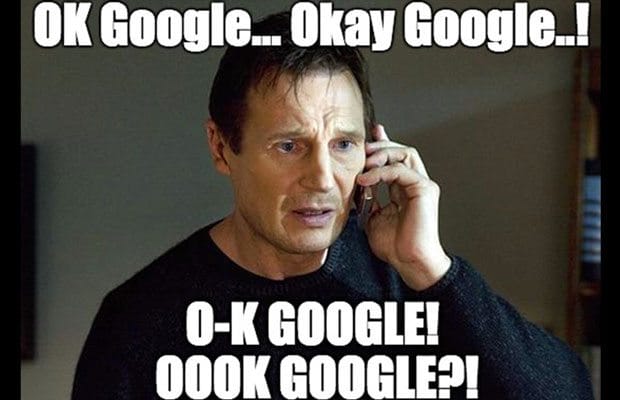 Home
Guides
OK Google Not Working? Here Is How To Fix It

OK Google refers to the voice command needed to activate the Google Now voice search feature on your Android smartphone. The voice command is usually usable after having opened the Google search app, however, certain handsets allow the feature to be used even when the phone is in sleep mode. While this is certainly a cool feature and has been advertised to great effect by Google, there have been some implementation glitches and obstacles experienced by several users. Today we are tackling the somewhat tricky area of what to do in order to get your OK Google feature working again when it just won’t pay attention and carry out your orders! The reason the issue is tricky is that there can be several problems and changes to your settings the may be causing issues to arise. Nevertheless, we will endeavor to get that smartphone to (and we are paraphrasing the great Eric Cartman here) ‘respect your arthoritah!’

However, before we get into these, we first want to deal with an issue that isn’t really a functionality problem, but caused several users difficulties at the start because of a lack of awareness of how the product worked. We are talking about the Trusted voice settings.

Get OK Google to work on your lock screen

When OK Google was first released, several users where upset because they could not use their OK Google from their locked phone screen, even though they had seen the happy campers in the Google advertisements do just this. This was not a glitch but rather an additional security setting added in by Google. In order to get this to work, users needed to enable the ‘Trusted Voice’ setting. To check this is enabled on your phone, go to:

If you find that your Android voice commands are still not working from the locked screen on your phone, you may have one of several phones that do not allow this functionality, such as the Nexus 6, Moto X, Galaxy Note 4 and Note Edge.

And now, on with the Solutions

Like we said, there can be a few issues at work when it comes to problems with OK Google functionality, so we are going to prioritize them in terms of popularity (or perhaps notoriety is a better word here.)

In previous iterations of the Google voice search feature, it was only able to respond to US English. That has since changed, with Google rolling out dozens of other languages since 2014 (although many languages are still not supported). However, this feature needs to be enabled, so if you don’t speak English as a first language, this may be the issue. In order to enable other languages, you should first ensure you have the latest feature of the Google Search App. Then go to:

Naturally, as a voice command application, OK Google relies heavily on the presence of an effective and fully functional microphone. The problems you may be experiencing with your microphone may be related software or may be hardware based. When you have the Google app open, the microphone status is displayed thanks to an icon located on the right hand side of the search bar. It should be drawn in an unbroken line if it is working correctly. If it is made up of a broken line, there may be an issue with your microphone. If the problem stems from the phone itself, you should refer back to your phones user manual to help resolve it, or failing that, the phone manufacturer. Before you do that, however, go through these simple checks.

You might not realize it, but small bits of dust and debris can clog up the tiny hole that leads to your microphones. Use a safety pin or needle to investigate and dislodge anything that may be preventing good auditory reception.

Several apps run continuously on your phone and may be contributing to low or even high level background noise that is interfering with your microphone. Have a look at what apps are running and disable any you think might be creating noise, then check to see if your android commands are still not working.

3. Lastly, for all you Samsung users

So it looks like the S voice feature on Samsung phone isn’t always compatible with Google Now. And like a cruel divorce, this issue will force you to choose your favorite child. Unfortunately, disabling S Voice doesn’t do the trick normally. You will likely have to remove it altogether to fix OK Google recognition.

We hope this article helped you get your futuristic visions of voice commands for everything back on track. If you have an issue that wasn’t mentioned here, or you found a different solution for one of these problems, please let us know in the comments below. We are also aware that there have been some functionality clashes between OK Google and specific settings in certain apps, but we didn’t have time to get into all of them here. If you have had issues with some of these and resolved them, please let us know!