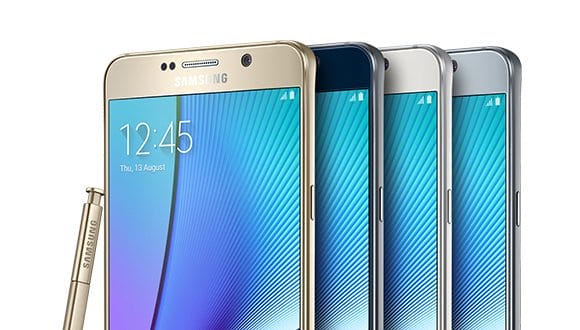 Home
Android
Samsung Galaxy Note 6: expected launch for the US and rumoured specifications

Samsung’s upcoming flagship, the Galaxy Note 6 was earlier tipped to hit the sales shelve in July. However, in a latest update, the device will be up for sale in August for the US market. This report seems pretty believable as the Note 5 was also launched in August, last year.

This new report about the August launch comes from the famous leakster, Evan Blass, who is famous for leaking details for the upcoming devices. For now, there is not much information about the pricing and availability of the upcoming smartphone. However, going by Samsung’s previous phones, the device might be priced around $700 without a contract.

Rumoured Specifications for the Galaxy Note 6:

In terms of expected specifications, the Samsung Galaxy Note 6 might come with water resistance and 5.8-inch Quad HD (1440 x 2560 pixels) display. It might come powered by a Snapdragon 823, or an Exynos 8890 chipset clubbed with 6GB of RAM, 12MP rear camera (similar to the one on Galaxy S7 line-up), and USB Type-C port. The next edition of the Galaxy Note will be backed by a 4,000mAh of battery and the storage capacity might go up to 256GB. Needless to say, the device will be featuring S Stylus.

The above-mentioned info has not been confirmed by Samsung yet, so we should take it with a pinch of salt. The Galaxy S7 lineup proved to be profitable for Samsung in terms of sales. Are you looking forward to the Samsung Galaxy Note 6 launch? Let us know through the comment section below.