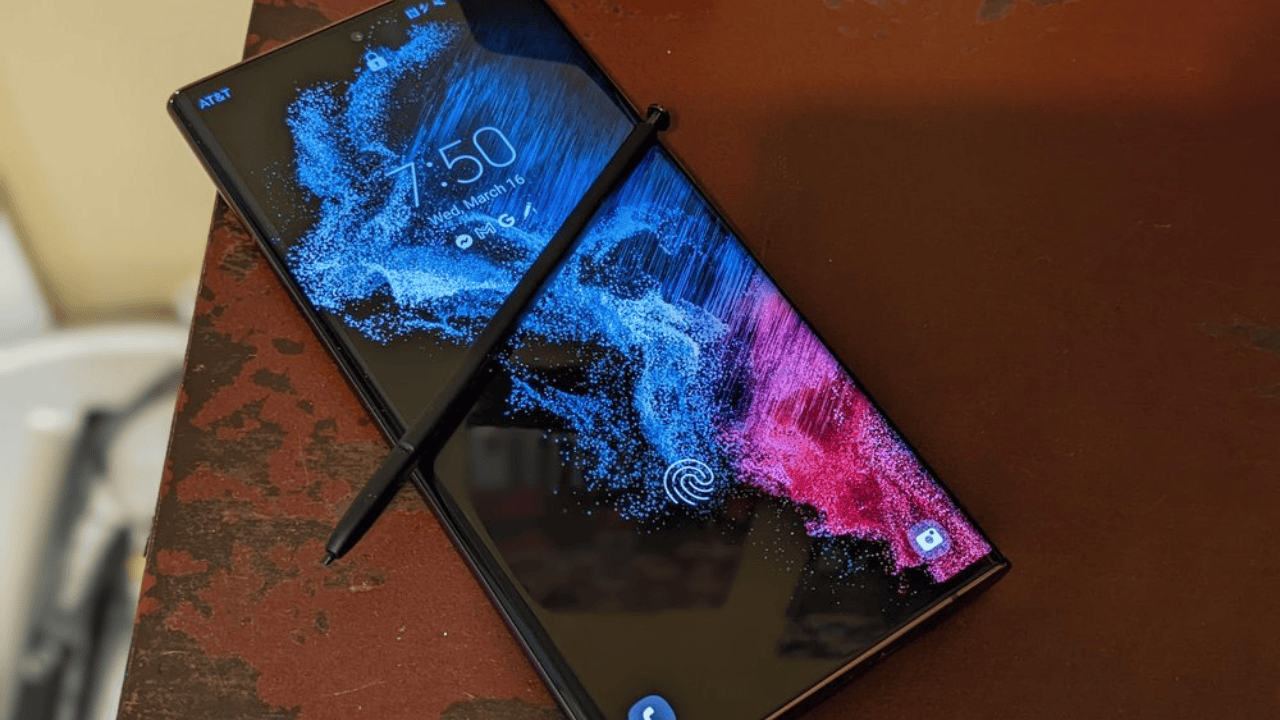 Samsung galaxy s22 ultra review, along with the regular Galaxy S22 and the upgraded Galaxy S22+, Samsung also introduced the flagship-level Galaxy S22 Ultra. The Galaxy S22 Ultra’s standout feature is its compatibility with the S Pen stylus, which was previously only available on Galaxy Note devices. All previous Galaxy flagships in the Indian market have used Samsung’s own Exynos SoCs, but Samsung has broken with tradition by opting to use Qualcomm’s Snapdragon 8 Gen 1 instead. After having a generally favourable initial experience with the smartphone, I am now curious to see how the Galaxy S22 Ultra stacks up in everyday use. 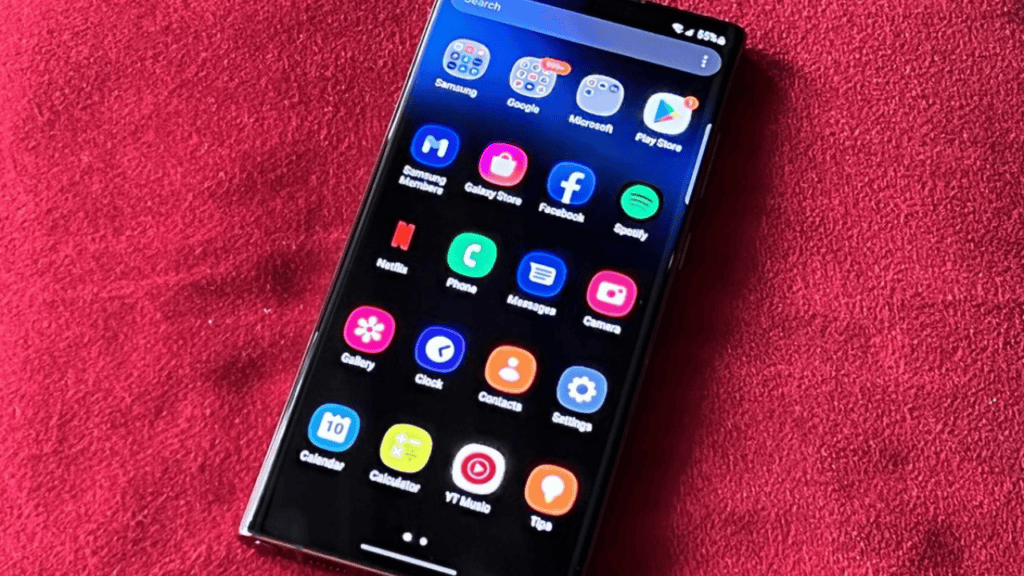 The Samsung Galaxy S22 Ultra has a massive 6.8-inch screen that is punctured in the middle for a camera. Top and bottom bezels on this panel are barely there. The phone’s sides are curved to match the aluminium body, giving it an ultra-premium appearance and concealing its actual width. The 228g weight of the Galaxy S22 Ultra is not inconsequential. However, Samsung did a great job of balancing the device such that it can be used with one hand. Although the Galaxy S22 and S21 Ultra both feature quad rear cameras, the one on the back of the Galaxy S22 Ultra is flush with the rest of the device (Review). As an alternative, the rear of the device features the protruding lenses of its cameras, creating a decidedly less streamlined overall impression. The autofocus laser is housed in a separate ring. Except for the Samsung branding, the remainder of the back panel is completely flat and unadorned. The phone’s bottom features the SIM card slot, a speaker, a USB-C port, and a dedicated slot for the S Pen. A microphone is the only component of this frame’s upper portion.

For the Galaxy S series, Samsung has traditionally used its own Exynos SoCs in India. As of this writing, the Qualcomm Snapdragon 8 Gen 1 SoC found in the Samsung Galaxy S22 Ultra is the most powerful SoC available in an Android smartphone. No more storage is available, although most people shouldn’t need more than what’s included. The 6.8-inch AMOLED screen has a quad-HD+ resolution and a maximum refresh rate of 120 frames per second. This display has a maximum brightness of 1750 nits and is HDR10+ compliant. An ultrasonic fingerprint scanner is built into the bottom half. Both the front and back of this Samsung phone are made up of scratch-resistant Corning Gorilla Glass Victus+. Bluetooth 5.2, Wi-Fi 6, Ultra-wideband (UWB), NFC, 5G, and 4G Voice over LTE (VoLTE) are just some of the wireless connectivity options on the Galaxy S22 Ultra. Two nano-SIM cards, or one physical SIM and one eSIM, can be stored in the SIM tray.

The S Pen and Samsung Galaxy S22 Ultra both have an IP68 rating, making them resistant to dust and water. The phone’s dual speakers are powerful and compatible with Dolby Atmos. The Galaxy S22 Ultra comes with a 5,000mAh battery, according to Samsung. This storage capacity matches that of the Galaxy S21 Ultra from 2017. It’s impressive that it can do this while being around the same size as its predecessor and having some of the chassis’s internal space devoted to housing the S Pen. The maximum power output for the Galaxy S22 Ultra is 45W. One USB Type-C to another Type-C cable, but no charging adapter, is included. Based on Android 12, Samsung’s One UI 4.1 comes preinstalled on the Galaxy S22 Ultra. During the review time, my device was updated to the March 2022 security patch for Android. Previously, it had been running the February 2022 patch. The Galaxy S22 series should remain current for a long time, thanks to Samsung’s commitment of four years of operating system updates and five years of security updates. The user interface is well designed and easy to use. I never wasted time fumbling around in the menus and settings trying to find what I needed. While Microsoft and Google’s apps are the only ones that come preinstalled, Samsung does offer Spotify, Facebook, and Netflix. Spam notifications were sent to Samsung devices and apps like My Galaxy and the Galaxy Store. 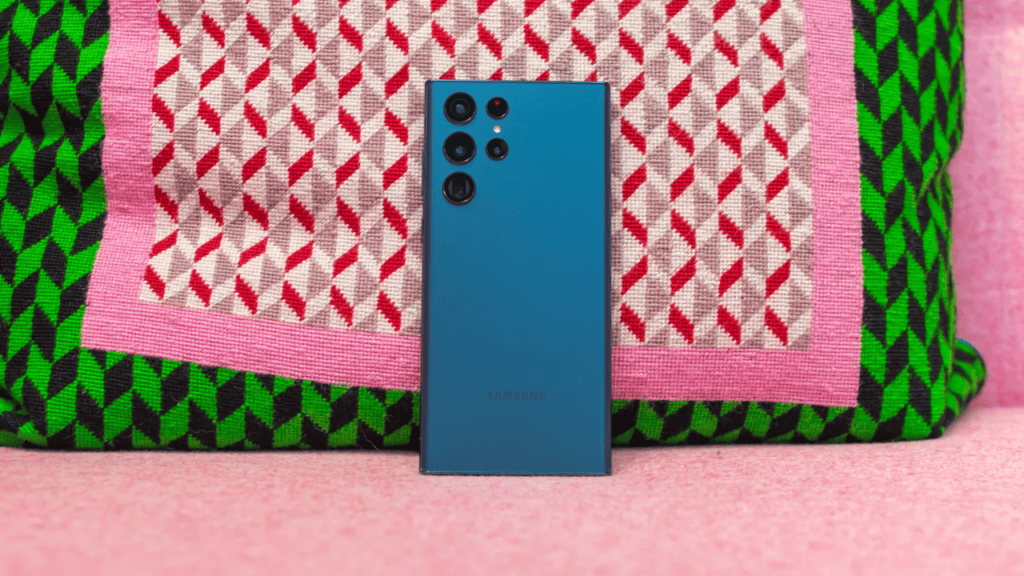 The sharp AMOLED screen on the Samsung Galaxy S22 Ultra offers wide viewing angles and vivid colours. The stereo speakers offered a new level of immersion to the video watching experience. Fast performance meant even resource-intensive games and programmes could be loaded in a flash. With 12 GB of RAM, running multiple programmes simultaneously was a breeze. Up to 8GB of space can be used as virtual memory on Samsung devices. The default storage setting on my device was 4GB. The ultrasonic fingerprint reader on my Samsung phone was incredibly reliable, rarely requiring more than a single try to unlock. Quick and reasonably accurate face recognition was also achieved.

The S Pen’s versatility extends beyond note-taking to include control of the phone’s imaging hardware. You can snap pictures, as well as change between sensors and shooting modes. Hovering the S Pen’s tip over a hyperlink will bring up a preview of the page it leads to, making it quite useful for web browsing.

I put the Samsung Galaxy S22 Ultra through a battery of artificially-generated benchmarks. With a score of 8,51,648 on AnTuTu, the phone lagged behind both the Motorola Edge 30 Pro (Review) and the iQoo 9 Pro (Review) in terms of raw performance. Geekbench 5 gave the phone a single-core score of 1,231 and a multi-core score of 3,313 overall. In graphical performance tests, the Galaxy S22 Ultra did admirably. obtaining the highest possible score in 3DMark’s Sling Shot benchmark. To be sure, it’s up there with the best of them, but it doesn’t quite measure up to the greatest in terms of performance metrics.

In-game performance was solid, and I had no trouble running Asphalt 9: Legends at the ‘High Quality’ preset and full HD+ resolution. The S22 Ultra, however, began to feel hot to the touch. I used the full-HD+ resolution and the Very High graphics settings when playing Call of Duty: Mobile. The Galaxy S22 Ultra performed admirably at these settings, but I had a 6% loss in battery life after 20 minutes of gaming, and the phone became noticeably warmer to the touch. Your phone’s upper half will get heated if you play for extended periods of time.

The Samsung Galaxy S22 Ultra’s battery life was excellent for my needs, and I seldom had to charge it more than once every day and a half. However, after using the camera or playing games, the battery level dropped more quickly than usual. To be fair, the phone lasted a respectable 16 hours and 21 minutes in our HD video loop test before going out. According to Samsung, the Galaxy S22 Ultra is capable of 45W fast charging using a dedicated charger. Since Samsung didn’t provide me with its own charger to test the claim, I used the industry-standard 68W USB-PD power supply I already owned. Although the actual charging speed of the Galaxy S22 Ultra is unknown, it was able to go from zero to 60 percent in 30 minutes and from zero to 95 percent in an hour. Not only can this phone charge wirelessly, but it can also share power with other devices over the air.

In the Galaxy S22 Ultra, Samsung has not made many changes to the camera arrangement in comparison to the S21. On the other hand, its touted low-light performance, or “Nightography,” promises improvements. The primary camera on the Galaxy S22 Ultra is 108 megapixels in resolution but saves photographs in nona-binned format by default, resulting in 12-megapixel files. The ultra-wide-angle camera on this phone boasts a 120-degree field of vision and 12 megapixels of resolution. Each of the other two cameras is equipped with a 10 megapixel sensor and either a 3x or 10x optical zoom lens fashioned in the shape of a periscope. Selfies may be taken with the phone’s 40-megapixel front shooter. Space Zoom’ 100X magnification, first seen on the Galaxy S20 Ultra, remains a feature. The Galaxy S21 Ultra has a similar improvement for framing shots at high zoom levels. When you increase the magnification past 20 times, a secondary viewfinder appears, showing a 20x zoomed-in image with crosshairs superimposed over it. The secondary viewfinder will illuminate yellow when focus is locked and the user is ready to shoot a picture. The camera app provides fixed zoom levels of 2, 4, 30, and 100 times the original image, in addition to the 3X and 10X optical zoom capabilities of the two telephoto cameras. Images were great at full optical zoom, however I noticed a drop in sharpness at 2x and 3x hybrid zoom. Even with 100x magnification, the quality of the images wasn’t great, but they were still recognisable.

The writing was on the wall when the Galaxy S21 Ultra (Review) became the first phone outside the Galaxy Note series to support a S Pen. The Galaxy S22 Ultra is the culmination of Samsung’s efforts to integrate the Galaxy Note and Galaxy S series into a single product line. It combines the excellent photography features of the Galaxy S series with the productivity attraction of the Note series. Both the hardware and software on the Galaxy S22 Ultra are top-notch, making it a flagship device. It’s safe to say that the Qualcomm Snapdragon 8 Gen 1 SoC can handle everything you throw at it. When compared to its rivals, Samsung’s cameras continue to perform at a higher level. Under heavy use, the Snapdragon 8 Gen 1 SoC may become uncomfortable to the touch. Many fans won’t bother because of the hefty price. The Galaxy S22 Ultra has a broader target audience than its predecessor did, and it faces little to no competition since no other phones offer its set of capabilities. The Galaxy S22 Ultra is currently one of the greatest Android smartphones available, and is highly recommended if you can afford it. 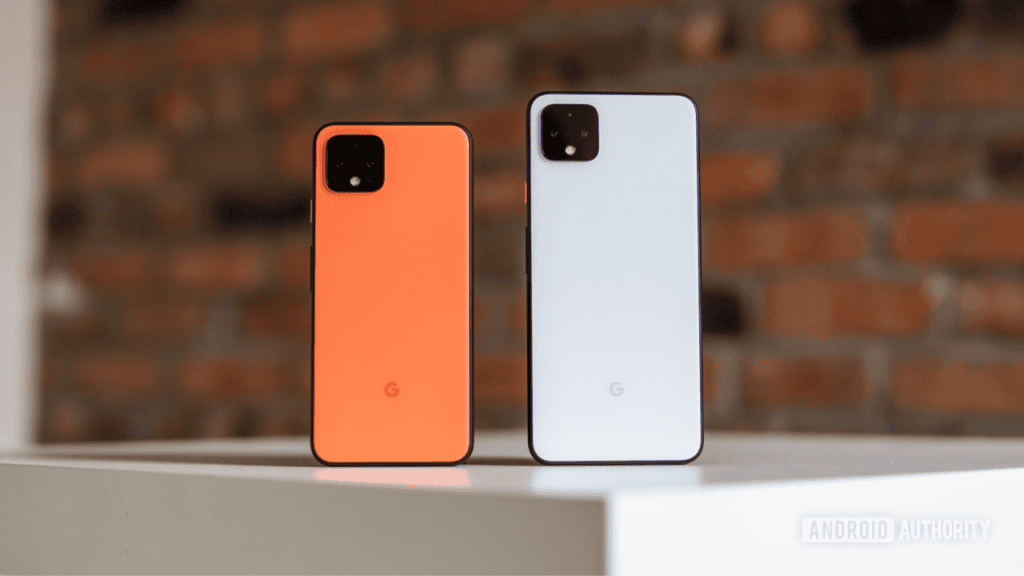 Is the Samsung S22 Ultra Too Big?

The S22 Ultra is the first smartphone in the United States with a 10X optical zoom, and its innovative stylus is a nice bonus. The top-notch Android software help. It’s possible that the Ultra is too massive. The camera’s software and functions have become too bloated and convoluted.

What’s the difference between Samsung 22 and 22 ultra?

The Galaxy S22’s 3,700mAh battery is the smallest in the family, but its 25W fast charging speed makes up for it. Both the Galaxy S22+ and the Galaxy S22 Ultra feature large batteries; the former has 4,500mAh and the latter 5,000mAh. Each phone can be charged at 45W via a cable connection, which is faster than what most other phones offer.

Who has a better camera, iPhone or Samsung?

Both the iPhone 13 Pro Max and the S22 Ultra capture excellent shots, and Samsung has improved the edge detection and bokeh of its portrait photos. Naturally, the iPhone has greater colour accuracy, and in certain cases it even has improved sharpness.

Are Android cameras better than iPhone?

In addition to the iOS post-processing software, Apple uses Sony sensors, which are the best on the market right now. This is in contrast to the inferior sensors used by Android phones. There is more than just the sensor to consider when evaluating a camera’s quality. Lens quality, camera software, and the Image Signal Processor (ISP) are all crucial.

Tips to Enhance Security in Your Online Activity