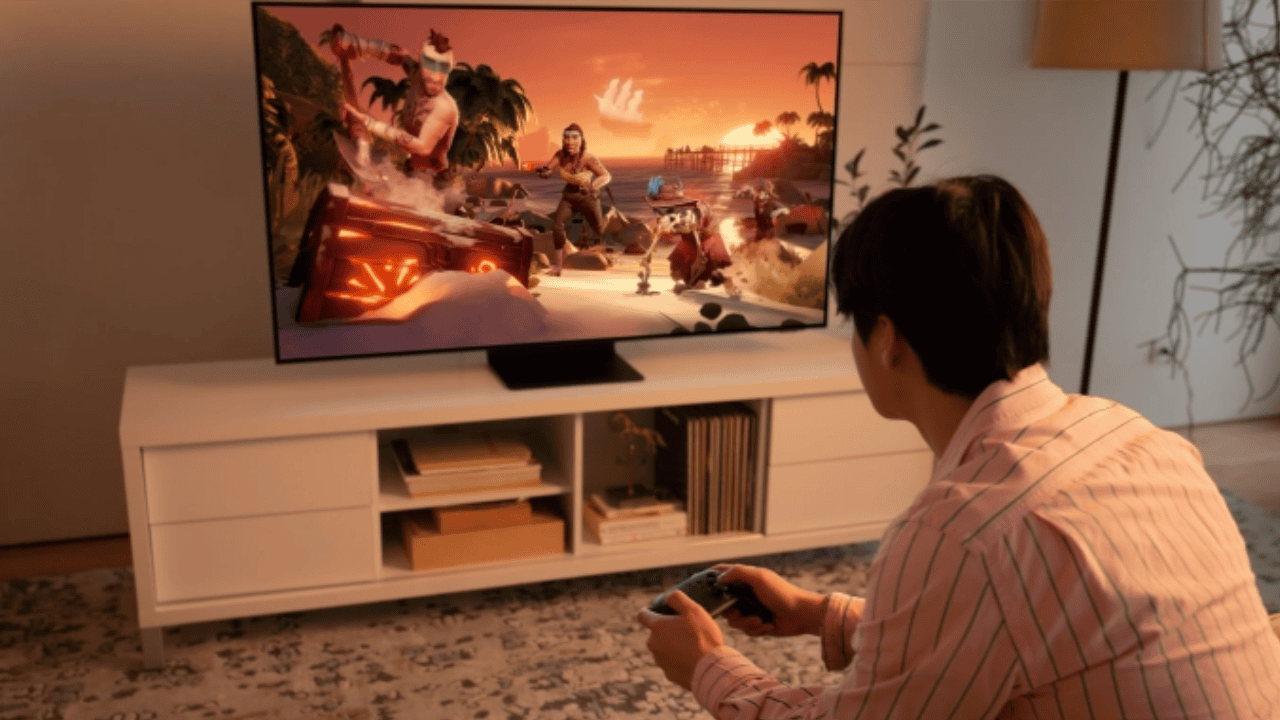 Samsung gaming tv hub, As of today, the Samsung Gaming Hub1 is available on all 2022 Samsung Smart TVs, allowing users to stream and play their favourite games without the need for any additional gear or software. An All-in-one game streaming discovery platform, Samsung Gaming Hub, was announced at CES 2022. Players may find and play games from partners such as Xbox, NVIDIA GeForce NOW and Google Stadia. In order to provide the best possible gaming experience, Samsung has created the Samsung Gaming Hub, which brings together the company’s expertise in hardware and software. 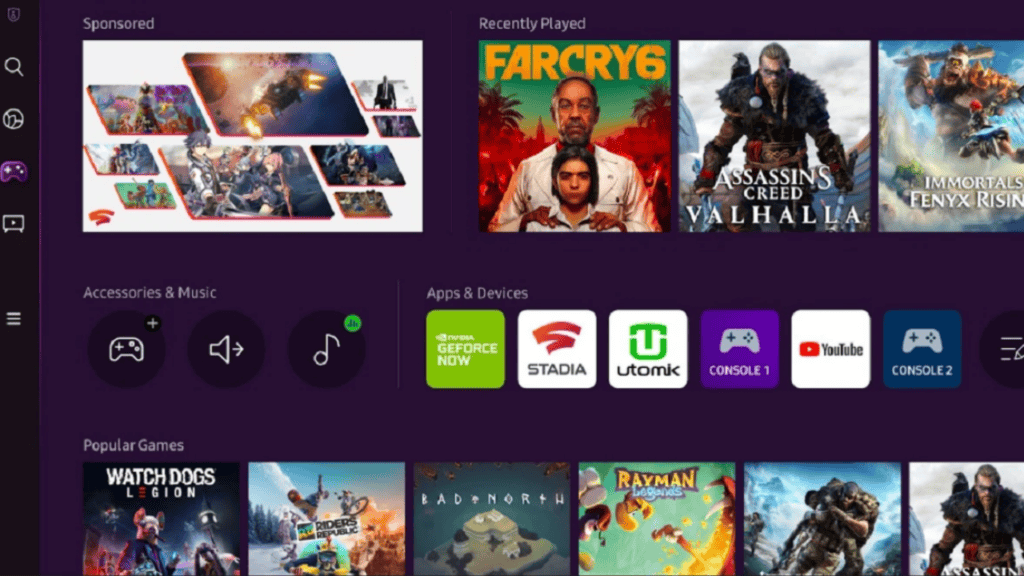 Won-Jin Lee, President and Head of the Service Business Team at Samsung Electronics, said, “The Samsung Gaming Hub combines Samsung’s leadership in streaming technology with our experience in building the industry’s most cutting-edge hardware, lowering the barriers to entry so consumers can just play.” Players will be able to simply browse and discover games from the widest selection accessible, regardless of platform, thanks to partnerships with top game streaming services and expert-curated recommendations.”

Gaming Hub is powered by Tizen, which lets gamers to access the games

They love on Xbox, NVIDIA GeForce NOW, Google Stadia as well as on their gaming consoles and PC in one convenient location all at the touch of a button.

2 The Samsung Gaming Hub allows gamers to use their favourite accessories, such as Bluetooth headsets and controllers, without having to buy new equipment, making it easier than ever to play games. In addition, based on the most recent and most popular games, users will be able to receive recommendations that have been expertly chosen.

Access to more entertainment options while gameplay is provided through the Samsung Gaming Hub’s integration of music and streaming services such as Twitch and YouTube directly on the Gaming Hub experience menu. The new Gaming Hub makes it easy for gamers to keep up with the latest in gaming news, watch tutorials, listen to their favourite music and podcasts, and check out trailers for upcoming titles.

Samsung’s 2022 Smart TV and 2022 Smart Monitor Series will feature superior motion innovations and latency-reducing technology that gamers can expect to enjoy. More than 30 percent of the input lag has been reduced in Samsung’s latest models thanks to faster decoding and improved buffer control technology. 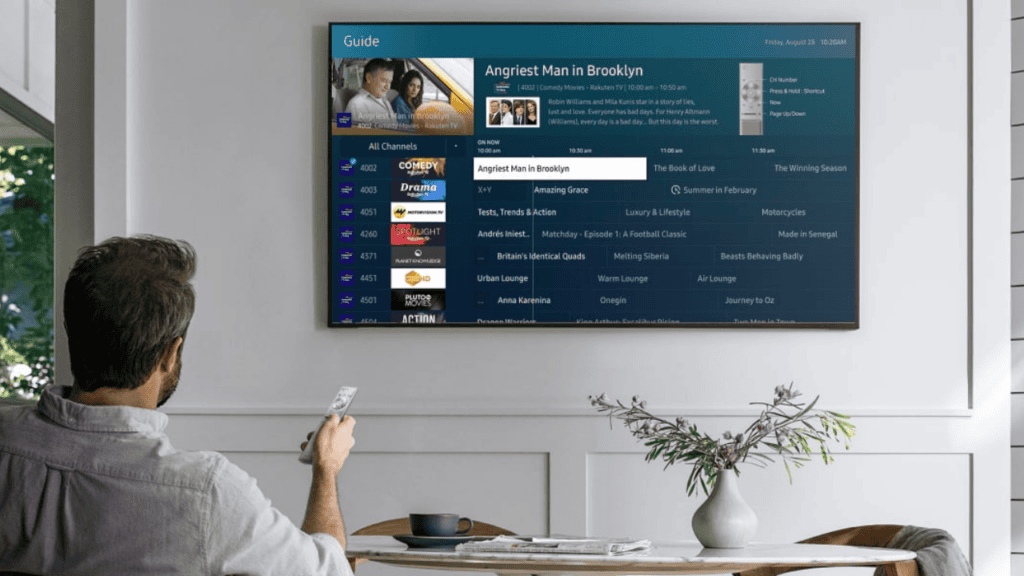 The gaming centre for Samsung gaming tv hub and monitors is being unveiled today. Nvidia’s GeForce Now, Google Stadia, Utomik, Twitch, and Microsoft’s new Xbox TV app can all be accessed from the hub’s central location. Even Amazon Luna will be accessible shortly, seamlessly integrated into the Samsung Gaming Hub’s UI.

However, the gaming centre is more than just a jumping-off place for cloud gaming. Passthrough controller inputs will allow you to utilise a single controller instead of having to couple numerous ones, and HDMI-connected video game consoles will be included in the hub. As a result, popular Bluetooth headsets and controllers will be compatible with many Samsung Gaming Hub apps, services, and devices.

Microsoft’s Xbox app is presently only available on Samsung’s Gaming Hub. But it does have access to Xbox Cloud Gaming. Which can be accessed from any TV with an internet connection. If you want to play more than 100 games on Xbox Game Pass, you’ll need an Xbox Game Pass Ultimate membership.

Nvidia is launching its GeForce Now service at the same time as the gaming centre. Alaloth: Champions of the Four Kingdoms, Disgaea 6 Complete, Card Shark, KartKraft, Hotline Miami, and NASCAR 21: Ignition can all be found right now on the App Store and Google Play Store. 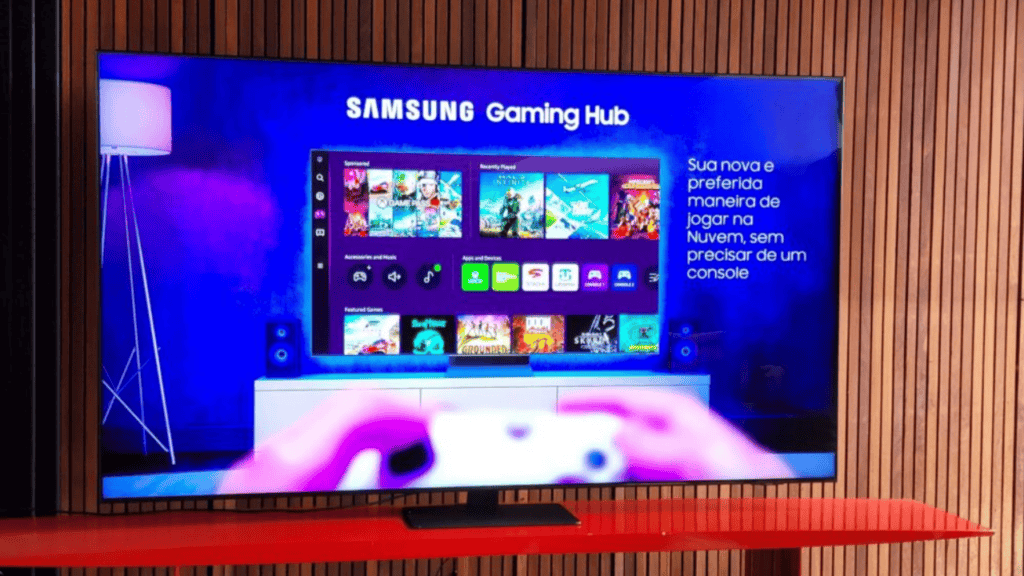 Q1: Can you play games on Samsung Tv?

As the first smart TV maker to adopt cloud gaming. Samsung gaming tv hub is rolling out its Gaming Hub to select 2022 models. Xbox Cloud Gaming, Google Stadia, and NVIDIA GeForce. Now are just a few of the services that can be accessed through the Gaming Hub. Twitch integration is even possible!

The Samsung QN90A QLED is the greatest gaming TV we’ve tested for a bright room. As an LED TV, it’s one of the best out there for picture quality and gaming features.

Q3: Is Samsung QLED capable of running at 120Hz?

Q4: How big of a screen do I need for the PlayStation 5?

In addition to 4K resolutions, HDR (High Dynamic Range), and variable refresh rates. PS5 is expected to enable 8K resolutions in the future. Playing video games will be more enjoyable if you buy a TV that has these capabilities available. However, there’s no need to fear, as the greatest PS5 TVs aren’t prohibitively expensive.

Q5: Which is better for gaming, QLED or OLED?

There is no need for a backlight because. OLEDs have the ability to switch off the pixels that aren’t being used. That means superior black depths and colours overall, but QLEDs are frequently a little brighter than OLEDs. OLED screens are unmatched in terms of input lag, reaction time, and viewing brightness.

Only a 4K TV with HDMI 2.1 and 120Hz support can ensure support for PS5 games running at 120 frames per second. Therefore that’s the only way to go.