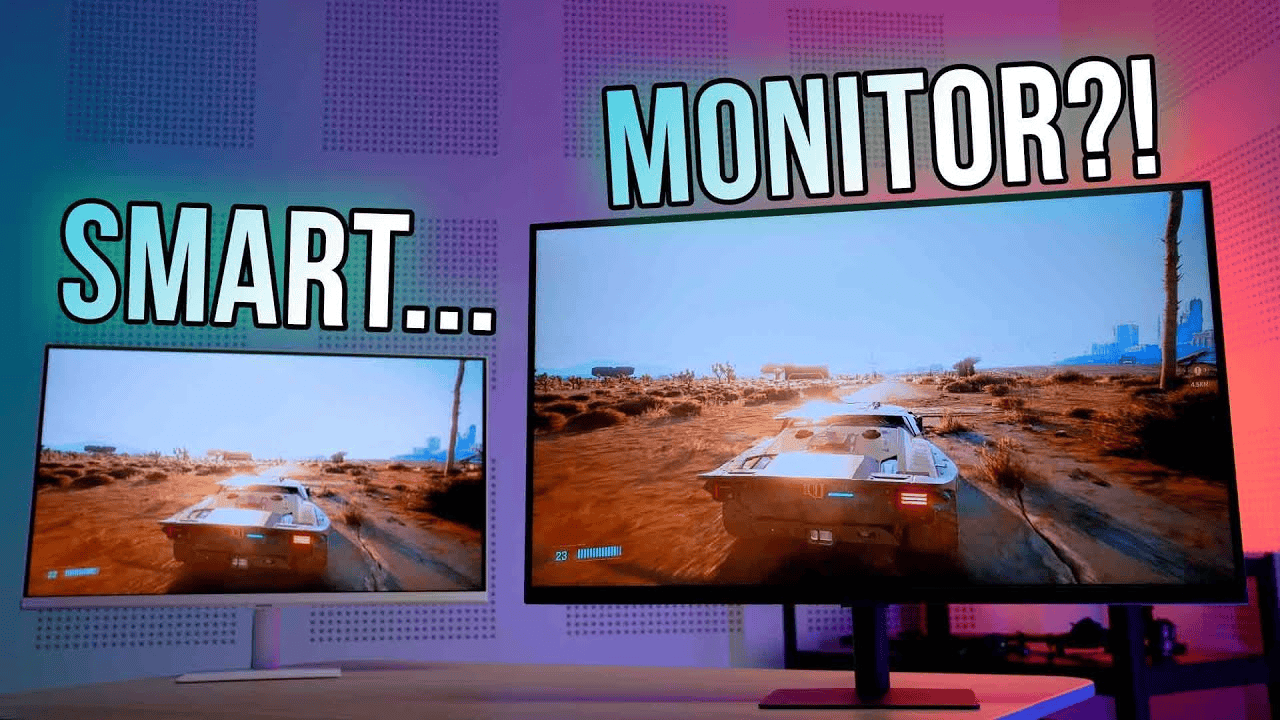 Samsung m7 review, Replacement for the Samsung 43M70A, the Samsung Smart Monitor M7 S43BM70 is a 4k smart monitor. It’s not like a regular monitor because it has a smart interface built right in and a tonne of streaming apps integrated right into it. Thus, it is effectively a 43-inch TV devoid of a tuner but with characteristics more commonly associated with monitors, such as ergonomic adjustments to the stand. You can use the accompanying remote’s microphone to command the Bixby or Alexa voice assistants, or you can use the display’s microphone to do it hands-free. The Samsung Smart Monitor M8 S32BM80 is a 32-inch edition of Samsung’s Smart Monitor with a different set of connections and a reduced screen size. 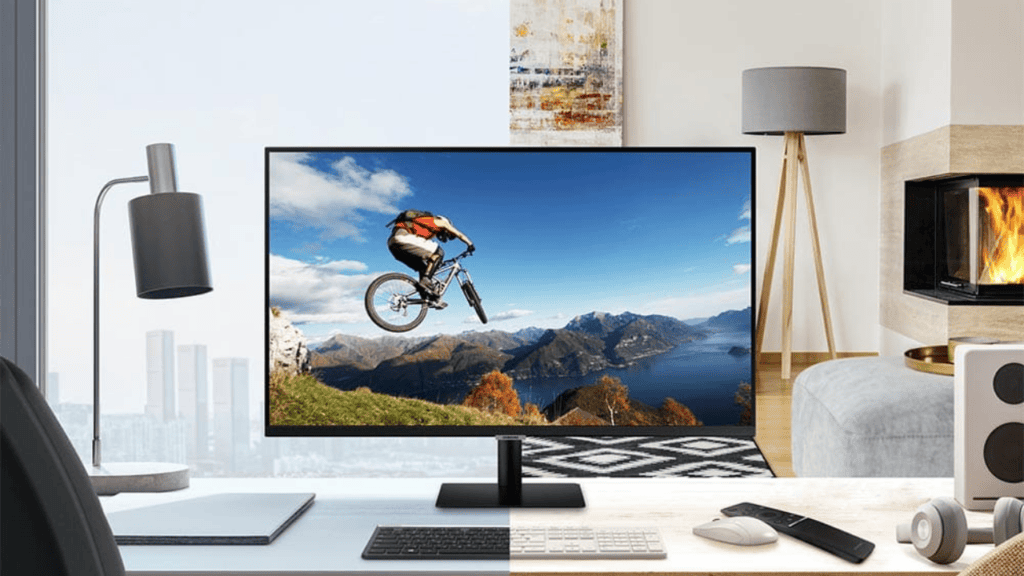 The Samsung M7 is an excellent media player. With the wide variety of streaming apps available on the Tizen OS smart interface, you may enjoy your media collection without even needing a PC. It appears amazing in low light conditions because to its high contrast and uniform blacks. It offers good peak brightness, but the glossy screen coating makes it unsuitable for use in bright rooms.

With the Tizen smart platform pre-installed.

Screen size and native resolution are quite high.

When viewed at an angle, the image quality decreases.

There is no in-room dimming option.

Ultra-HD monitors are plentiful near the 32-inch mark, but Ultra-HD 32-inch TVs are exceedingly rare. This is understandable given the importance of clarity and accuracy on a monitor, which you will likely be seeing from considerably closer than a television. Although the Samsung 32-inch M7 monitor was designed primarily for use with a computer, it is also capable of performing well as a television due to its many features and characteristics.

Ultra-HD (3840×2160) Vertical Alignment (VA) LED-backlit LCD display. The screen can refresh at up to 60 hertz, has a response time of 8 milliseconds, and can display high dynamic range material in formats up to and including HDR10. The monitor’s specs aren’t ideal for high-end gaming, but they’re fine for general work use or as a secondary display to complement a smaller laptop screen. The resolution and HDR compatibility also make it a decent choice for watching TV on occasion.

The Samsung 32-inch M7 monitor is minimalist and understated, drawing attention only to the screen itself. It is ultra-slim with minimal ports and inputs and ultra-thin bezels on all sides and a tiny Samsung branding on the bottom. The Samsung M7 display has Bluetooth 4.2 and Wi-Fi 5 for connectivity. There are two HDMI 2.0 inputs (with ARC capabilities on one), a USB 2.0 hub with two Type-A ports (plus another for service purposes), a USB Type-C port, and a power outlet for the accompanying power cord. Because it can supply up to 65W of power, data, and an image display signal, USB Type-C connectivity is particularly intriguing and flexible in this case. With the proper cord, you may plug your laptop or mobile device into the monitor and use it as a power source. You may charge your devices or stream media from a USB drive directly to your TV using the USB Type-A connectors. 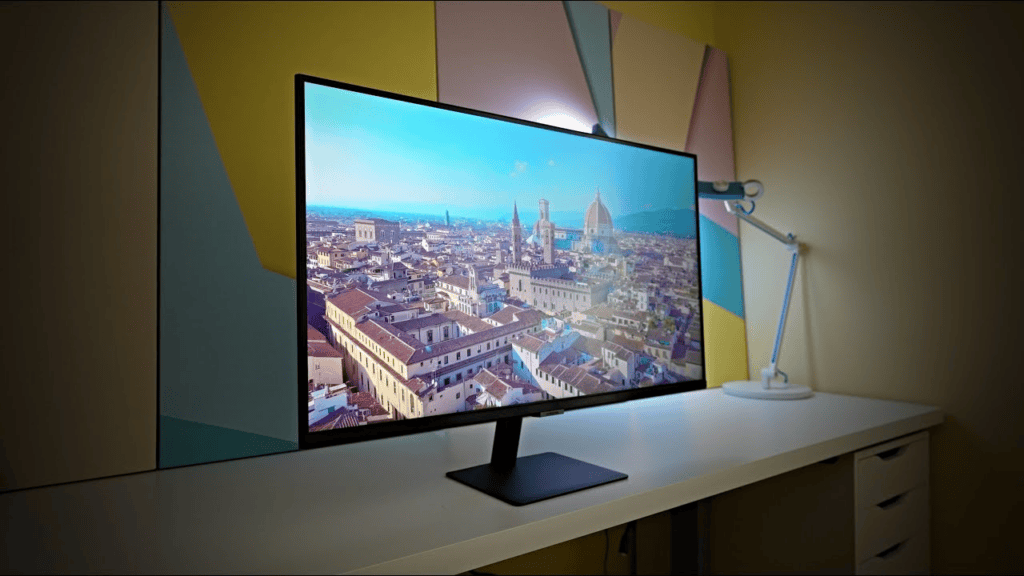 The Samsung M7 monitor comes with a stand that can be adjusted to raise the screen by about 10 centimetres, which is conveniently located in the middle of the package. The stand holds the monitor securely, however I did notice some movement when my ceiling fan kicked on. Though I didn’t find it distracting, some may find the continual, subtle motions annoying. While a wall-mount kit isn’t included with the monitor, you can mount it to the wall if that’s your preference.

With its stand, the Samsung M7 smart monitor has a combined weight of 6.5 kg. The box has everything you need to get started: a controller, a 1.5m power cable, and an HDMI cable. The Samsung M7 display contains built-in speakers for usage as a TV, albeit the output isn’t specified and no standard audio formats are supported in the user interface.

The Samsung 32-inch Ultra-HD Smart Monitor M7 is a’smart’ screen, as its name suggests, with its own software interface and access to apps. The display is powered by Samsung’s Tizen operating system, which provides access to a wide variety of apps and games, including major streaming services like Netflix, Amazon Prime Video, Disney+ Hotstar, Apple TV, and a number of others specialising in Indian language content. The monitor is also a capable smart TV when not being used as a computer screen.

Streaming media and content via a computer is also an option, but the smart connectivity provides additional benefits, such as the ability to enjoy it from the comfort of your couch after a long day.

Important mobile connectivity choices include Apple AirPlay 2 and Samsung Wireless DeX for use with Samsung’s smartphones and tablets, as well as Office 365 apps with a paid subscription. You can accomplish all your work on the Samsung M7 monitor without ever connecting a PC to it if you only use Office programmes, cloud storage, and a web browser. However, such applications would be uncommon and specific, given you probably already have a computer handy. 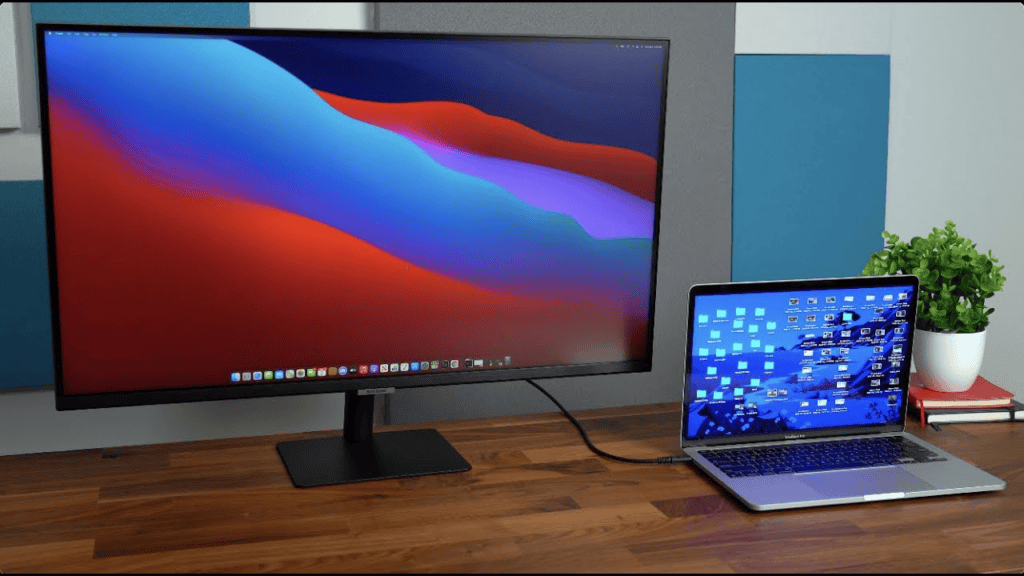 To put it simply, the M7’s intelligence is the product’s selling feature. The operating system is adequate for TV use, and it is compatible with all the major streaming services.

Q2: Is the Samsung Smart Monitor M7 a decent choice?

Verdict. There is no one area in which the Smart Monitor M7 shines. However, it deserves a spot as one of the finest choices for people living and working from home in tiny or shared accomodation by giving great performance across the board, with the extra benefits of Samsung’s smart TV capability.

Q3: What’s the distinction between the Samsung M7 and M5?

The 4K resolution and superb brightness of the M7 display make for clear and detailed visuals. HDR 10 support is a fantastic bonus, especially for video games and built-in streaming apps like Netflix and Apple TV.

Q5: What is the greatest Samsung smart monitor?

To date, our testing has led us to conclude that the Samsung G7 LC32G75T is the company’s top gaming display. It comes in two screen sizes, 27 and 32 inches, and we anticipate high quality performance regardless of whatever size you choose.

How Technology Is Changing the Way We Work