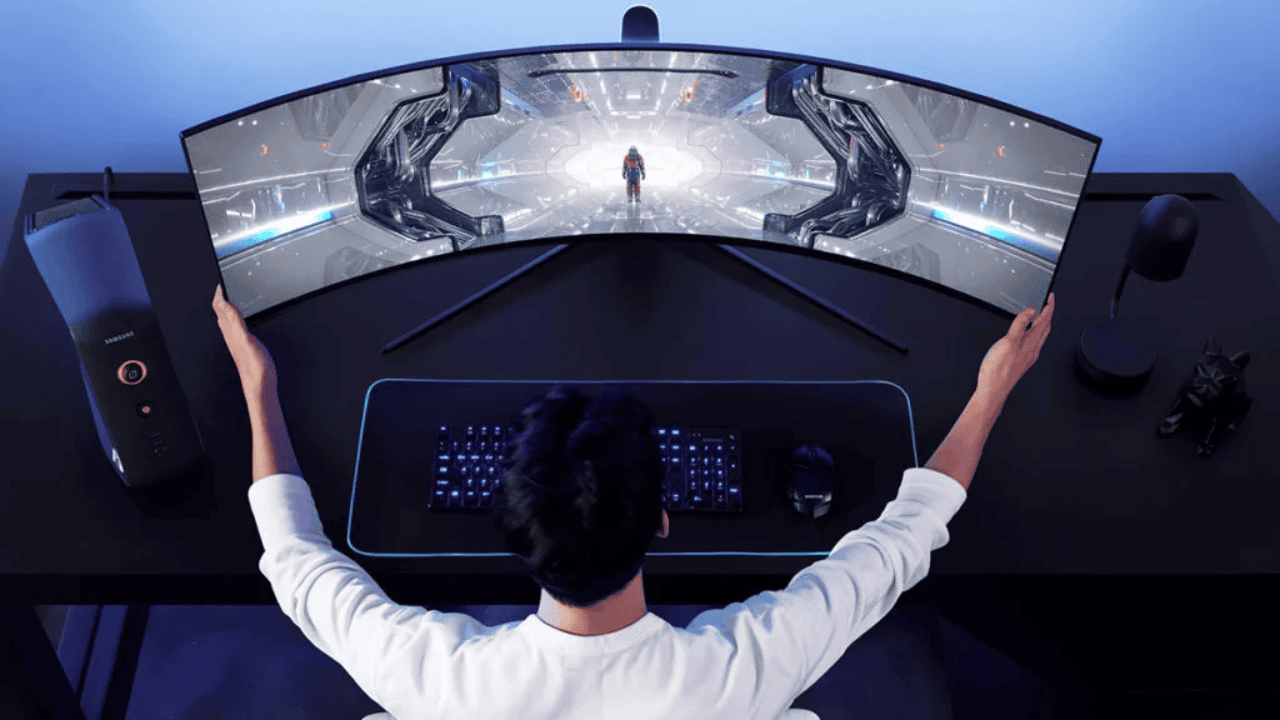 Samsung monitor odyssey g9 32:9 240 Hz Curved HDR G-SYNC VA Gaming Monitor has a wide 32:9 aspect ratio on a 49″ diagonal, which is the same as having two side-by-side 16:9 QHD displays and is ideal for game development, finance, web development, and more. While the 240 Hz frame rate helps to maintain smooth action without artefacts, the Quantum Dot technology, HDR compatibility with 1000 nits of brightness, and broad gamut support are responsible for the realistic colour and contrast seen on the screen.

The 49-inch, ultra-wide, Dual QHD 5120 x 1440 display allows for effortless multitasking without the need for bulky secondary monitors, all while displaying vivid, high-definition visuals. There is less strain on the eyes because of the more consistent distance from the screen to the eye with a radius of 1000mm. The 2500:1 contrast ratio of the Samsung VA screen allows for whiter whites and darker blacks.

Assistance with Color Space and Range

The Odyssey G9’s 1.07 billion colour depth, QLED technology, and support for up to 125% of the sRGB and 95% of the DCI colour spaces allow for more accurate reds and greens. Additionally, each screen has been calibrated at the manufacturer to provide the highest level of image accuracy and realism.

Let people hook up two devices to a screen and watch them both at the same time. Put your code in one window and the output in another. The included programme, Easy Setting Box, makes adjusting the windows a breeze.

In combination with G-Sync, a rapid 240 Hz refresh rate and reaction time get rid of blurring, ghosting, and juddering in fast-paced media like video games and movies. 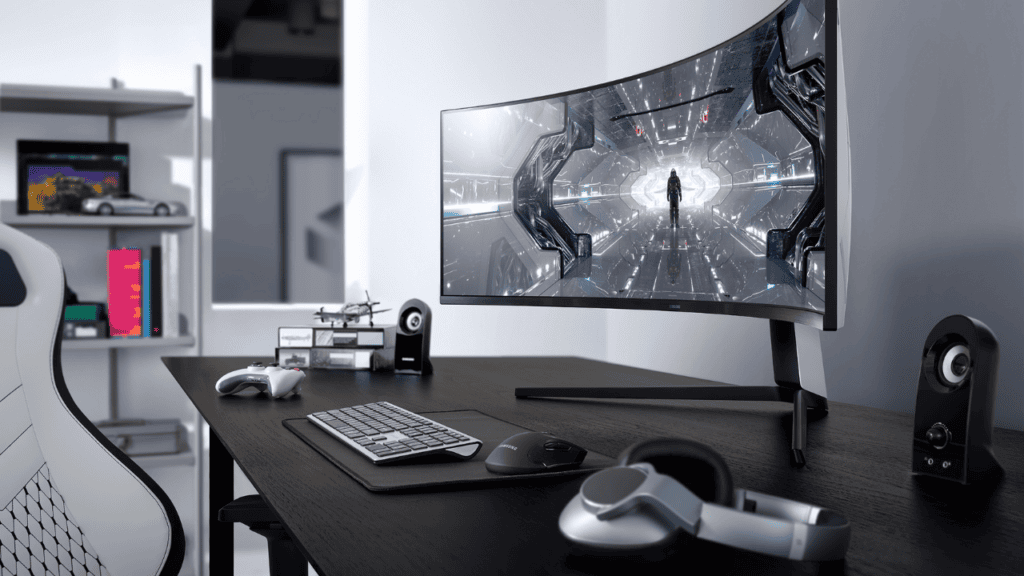 The Odyssey G9 is a jaw-dropper, and I don’t mean that in a figurative sense; in January, its remarkable curvature and sci-fi-inspired frame wowed guests at the world’s largest technology exhibition.

However, when I set up the identical monitor on my lowly IKEA sit-stand desk, the difference is startling. This G9, in comparison to my previous mishmash of screens and tangle of wires, appears like a terminal on a Star Trek spaceship, albeit with some of the magic taken away by my actual keyboard and its lengthy braided cord.

The Odyssey G9’s large footprint and sturdy frame make it difficult to position it in a variety of settings. I’ve been quite fortunate in that my tiny form factor When the screen is at its tallest position on the stand, my Audioengine A2+ speakers just barely fit underneath it, with a clearance of a little over six inches. This allows me to use a Ncase M1 behind the screen. However, if I’d had a more powerful computer or louder speakers, I might have needed a more spacious desk, or else I would have had to utilise the 100mm x 100mm VESA adaptor included to hang the nearly four-foot wide, one-foot deep, 31-pound screen on the wall. A TV arm can support significantly more weight than my present monitor arms can handle.

So far, I’ve been pleased with how this monitor complements my workstation setup. I can simply switch between my PC, my game console, and a second computer, all of which are being displayed on separate 27-inch, 2560 x 1440 monitors, thanks to the two DisplayPorts and the HDMI 2.0 port.

The 3.5mm audio output and two USB-A 3.0 ports were compatible with my keyboard’s built-in USB and audio ports. You can see from the pictures that I have taken that I am able to accomplish a lot by using just one cable that is exposed. While the V-shaped stand may look a little skimpy for a monitor of this size, it actually takes quite a bit of force to tip the screen even when it is set to its greatest height.

Samsung’s Odyssey G9 wasn’t put through its paces on a gaming console or PC in my first major test; rather, I co-hosted The Verge’s world-famous Apple event live blog last month, where I took every screenshot you saw. To keep up with my constant task switching, I usually have three displays going at once. I have yet to encounter a better multitasking challenge than an Apple event.

A part of me wasn’t sure if this magnificent screen would even load. Since very few programmes or websites are optimised for display on a 32:9 screen, you’ll have to become used to working within a grid of windows. I couldn’t do what I typically do and just throw a few of apps into each screen. Microsoft’s free downloadable FancyZones windowing manager was a godsend despite the fact that Samsung doesn’t include any excellent windowing software with the Samsung monitor odyssey g9 and Windows 10’s default Snap is horribly poor.

The Apple live stream, The Verge’s live-blogging tool, Slack, a browser window to keep track of any Apple press releases that might pop up during the show, and even a narrow strip of Windows Explorer so I could see which images I’d already captured and weed them out as needed were all given their own dedicated snappable spots. The only snag was installing an extra Chrome extension to confine YouTube’s “full screen” mode to the browser window rather than the entire ultrawide display.

I wouldn’t say it’s better than having three displays for work, but it does seem like a sufficient substitute, with the possible exception of the fact that toast notifications now appear in the corner of my eye, where they are easy to miss. Still, it’s good to have a solution that doesn’t need me to constantly tweak the way my mouse moves from one monitor to another, or to worry about ensuring that the colours and contrast are consistent across all three panels. The fact that no matter which direction I spin in my chair, the same constant distance of land remains between my eyes is a tremendous joy. While the Samsung monitor odyssey g9 unparalleled curve may attract some outside light, the device’s matte display effectively muffles reflections.

Despite my high hopes, the ultrawide aspect ratio fell short when applied to moving images. The ratio of 32:9 looks like it would be perfect for movies, but I had a hard time actually finding anything that wasn’t 16:9 that would play in ultra high definition. You’ll need 4K to make the most of a screen this high-res and this close to your face, but most streaming platforms won’t make it easy for you to access their 4K and HDR content on a Windows machine in the first place (YouTube being the primary exception; Netflix works if you have a recent Intel processor and use Microsoft Edge or the native app). I noticed a noticeable improvement in clarity from 1080p to 4K when watching YouTube videos; for example, the pixels in Dieter’s review of the iPhone 12 were easy to make out. While regular 16:9, 1080p material does render properly in full screen mode with black borders on the sides, I feel like I’m wasting a lot of screen real estate. Also, even with high dynamic range (HDR) and Samsung’s questionable local dimming activated, the blacks seem a tad grey, not the deep inky black you’d get with an OLED panel. 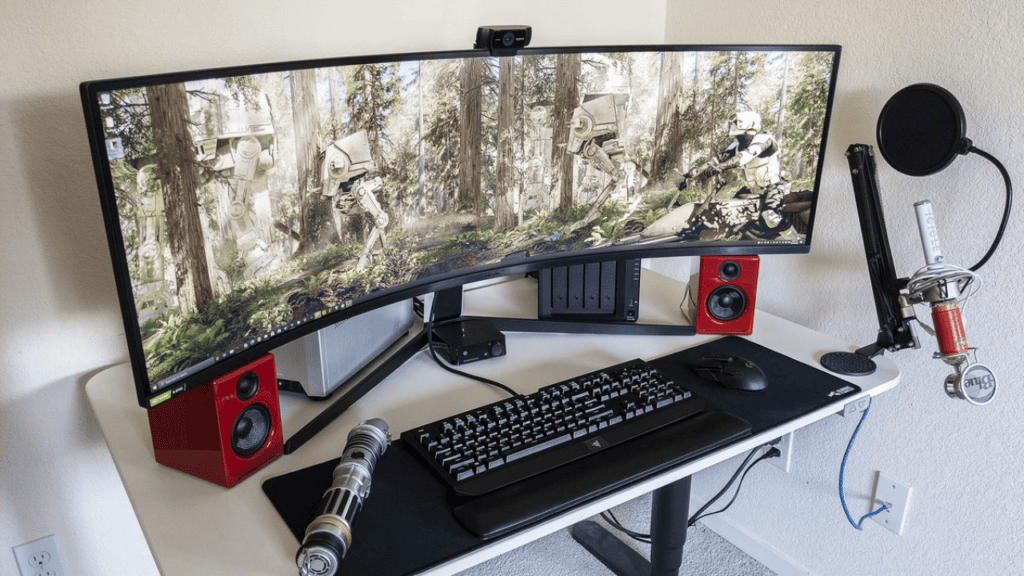 As a first step, you should realise that the Odyssey G9 requires a powerful graphics card. The 5120×1440 resolution isn’t quite as many pixels as the 4K UHD screen’s 3840×2160 display, but keep in mind that we’re talking about a monitor with a refresh rate of up to 240 hertz. Since my GTX 1080 couldn’t even handle Death Stranding or Destiny 2 at 60 frames per second smoothly at that resolution, I had to borrow an Nvidia GeForce RTX 3080 in order to give a fair review of the Odyssey G9.

The second caveat to playing games on an Odyssey G9 is that it might not be as immersive as you’d hope. Don’t get me wrong, being immersed in an X-Wing cockpit that wraps around you is an awesome experience, Samsung monitor odyssey g9 and being able to use my peripheral vision in competitive shooters like PUBG and CS:GO seems like a real edge. Still, it wasn’t long before I realised something was off. Samsung monitor odyssey g9, I played a tonne of different games on the Odyssey G9, sifting through my Steam, Epic, and Uplay libraries and trying different settings, and the simple truth is that all 3D games look distorted when seen in a 32:9 aspect ratio. Changing your game’s field of vision won’t remove the effect; instead, it will alter the proportion of the game world displayed in the middle of the screen (where things seem normally) against the edges of the screen Samsung monitor odyssey g9 (where they look stretched and zoomed). I took a measuring tape and confirmed that the content of a video game that is 4.75 inches in the middle of the screen may be expanded to a full 12 inches on the sides.

This isn’t Samsung’s fault, but rather a consequence of how games are designed. However, despite Nvidia’s proposal to change this (see the linked article above), the company’s Simultaneous Multi-Projection does not appear to have made it into any of the titles I tested. Also, the aspect ratio of pre-rendered sequences in games like Final Fantasy XV will be preserved for you.

But there are three things I’d like you to think about before immediately dismissing 32:9 ultrawides: 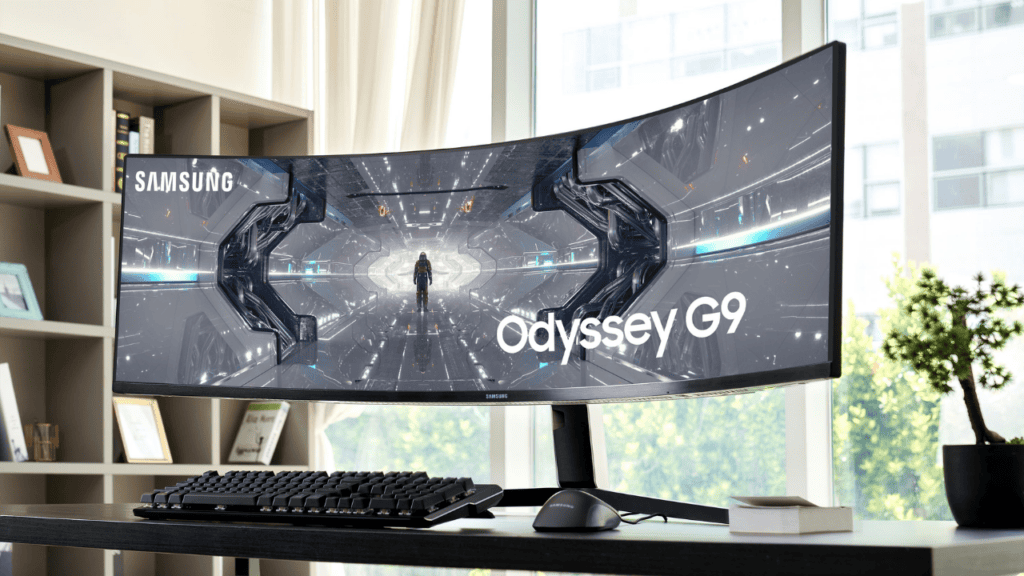 The screen’s 109ppi, 5120×1440 resolution, and 240Hz refresh rate aren’t quite 4K, but they do demand a powerful gaming rig to reach their full potential.

In a professional setting, the Samsung Odyssey Neo G9 shines. Thanks to its spacious 49-inch display and high-definition (5120×1440) resolution, you may easily have numerous windows open at once.

Does the Samsung Odyssey have a resolution of 1440p?

For professional use, Samsung’s Odyssey G7 is an excellent choice. The 32-inch screen and 1440p resolution are great for working with multiple windows at once.

Is the Odyssey G9 a good investment?

The Samsung Oddysey G9 is a worthy investment if you fit one of the following categories and are in the market for a high-end, statement monitor: The combination of the 1000R curve and the sheer size of the map should satisfy your craving for immersion if you are a serious gamer.