Smartwatches are actively gaining popularity among common gadget users. The only limitation that we come across while using the wearable is its small screen. The limited screen size hinders the use of the device to its fullest, but it can’t really be made bigger or there won’t be any point of its existence. Thankfully, Samsung is working on a cool new concept to get over the limited screen size issue in smartwatches.

A recently dicovered patent by the company reveals a smartwatch concept with an inbuilt projector, which projects an extended screen on user’s palm. The patent filing by Samsung states that the projector would be clubbed with camera and sensors. The sensors would help in detecting the position of wherever a user taps and the camera would assist in projecting the smartwatch UI. Not just that, the wearable would identify the shape of the user’s hand, which would help in the proper projection of the UI regardless of the uneven surface of the palm. It is noteworthy to point out that the patent was filed in the year 2014, but has been discovered recently. 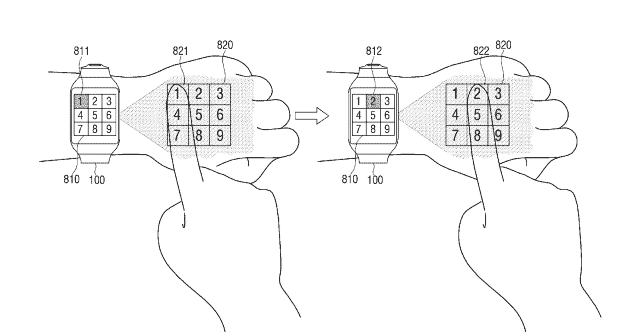 As we can see in the prototype images, the concept would use wearer’s hand as a projection base. The additional space of the palm would be covered by extra app features such as dial pad and menu options. Even knuckles will be used as the projection base for extra app elements. We believe that this concept could be of good use as it would optimize the use of smartwatches. It would also be pretty interactive for the users and definitely easier than struggling with a small screen. It would also elevate the purpose of smartwatches from an extension of smartphones to much more. 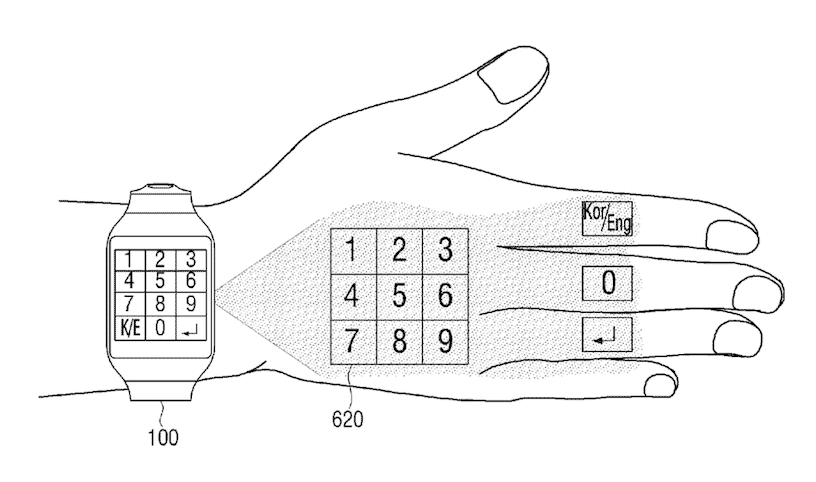 Having said that, at the end of the day patents are just patents and there is no confirmation whether Samsung would actually come up with such technology. There are chances that the company starts working on the design and comes up with a breakthrough smartwatch or it may just keep the patent under its filing and never actually works on the idea. These patents are just copyrights so that no one else (especially rivals) takes up the idea. However, we earnestly hope that Samsung comes with such wearable design soon.