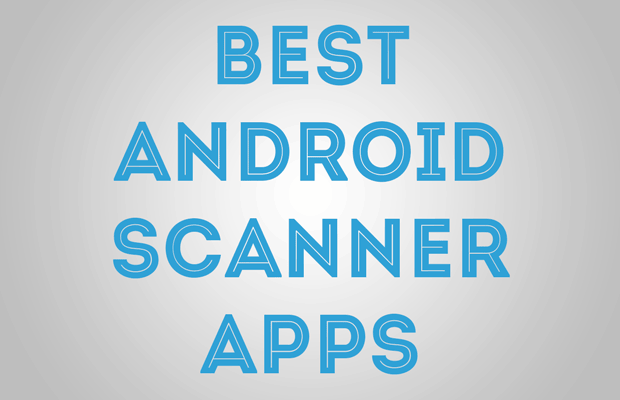 I often find myself in the situation where I need to scan an important document, but I have no scanner available at the time. The only thing that can help me in these cases is my beloved Android phone.

There are tons of scanning apps out there. Most of them are free, but with in-app purchases for “premium features”. However, the functionality is most of the time quite similar – you take a picture of your document, the app allows you to crop it, it increases the contrast to enhance readability and then it saves the file somewhere on your phone for future reference.

Let’s look at how some of the top android scanner apps compare to each other. For this I will run a test with a single document. FYI, the room where the scans will be taken is lit comfortably bright, with mostly warm LED lighting. I will be mainly looking at the final results of the test and top-level features, rather than going into details on user experience and performance of the individual scanner apps. So, here are the results:

Today Microsoft has released its own mobile scanning app Office Lens to Android and iPhone users, “just” one year after its release for Windows Phone. And, of course, we had to test it.

Office Lens for Android is probably one of the most minimalist scanner app out there. Once you launch the app, it will immediately go into camera mode. Just like with the apps below, Office Lens will automatically recognize the edges of the piece of paper you want to scan and adjust the perspective after you took the picture with your device.

To my surprise, even at a very inconvenient angle, Office Lens did a pretty good job at adjusting the perspective to make the final result look as if you have taken the snapshot from right above the paper. 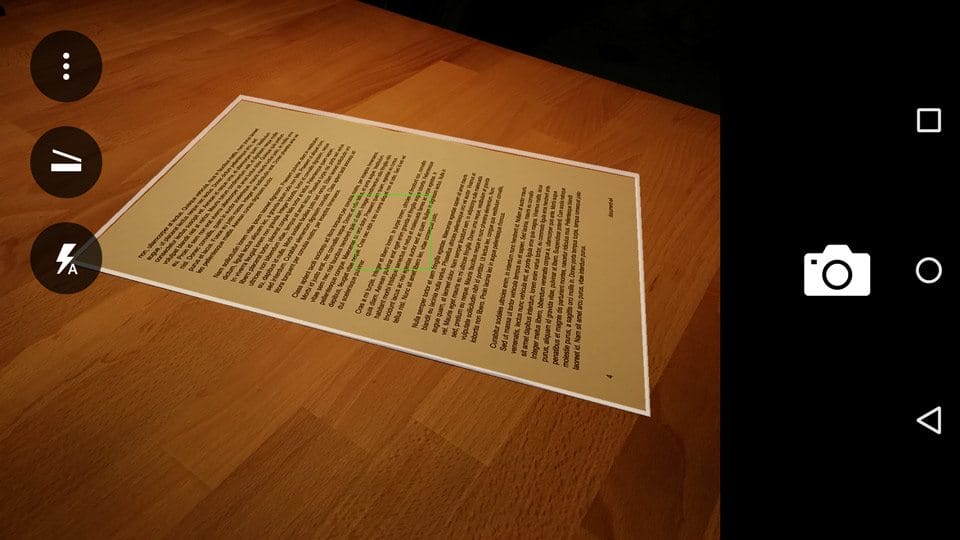 In terms of readability the end result was quite alright. However, for some reason, Office Lens has troubles with color correction. Both tests resulted in overly blue- or red-tinted scans. For me this is not too big of an issue, since converting both to black & white right from the photo editor on my Nexus 5 made did trick. But hey, this feature should be built-in! Microsoft, get your stuff together!

Of course, you can save the scans as images straight to your phone’s storage, or share them via Android’s native sharing options.

If you are an Android user, you will first need to jump through some hoops do download the app. To do that, go to the official Office Lens Google+ community, join it and select “Become a tester” in the About section. iPhone users, you can download it straight from the App Store.

My Scans (discontinued, APK below)

My Scans is (*UPDATE: “was”) a “freemium” app that gives you basic functions for free, with an option to upgrade to the Pro version for additional functionality.

Once you open the app, it will prompt you to add a document to your library. Tapping on the “plus” icon in the upper-left corner of the screen will allow you to create a document from your camera by scanning it. This option will fire up the app’s camera function right away, and now you can snap a picture of the piece of paper you want to scan.

My Scans automatically recognizes the edges of the document and creates an outline of the sheet of paper. This means, that it doesn’t matter at what angle you take the picture, the app will adjust the perspective itself and give you a result, which would look like you have taken the picture at a perfect vertical angle.

The final result, however, doesn’t look that great. You will be able to read the text, but the resolution is far away from perfect. It’s certainly not a camera-focus issue.

To share the scanned document with other people you will need to upgrade to the Pro version for €3.99 ($4.99) or watch a video ad right from the app.

Since the app has been pulled from the Play Store, the only way to get it onto your device is by downloading the APK file.

The first thing you will see after downloading and opening CamScanner is the fact that it’s a very beautiful app, programmed with the end-user in mind. The experience is very similar to any other PDF scanner app for Android. On the bottom of your screen you will see a single camera button, which, obviously, will open the camera function within the app.

Where MyScan adds a nice outlining feature to the document, the CamScanner camera feature looks like a normal camera app would look like. No outlines and no extra AR whatsoever (not that this matters, we are only looking for the result).

After snapping the picture of the paper you want to scan, the app will recognize the corners of the sheet and outline it in order to crop it in a way that would result in a what’s look like a perfect perspective, just like the app before.

Similar apps, quite different results. With unchanged lighting, position of the document or change of device, the result is very different from the one before. The text is crisp and clearly readable. A document like this is safe to share with other people, whether it’s private or professional.

However, the final result is, obviously, still far away from desktop-scanner quality.

Sharing the document is very easy. CamScanner gives you the following exporting options:

As mentioned above, all scanner apps have extremely similar functionality. And Tiny Scan is not an exception. Just like in the previous apps, the home screen of the app has a camera button, which will fire app the camera to scan the document you need.

Again, TinyScan will recognize the corners of the document to adjust the perspective. You can manually reposition the corners in case the app gets it wrong, but in my experience it does it pretty well, as long as you have a different-colored background behind the document you are scanning.

The end result is certainly passable: the text is clearly readable, but slightly more grainy than expected. Quality-wise, TinyScan falls somewhere between My Scans on the low end and CamScanner on the high end.

With Tiny Scan you can share the scanned PDF file via email or by saving it to your Android picture gallery, where you can access and share it any way you want. You can also choose between Small, Medium and Large file sizes to share or save.

The Pro version of the app integrates with Dropbox, Evernote, Box, OneDrive and Google Drive (which has a scanning feature of it’s own).

Reddit user AggieDev recently reached out to the /r/Android community to show everyone his new Android scanner app SimplyScan. According to the developer, most scanner apps have all the basic functionality, but as soon as you need more than just the basics you’d need to pay an extra $4.99 for most Pro versions. Usually, those expensive in-app purchases unlock features such as adding multiple pages to a PDF document, removing watermarks from scanned PDFs etc. SimplyScan’s mission is to make those features accessible at a much lower price, giving you all the scanning features you would for a price you can afford, packaged in a sleek app with our favorite Material Design look. 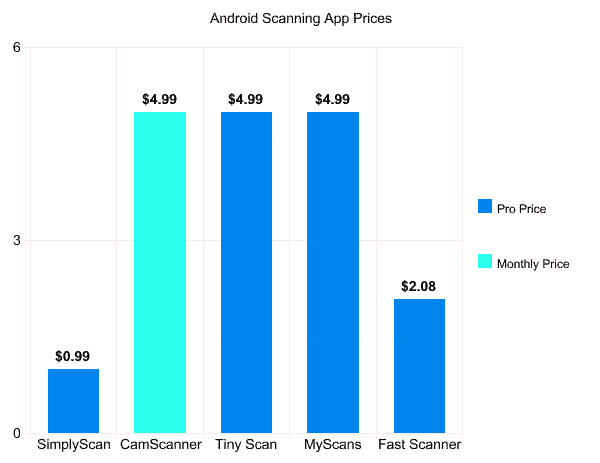 Before jumping to any conclusions from you will read below, please remember that this is a new app that deserves a fair shot. The developer is actively listening to the users and will certainly continue to improve the app. With that being said, here are my thoughts on SimplyScan:

SimplyScan is a brand new Android scanner app that has potential to reach the top and beat best-selling apps like CamScanner and Tiny Scan. The simplistic look (following all standards of Google’s Material Design) and guided instructions makes using it for the very first time very easy. The end-result is also comparable to the above mentioned apps. However, the flow and actual process result have room for improvement.

Take a look at some screenshots from SimplyScan:

A while back, Matt pointed out in the comments section that I should give Genius Scan a shot. So I did.

Genius Scan is one of the more popular apps out there, with more than 1 million downloads on Google Play. The free version of the app is ad-supported and offers just basic features such as scanning and saving documents as a PDF or JPG document. Sharing via email works great in the free version, but if you want to use premium features like Dropbox or Expensify integration, you will have to pay a price fee of $6.99. 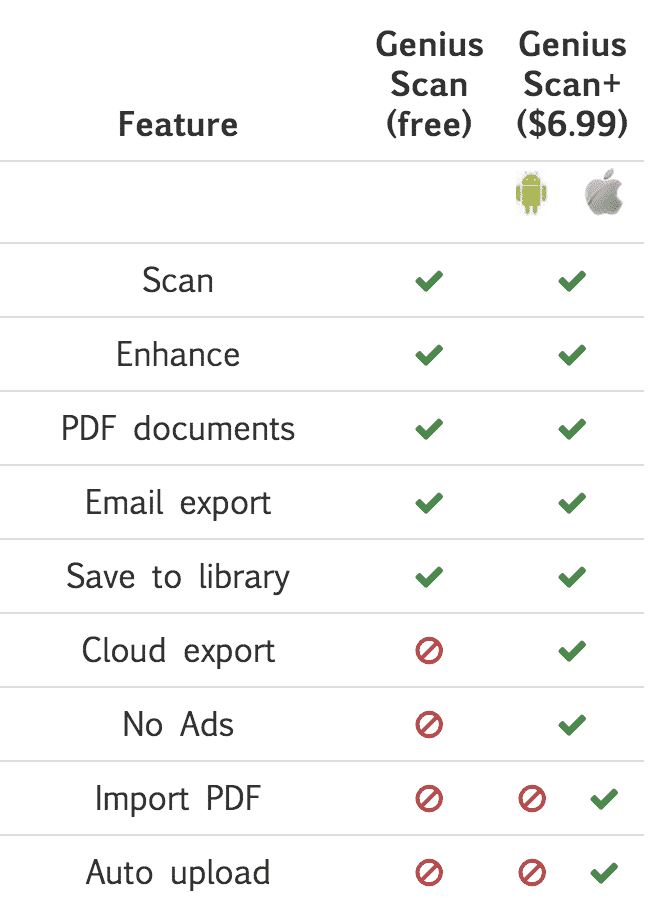 Much like any other popular Android scanner app, the interface is clean and simple. A button in the lower right corner allows you to shoot a new pic of the document you want to scan. In my case, I tried it with a grocery shop receipt. To my surprise, the app was not able to detect the corners of the receipt and auto-correct for perspective.

However, the image quality turned out pretty good, considering that the receipt was crumbled. Genius Scan converts the scanned document into black and white by default, and, unfortunately, I couldn’t find the option to change the contrast and brightness. Nevertheless, the result is very much satisfying, and can be compared to TinyScan’s quality.

In my persona opinion, the $6.99 (or €6.99) price tag for premium features is just a bit too much for features that other similar apps offer either for free or at a much lower price point. With that being said, I can recommend the free version if you don’t mind the non-intrusive ads on the app’s home screen, but if you need the premium features I would advise you to choose another app from this lists.

How to scan documents with Google Drive

Scanning documents on your Android phone with Google Drive is very easy. Just follow the steps below, and you will end up with a high-quality scan (along the lines of CamScanner) right in your own Google Drive, where you can access it from any device with internet access.

The only downside to Google Drive’s scanning feature is the automatic perspective adjustment, which might screw up the dimensions of your scanned document. So, if you hold your Android device parallel to the sheet you want to scan, you’ll be just fine.

Pro Tip: Send all your scans to Evernote, which will automatically recognize the text and make them SEARCHABLE!

The test above have been made with a Nexus 5 (which has an average-quality camera compared to other popular Android handsets), with a single A4 sheet of paper in an average-lit room with warm LED lighting.

Scanning documents, saving them as a PDF file and sharing them with other people is very easy. The best apps out there give you a pretty high-quality result, which you can use for both personal and professional use. However, desktop scanners are way ahead quality-wise, and you shouldn’t expect anything else.

If you find a way to get higher-quality scans with your Android phone, please leave your suggestions in the comments and we will make sure to test it out and update this article!