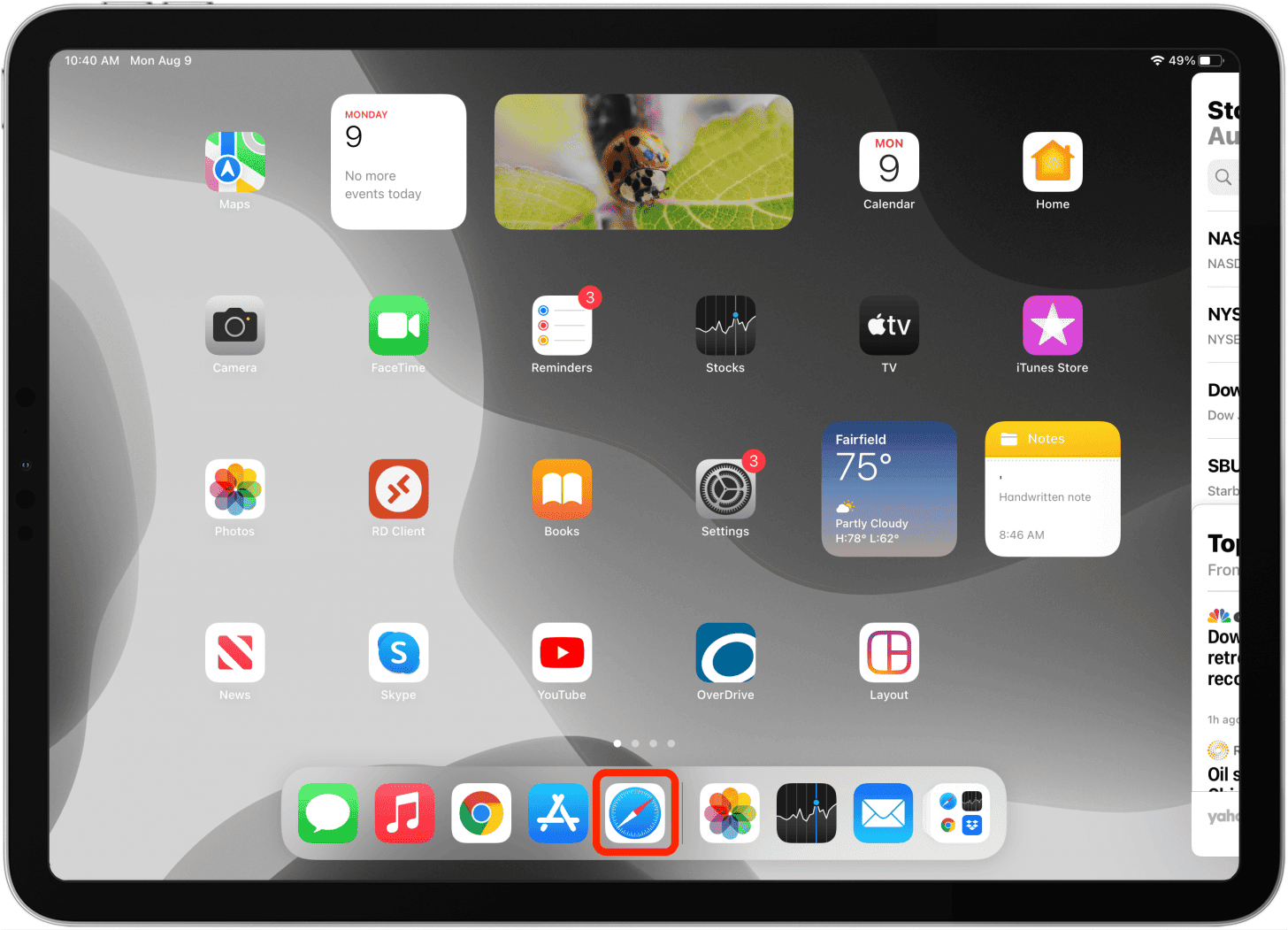 You should not expect your iPad to perform at the same level as a desktop or laptop computer. Applications on the iPad are similar to applications on a PC in that you may multitask and split screen in them. Because of the device’s multitasking capabilities, you may operate on 2 or 3 applications at once and move text, photos, hyperlinks, or even folders between them.

Using Split Screen or Slide Over, you may multitask on the iPad while splitting the display, or you can totally disable these functions.

Note: Are using an iPad Pro or a newer model to split screen. You can also split screen on a latest iPad Air 2 or a younger iPad Mini 4.

To make advantage of these capabilities, you must first make sure that your iPad’s settings for multi-app usage and gestures are activated. Access the function’s menu by going to Settings > Home Screen & Dock. If you haven’t already, activate the Allow Multiple Apps, Picture in Picture, and Gestures options. 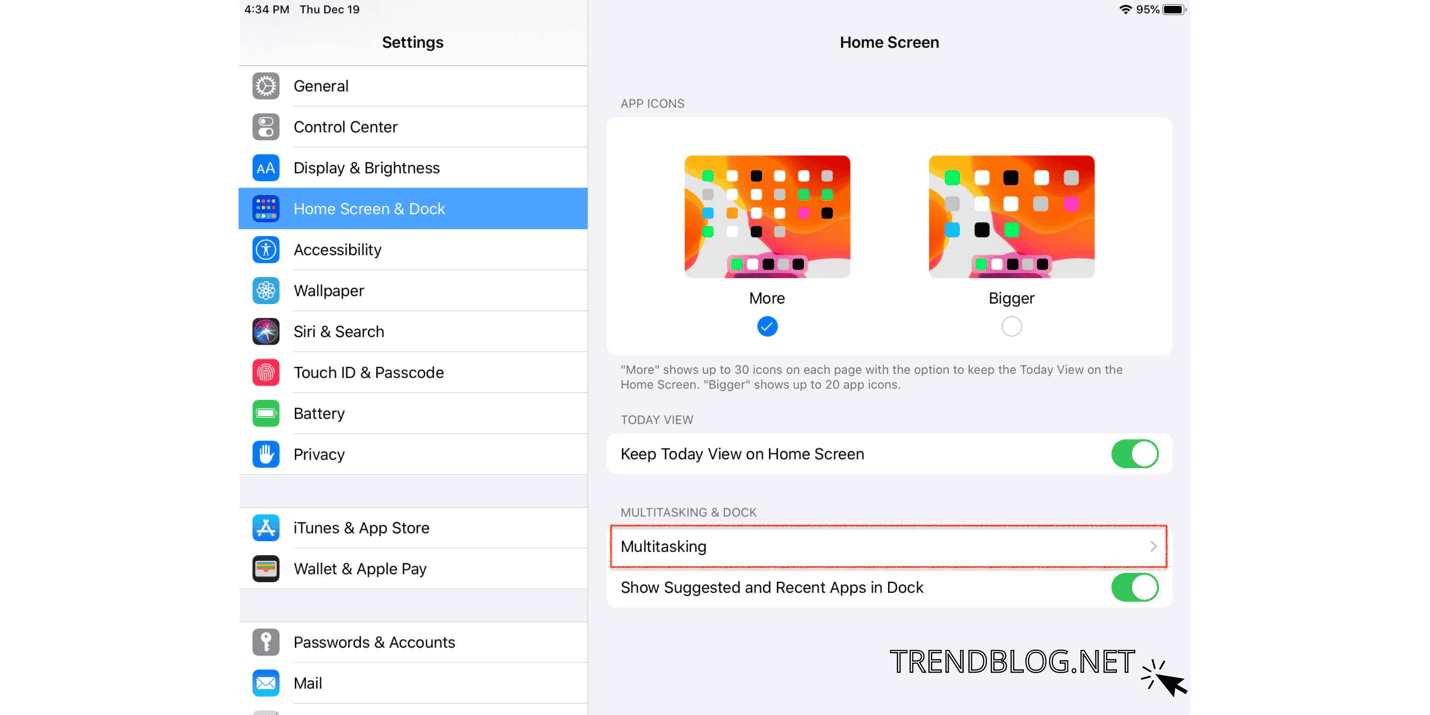 When one of the programmes is in the dock, multitasking will be much simpler. As a result, move the applications you intend to launch towards the dock prior you begin as a good idea. Slightly slide upward through the screen from bottom to reveal the dock after opening your initial app, say Chrome.

While holding down the second app maybe Mail for example, move this to the left half of the Chrome screen until a little vertical window appears. Once you’ve released your grip on the Mail app, it should appear as a hovering pane on the left side of your screen. With that, you’ll be in Slide Over mode for the app. Swipe right to remove the hovering app, then swipe left to bring it back again in the day or evening.

View Two Pages Side by Side

Only a small volume of info may be shown by using the Side-by-Side Slide Over feature. If you wish to view more of an app, you’ll have to use Split Screen mode to adjust the dual application windows that are now open.

The two windows’ widths are now adjustable. The display for Mail decreases when you hold it down the thin vertical charcoal line in the middle of the boundaries of different apps and drag it to the right. When every screen reaches the desired size, let go of the grip on it. 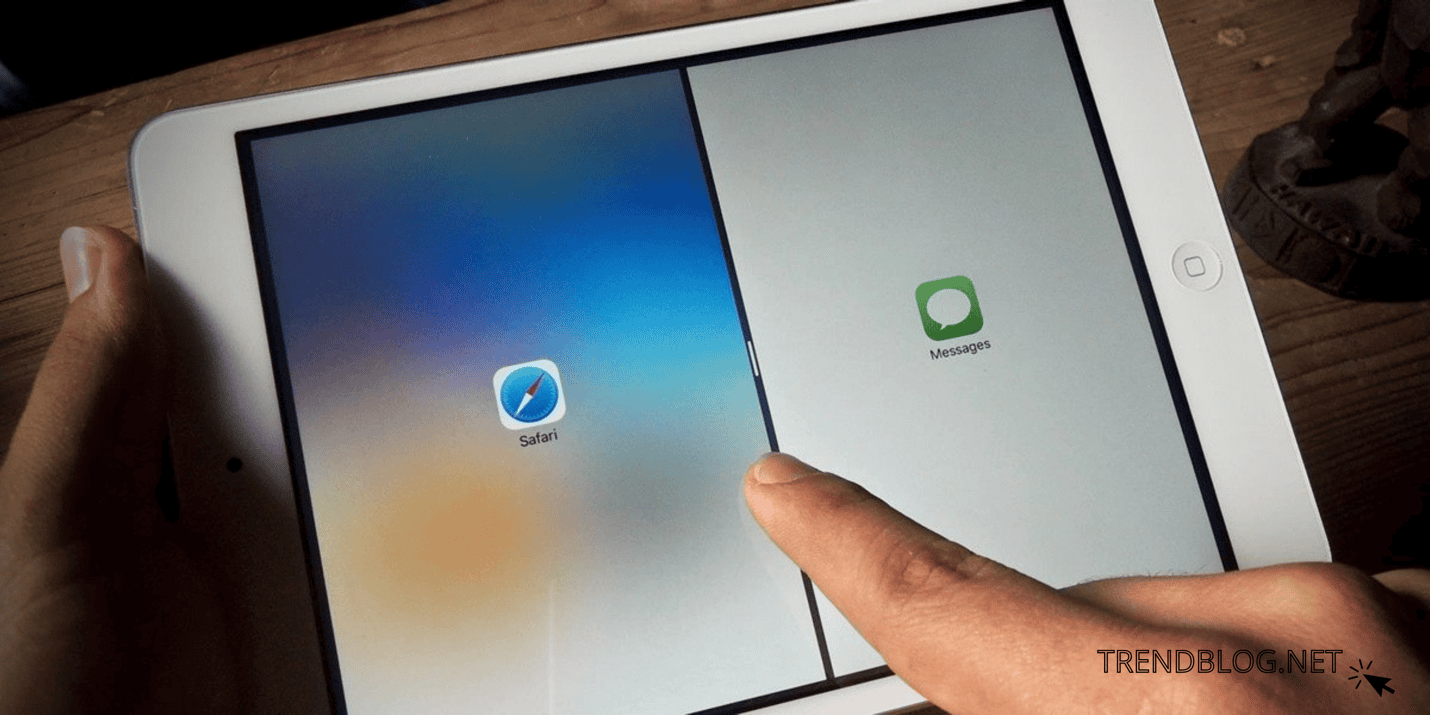 The Slide Over and Split Screen features aren’t compatible with all iOS applications. You’ll have to try out a few different applications to find out which ones function with it. Both modalities are supported by Instagram and Discord, not by Spotify or Facebook. All Apple applications, of course, support both options.

Also check out our article “How to Clear Cache Data on Iphone/ipad and Speed It Up: Chrome, Safari, & Much More”

Slide Over and Split Screen modes on the iPad let you see 3 applications at once. Using Split Screen mode, choose a third app and press down the thumb on it until it pops up in the display’s middle, where it can be seen clearly.

Allow yourself to be released from the grip you’ve taken. Applications in Split Screen and Slide Over modes are both still available. After dragging this to the middle, the floating application will emerge to any side of the screen. The application on the other edge of the window will be replaced if you move it there.

Many views of the same application

You may run three different versions of the very same application at about the same moment using iPadOS 13.1 or later. Many programmes, including as Twitter, Chrome, and Instagram, support this manoeuvre in Slide Over or Split Viewing mode.

If you launch Safari, for example, you may move the Chrome icon from of the docks to Slide Over or Split Screen mode before closing Safari. You may see two separate web content side-by-side using the application’s side-by-side opening feature. You may launch a new version of Chrome in Sliding Over mode by grabbing the Chrome logo a third time.

Picture-in-Picture on the iPad: What You Need to Know

Pip already is demonstrated on your iPhone. When you use Picture in Picture, you may simultaneously use other applications like FaceTime and view video files.

The app only runs on the iPad Pro and later, iPad (5th generation), iPad Air and later, or iPad mini 4 and later.

Here’s how to utilise it on your iPad:

Drop & Drop is a fundamental iPad multitask function. This saves you from having to share a piece of material with another programme after all. 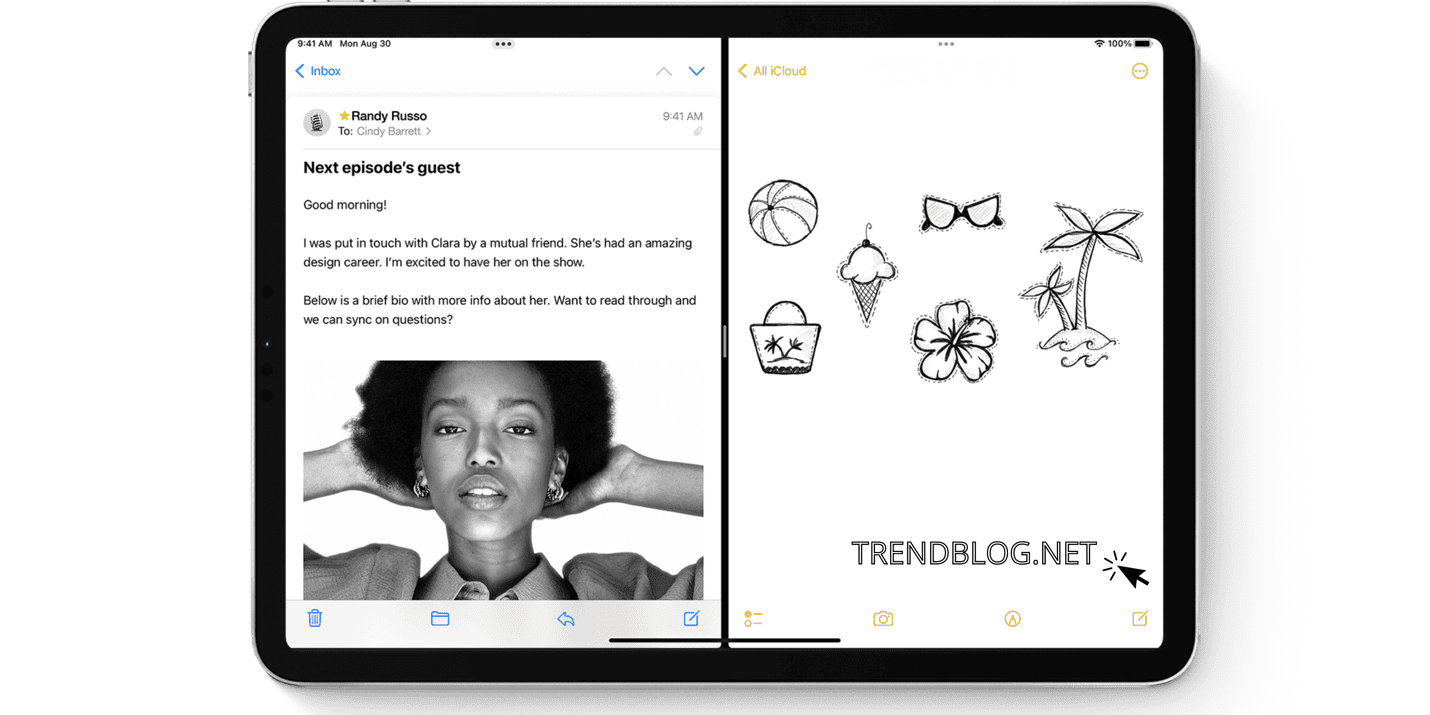 Dropping items through one application into another is a lot easier than dragging and dropping them through one programme to another. In ipads Splitting View, Drag & Drop is the simplest to utilise; however, it may also be used in Sliding Over.

To utilise the iPad’s Drag – And – drop feature, follow these steps.

Slide Over or Split View: How to Drag and Drop Multiple Items

Assume user wants to add a few photographs on the text in the document.

Gestures & Shortcuts for the iPad in Multitasking Mode

Apple brought new motions to the tablet with the release of iPad Pro models without a Home-screen, along with a new method to launch the iOS App Selector. iPad users still may pinch applications closed and slide between them by using four fingers.

Is Split View possible on the iPhone? 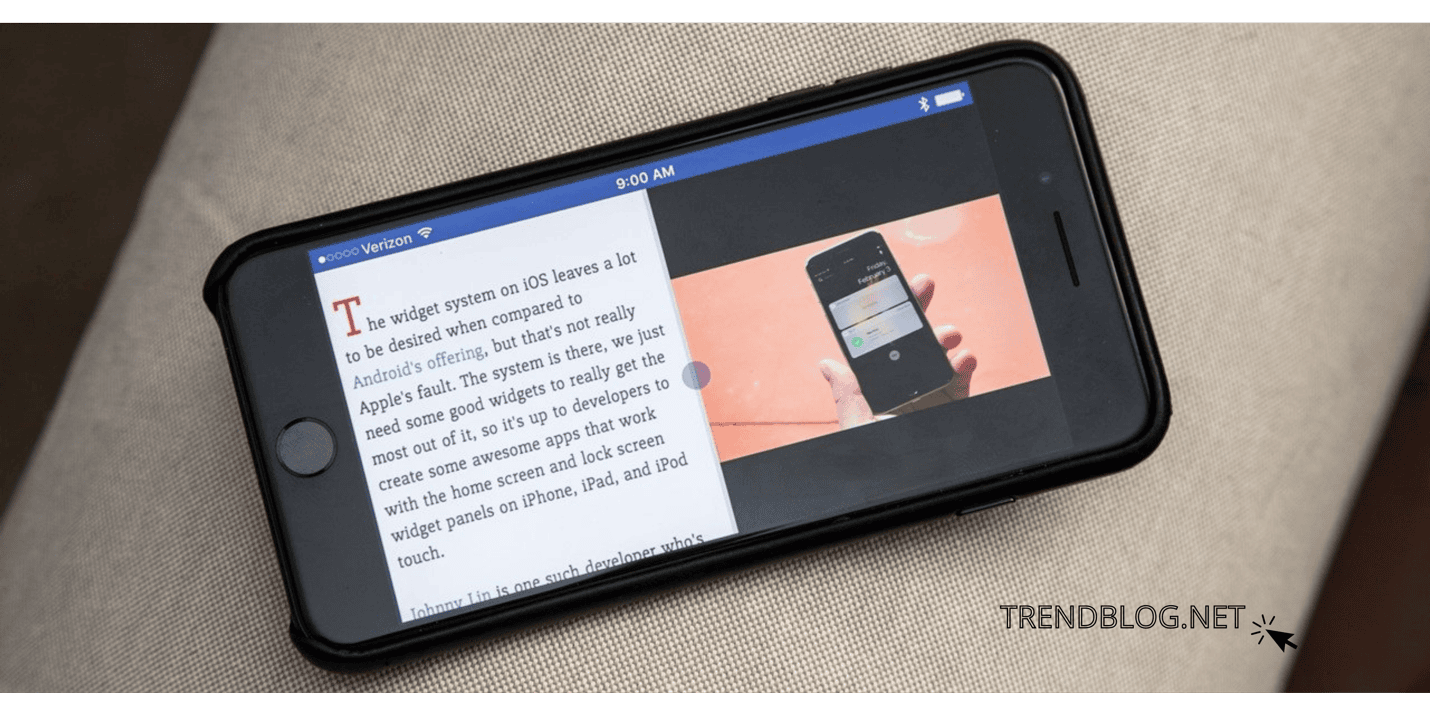 When it comes to the iPhone and wanting a two-app view like many Android devices, we’ve got some bad information. Split View is now exclusive to the iPad.

It’s a little restrictive. After all, it’s possible that Apple is on to something here.