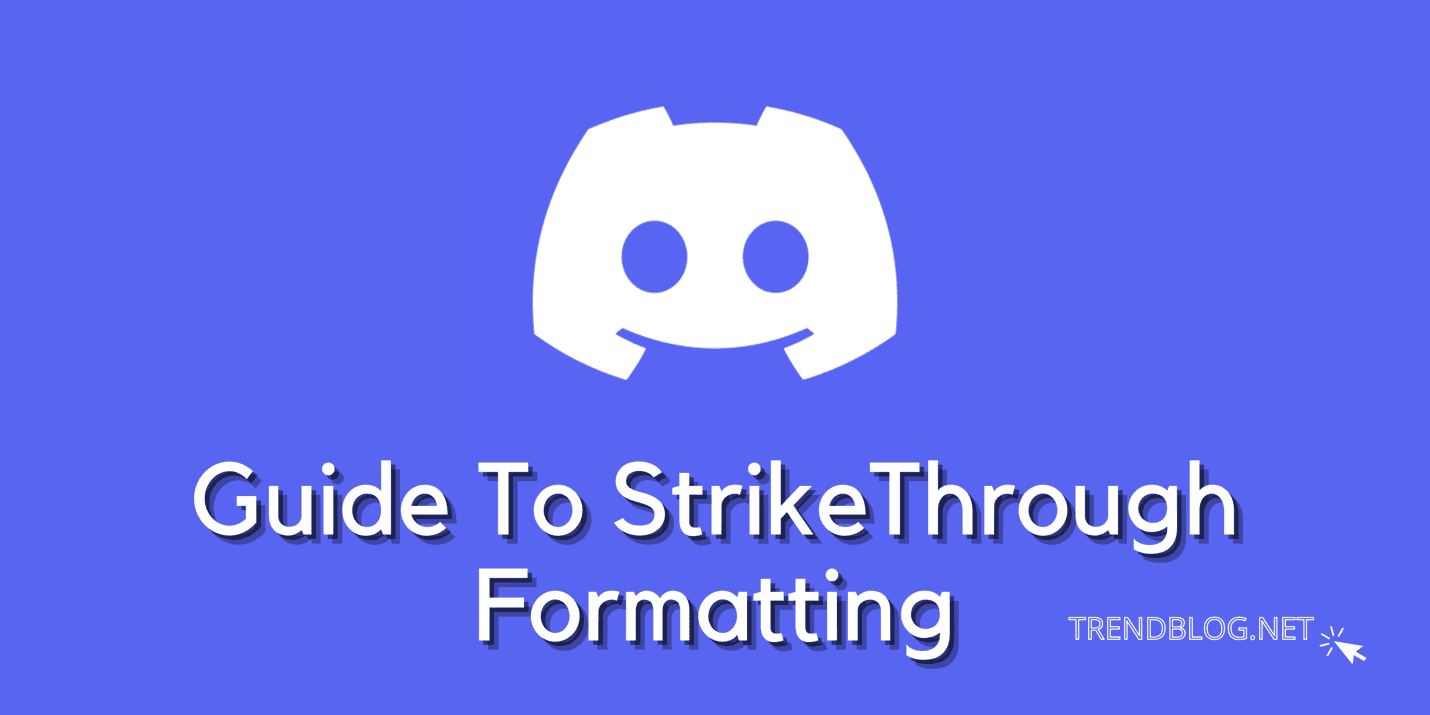 If you’re a newcomer to Discord, it may seem confusing at first. As a newcomer to a large chat room, you may find it difficult to keep up, particularly when the topic is going at breakneck speed.

Content markup, Strikethrough or structuring your text with punctuation marks, is a Discord essential that you should get familiar with.

However, despite the fact that the service is primarily focused on voice communication, which allows players to coordinate their online activities, the chat function of the service is robust and well-rounded. Thus, Discord has grown to be a highly popular platform outside of the gaming community.

Markdown Text: What You Need to Know

Markdown Text, a markup language that employs plain text for formatting, is used by Discord. Basically, it turns plain text into HTML, which is subsequently shown in a browser. To skip through this information directly check the information below under the Header Strikethrough.

As long as the formatting codes aren’t too hard or long, users may produce a broad range of visual effects by just inputting regular text as well as the format codes. Bold, italicise, and other similar text effects are all possible with this feature. 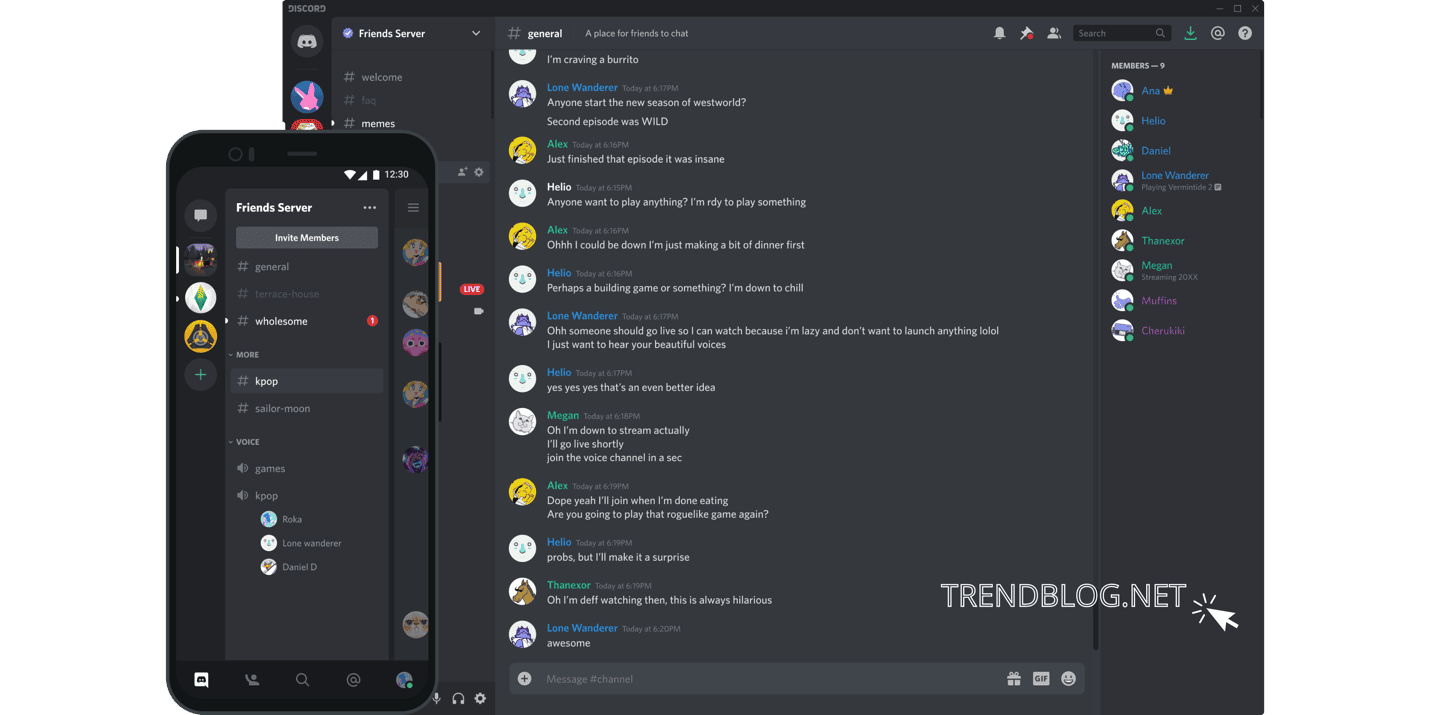 With Markdown, you don’t have to worry about actuating tags anymore since it’s simpler to use than HTML. Markdown has a wide range of possibilities, and we’ll go through the most common ones in this article. One simple rule underlies every one of these formatting codes: following the initial text to be transformed, add a distinct character or characters of your choosing.

Adding it before or after a command activates the effect; the other way around turns it off. Discord’s chat window allows you to write in codes, and the altered text appears inside the conversation box for everyone (including you).

Other well-known websites, such as Reddit, employ Markdown to enable its users to effortlessly customise their content without needing to know HTML.

This fast introduction to Markdown has now been completed. Let us now have a look at some typical text effects that may be created in Discord using Markdown.

How to Make Use of Markdowns

To correctly utilise markdowns, you must understand that the characters must appear in front of and after the text. As an example, if you want to build a markdown document, you must utilise the precise number of keys. Unacceptable procedures will result in what is shown above if you ignore them:

Here’s a quick tutorial on how to format text in Discord by crossing it out and adding markup. For Mac and PC users, this is available in Discord, as well as for android and Apple smartphone users. 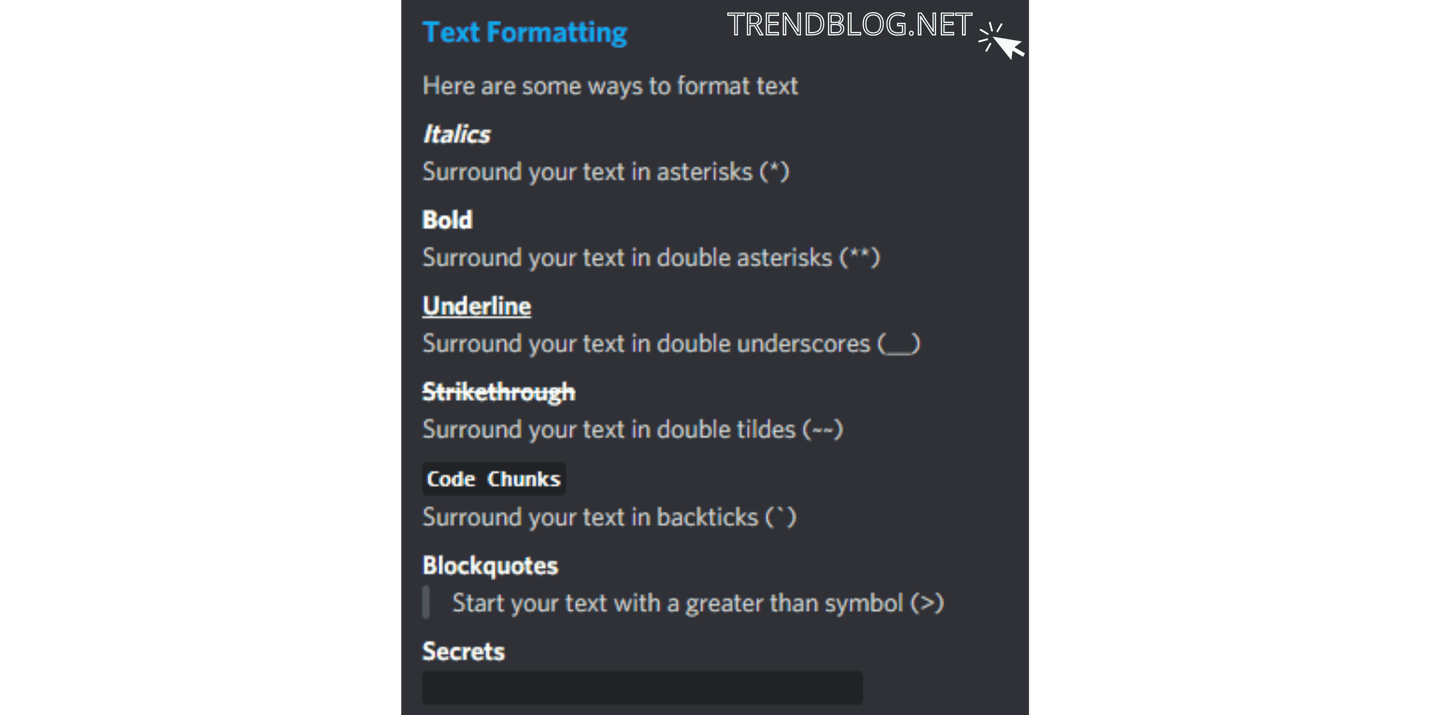 Adding Strikethrough Text to Your Document

Use the double ‘~~’ tilde character to strikethrough text.

Bold text is created by placing two asterisks ‘**’ before and after the text.

How to Make Italic Text

To italicise text, use an asterisk after each word you want to highlight.

Effects may be combined by simply adding the codes together. Bold, italicised text is created by placing three asterisks in front of a word.

Combining many codes allows you to get engaged (and look ridiculous in the process). Markup doesn’t give a fig about what you think. Markup is completely unbiased. Markup just renders the content you instruct it to.

Add Spoiler Tags to Your Articles

Use a spoiler tag to hide messages from those who don’t want to view it. Discord hides text between double pipes when you use the ‘|’ pipe character.

The spoiler is obscured in the displayed text, The information is exposed if a people click on the dark area. This allows you to post as many spoilers as you like, knowing that only those who are interested will see them. That’s when it’s their fault if they accidentally ruin things for someone else.

To know more about spoiler tags, check our article “Latest Feature of Discord – Spoiler Tags | Use it to Hide Messages and Images in 2021”

Adding Blank Lines to a Document

In order to generate a blank line wherever you want in your remark while typing a lengthy message, press Shift + Enter while doing so.

It is not possible to directly cite another user using Markup, however there is a workaround utilising the Code Block capability. You may emphasize codes in the content using the Code Block functionality. While this isn’t a quotation in the strictest sense, it does provide you the option of using a distinct font for the text so that it sticks out. 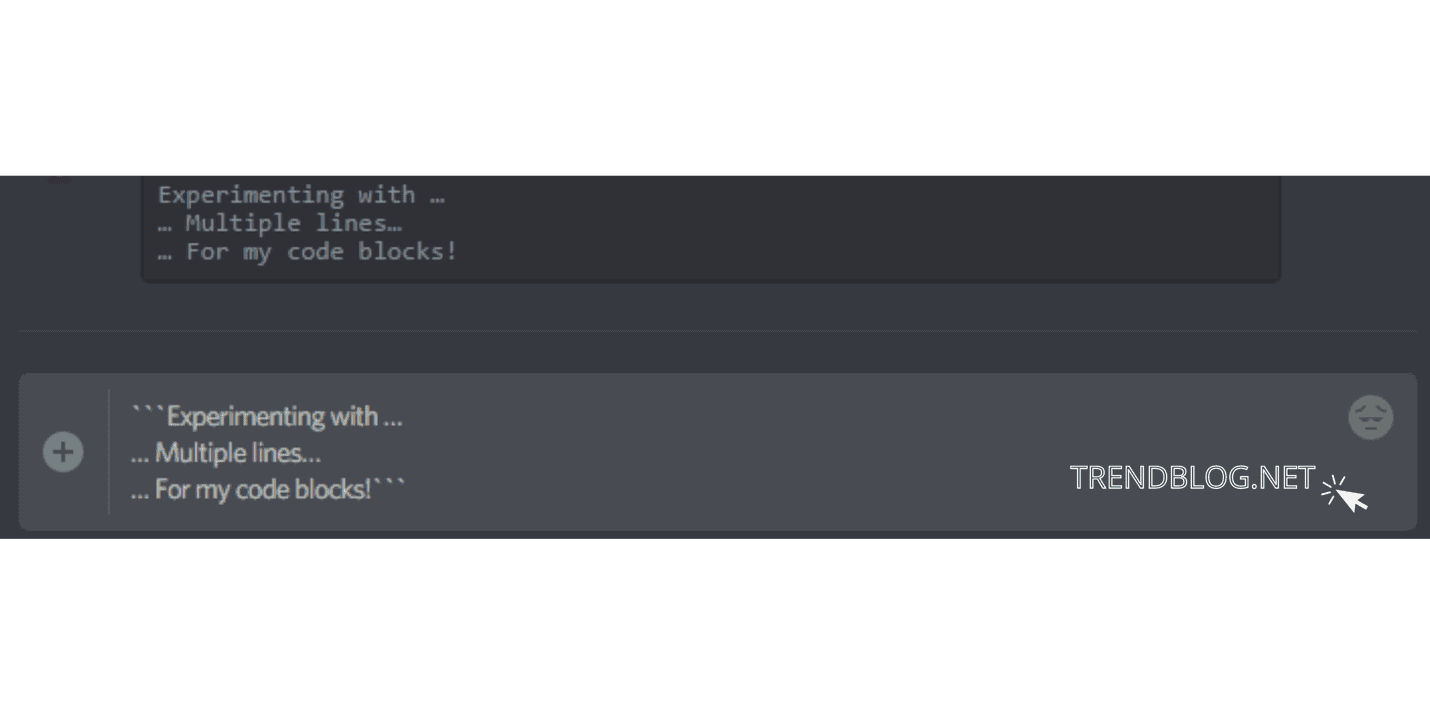 The grave accent “‘ character, which can be found on most keyboards to the left of the 1, may be used to construct a one-line code block. When you use the grave character to wrap text, it will look differently in conversation.

Adding three grave accents to the start and the end of the paragraph will allow you to build code blocks with several lines.

Is It Possible to Combine Several Formatting Styles in Text in Discord?

Yes, you may mix and match various Discord text formatting instructions to give your message a more polished appearance. Here are a few such instances:

Text in italics and strikethrough

For example, the same text may be highlighted using the strikethrough and strong font keywords in Discord. Put two tildes (~) plus 2 asterisks (*) at the beginning and end of the text, respectively. The typefaces in Discord are bold and have a line through them.

Italics and underlining in Discord text may be combined by using an asterisk (*) & 2 underscore following the initial text, respectively.

You may use Markdown to create a variety of text effects in Discord by understanding how to utilise it. Fortunately, learning Markdown is a doddle. 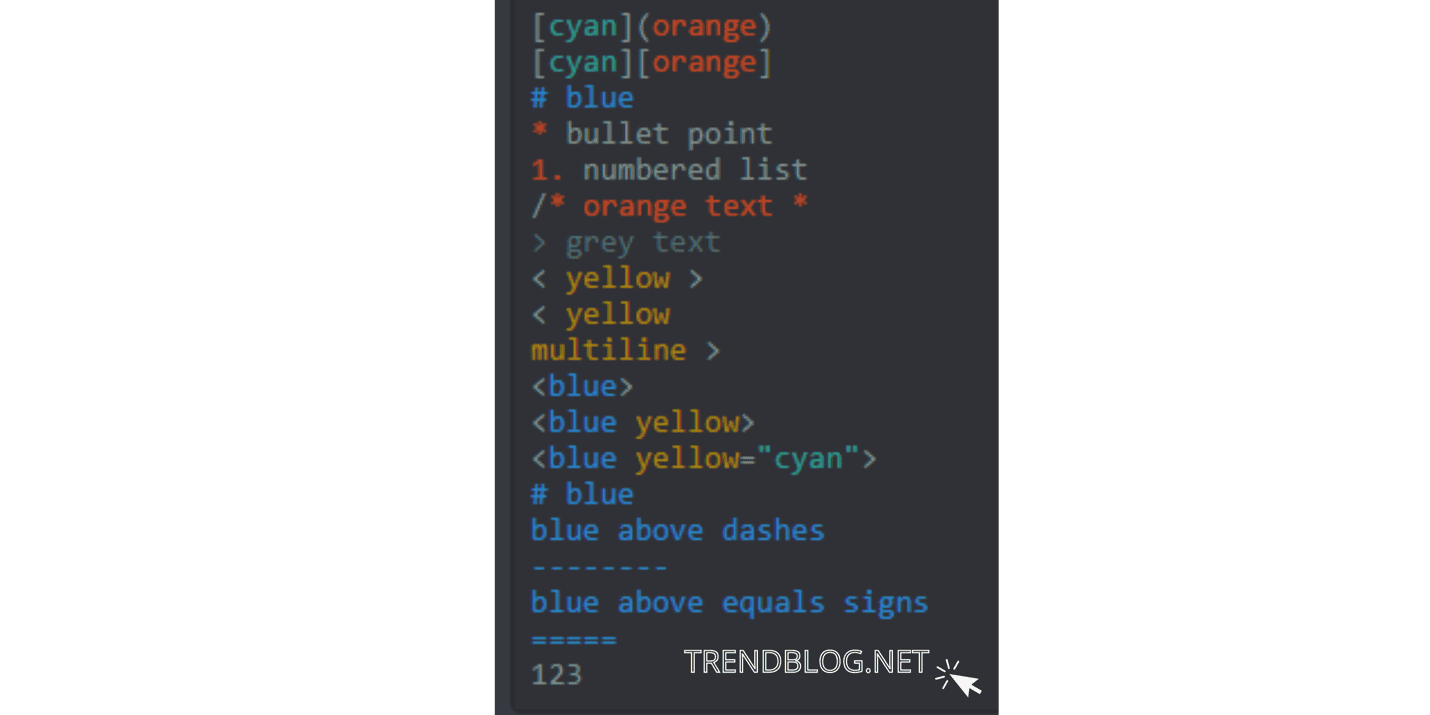 Even though Markup is strong, it isn’t limitless, and there are certain things you just cannot accomplish with it. You should be able to add some colour to your text conversations now that you’ve learned how. Are there any more applications for Markup in Discord that you can think of? Let us know what you came up with in the comments section below!

Also Check our Article “How to Fix Discord Installation on Window 10?“