You are here: Home / Gaming / Study: eSports events are a part of the gaming scene

In the past years, gaming and especially eSports have become more and more popular. Events like the League of Legends LCS World Championship or Dota 2’s The International bring thousands of people together, filling stadiums, living rooms and bars. Eventbrite, a ticket and booking platform, surveyed more than 1500 attendees of live eSports events worldwide between 2013 and 2014, resulting in an interesting study about gamers today.

eSport events are part of the gaming community

Gaming is social. It’s no longer the nerd who plays in his parents basement, trying to avoid sunlight. 61% of surveyed gamers claimed to visit gaming events in order to connect with their gaming friends in person. With the rise of voice-chat software like Skype, gaming has become more and more social and people communicate a lot. Naturally, people want to meet their peers in person. But it’s not only about their friends. eSports pros are regarded as idols and people want to meet them.

Attending a eSports event offers the opportunity to see professional gamers play games live. While this might sound weird to a non-gamer, it can be quite an enjoyable experience for people interested in the game. Events typically offer live commentary, interviews and reviews of gaming scene – just like any other sports event.

For the same reason someone would attend an NFL game, I love watching the game played at the highest level.

After going to an eSports events, gamers are more likely to play the game more frequently, purchase new content related to the game or follow a certain team they saw live. Does that remind you of something? Yes – every other (physical) sport. With roughly 20% of event attendees willing to pay up to $ 200 USD for tickets, the gaming industry is booming. Give it a few more years and the students (44% of participants) will have more disposable incoming to spent on gaming. 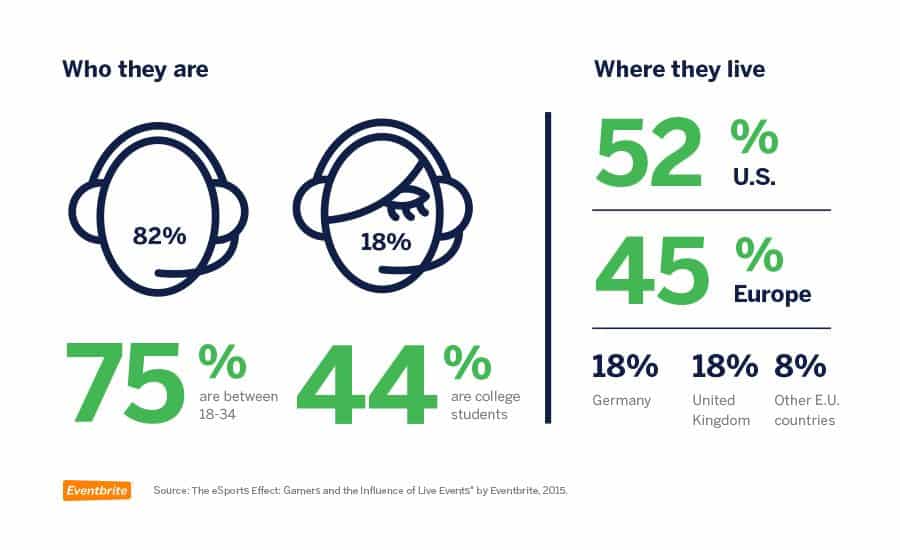 Another interesting fact the study revealed is that 38% of participants watch 10+ hours of game play every week. Gaming seems to play an important role in the live of eSport event visitors as 67% stated that they play at least 3 hours per day and 30% consider themselves hardcore gamers, playing more than 4-5 hours on a daily basis. While MMORPGs like World of Warcraft used to be the most popular games amongst hardcore gamers, nowadays League of Legends, Dota 2 and other MOBAs are the most played games. Surprisingly, MOBAs (Multiplayer Online Battle Arena) for gaming consoles like the Playstation 4 or Xbox 1 rarely exist.

All in all it is great to see how the gaming community is developing. eSport events are getting bigger and bigger every year and watching games together with friends is not limited to (physical) sports anymore.

The complete study can be downloaded on the Eventbrite website.