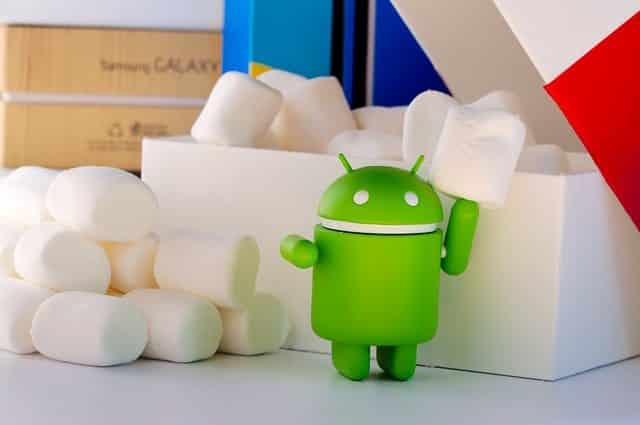 The hidden System UI Tuner menu adds more settings to the many ways you can customize your Android device. You can change settings such as whether the battery indicator shows on the status bar and whether that icon shows the percentage of battery left.

Enabling the hidden System UI Tuner menu is easy, if your device supports it. Here are some of the settings you can currently change using it (as of the time this article was written).

To enable the System UI Tuner menu, swipe down from the top of the screen to open the Quick Settings menu. Then, hold your finger down on the “Settings” (gear) icon until it starts spinning, which should take about 5-7 seconds.

NOTE: When pressing down on the “Settings” icon with your finger, it can be hard to tell when the icon starts to spin. We found it was easier to tell if you use a stylus.

Lift your finger once the icon starts to spin. The Settings automatically opens and a message displays saying that the System UI Tuner has been added to Settings. 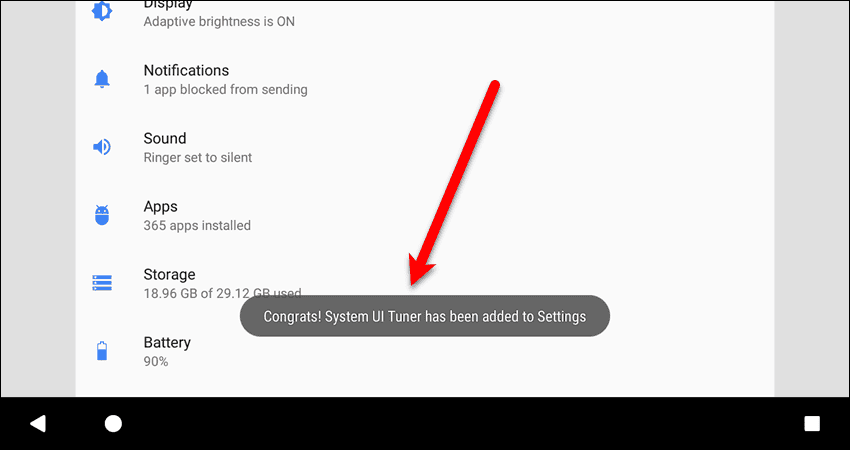 When the System UI Tuner menu is enabled, there’s a small wrench on the right side of the “Settings” gear icon. 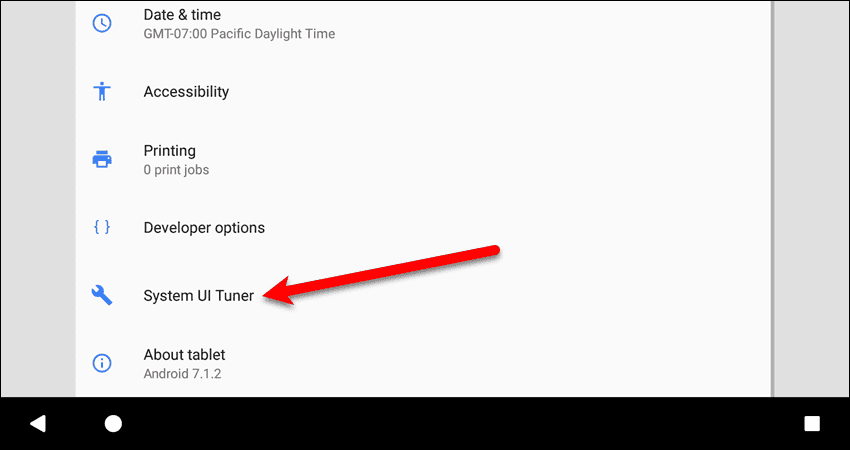 A warning dialog box displays, giving a disclaimer about how these features may change, break, or disappear in future Android releases. Tap “Got It” to close the dialog box.

You are also reminded again, at the bottom of the menu, about how the features in the System UI Tuner menu are experimental and may change, break, or disappear in future updates to the Android system.

A list of settings displays. These settings are icons that can, and will, display at one time or another on your status bar. If there are some settings you don’t use, you can turn them off.

To hide a setting on the status bar, click the slider button for that setting so it turns gray. Enabled settings have blue slider buttons. 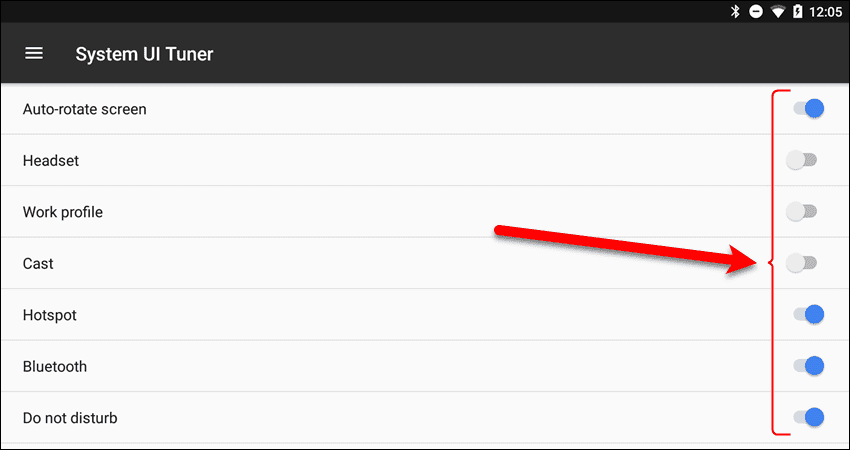 One of the more useful settings is “Battery“. You can hide the battery icon if you choose, or you can display it with or without (default) the percentage on the icon. 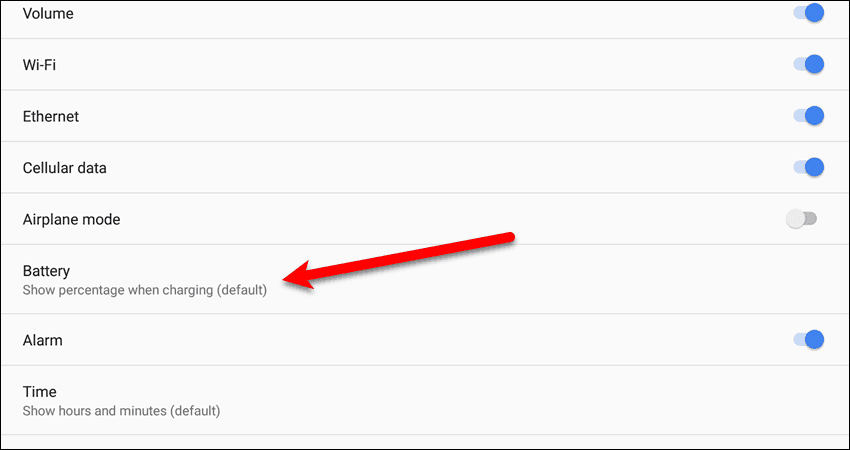 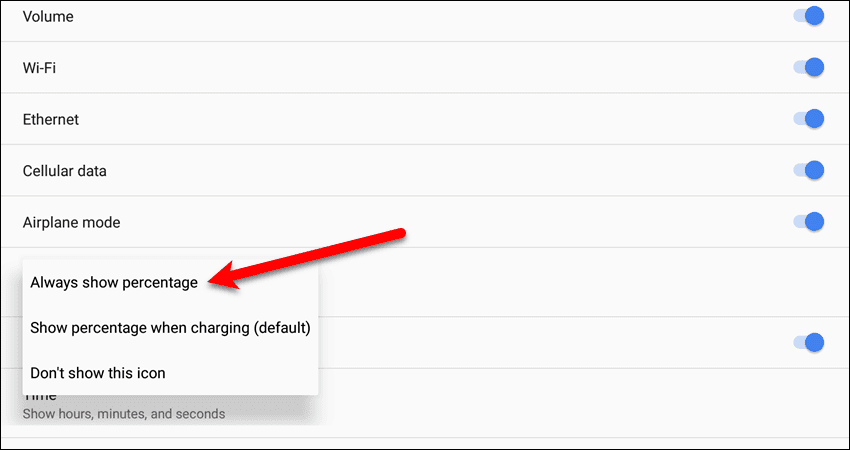 Now, tap the back button on your device to return to the main System UI Tuner menu and then tap “Do not disturb“.

Changing The Power Notification Controls On The Tuner Menu

Tap the back button again on your device to return to the main System UI Tuner menu. This time, tap “Other” and then tap “Power notification controls“.

The “peek” feature listed under the various levels is the process of popping a little card over the display. 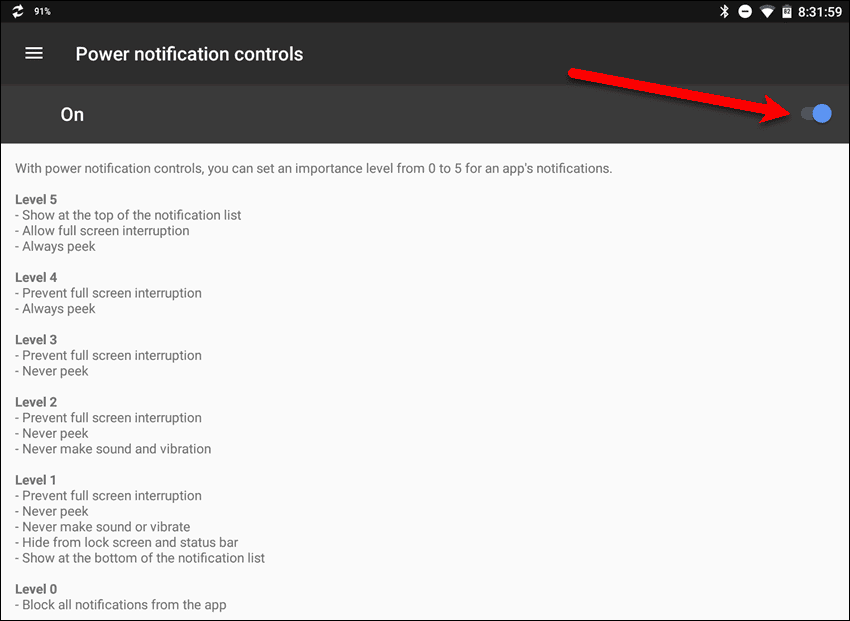 With the “Power notification controls” setting on, you’ll see a line under “Importance” with six dots on it when you go to “Settings” > “Notifications” and select an app in the list.

Select the level of importance for the selected app’s notifications by tapping on a dot on the “Importance” line. The levels go from “0” on the left to “5” on the right.

The options below the “Importance” line vary depending on the selected level of “Importance“. 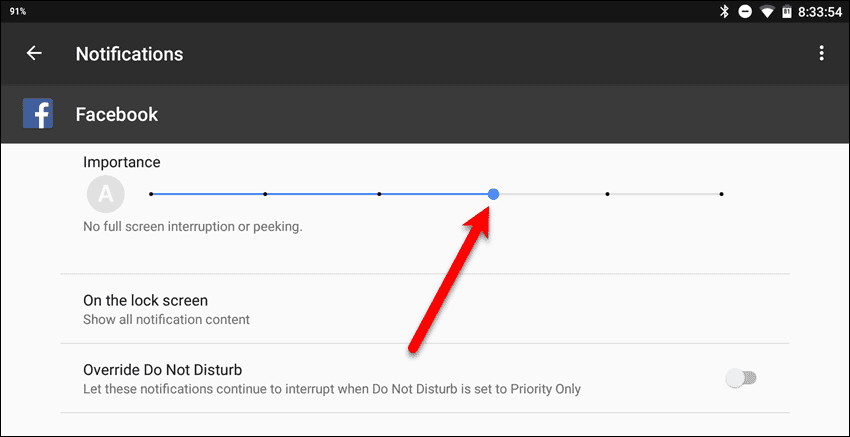 If you decide you don’t want to use the settings in the System UI Tuner menu, you can easily remove the menu from within the Settings. You can do this either in the Settings or from the Home screen.

From the System UI Tuner menu screen in the Settings, tap the menu button (three vertical dots) in the upper-right corner of the screen.

Tap “Remove from Settings” on the pop-up.

To remove the System UI Tuner menu from the Settings while on the Home screen, drag down from the top of the screen and then tap and hold down on the “Settings” (gear) icon again, until it spins.

For either method you use to remove the System UI Tuner menu from the Settings, a dialog box displays asking if you want to remove the menu and stop using all of its features.

If you’re sure you want to remove the System UI Tuner, tap “Remove“.

What settings have you used on the System UI Tuner menu? Which settings are you hoping they add as permanent options in the Settings? Let us know in the comments.