The Story Behind The Android Logo

We all have seen the minimalistic yet cute-looking logo of the Android operating system. You might even read this on your own Android device right now. But who came up with this little green dude and what kind of speculations about its origin are out there?

Irina Blok, who was part of the launch campaign, designed the green robot. Initially, the logo was intended to be for developers only but consumers loved it and so it became the official logo.

The idea was to create the open source logo (very much like open source Android platform), that was released to the developer community without regular brand guidelines. – Irina Blok

Has the Android logo been stolen?

There are voices out there that claim that the design of the android has been taken from an old Atari video game called “Gauntlet: The Third Encounter”. If you check the video below, than you can see that there is a close resemblance to one of the game’s characters called ANDROID.

Besides that, some claim that the Android logo was inspired by the original designs of R2-D2, the beloved droid from the Star Wars Saga. 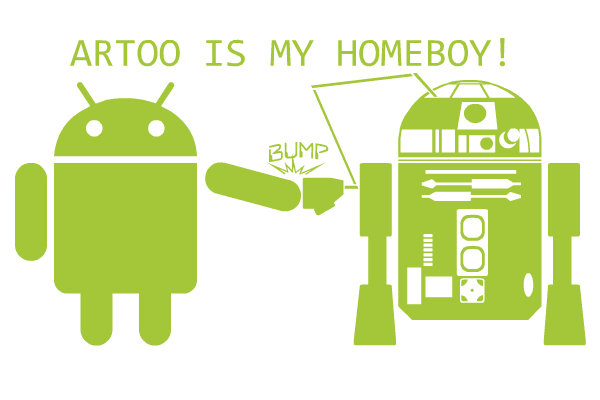 Irina explained, however, that there have been countless of logo design drafts out of which the Android logo had been chosen. In fact, the final logo was one of her first sketches she did.

Taking into account that the theme for the logo drafts was robots and androids and that many initial drafts were designed I doubt that this green dude completely originated from the Atari game or from R2-D2. But everyone has to make his own judgement. Below you can see the different approaches Irina took while she was coming up with designs for the logo.

How do you like the logo? Do you think it fits the operating system behind the logo? Let me know in the comments!

Best Android Launchers & How To Use Them