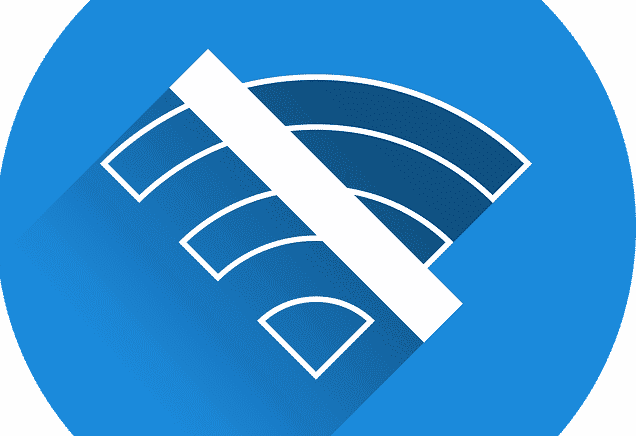 It’s a jungle out there on the web. You are trying to get some meaningful work done to pay the bills but you have Facebook whispering “check me again, check me again…“. Cue several hours later, and the amount of work you’ve done would fit onto the back of a postage stamp. So what you need is an effective way to beat procrastination and be a productivity genius.

This is where Google Chrome is your saviour. Developers have made extensions that will block those evil time-wasting sites so you can get on with work.

Here are five extensions that I tested and which I would recommend you try out, if you are unable to tear yourself away from cute kittens or skateboarding dogs. 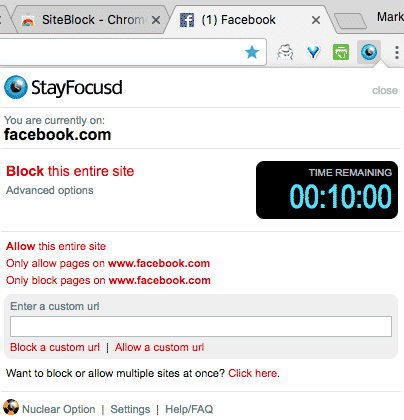 StayFocusd is a very easy-to-use plugin that allows you to specify the maximum amount of time per day for sites on the block list. Once the maximum time has been reached, those sites are inaccessible for the rest of the day. Although obviously, if you deleted or deactivated the extension, you could get around that restriction.

Once you are on a site you want to restrict access to, click the StayFocusd icon and the pop-up shown above will appear.

The maximum browsing time per day is set by default to 10 minutes. But in the settings, you can change that value to whatever you want.

Other features include specifying which days and time periods the extension should work on (Monday to Friday, 9.00am to 5.00pm would be good), a whitelist and a blacklist for allowed sites and blocked sites, and syncing between your devices.

There is also something ominous-sounding, called “The Nuclear Option“, where you can block sites immediately for a certain number of hours, which is totally independent of the usual settings.

Although you could get around the restrictions by deleting the plugin, StayFocusd amusingly gives you a task to do if you want to override the settings. It is supposed to be not totally easy but not that difficult either. Just enough that it might make you think twice about wanting to watch skateboarding dogs again. 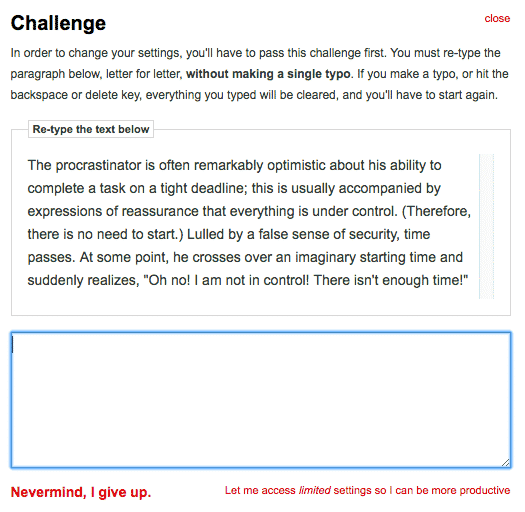 The difference with BlockSite is that it is not a time-limited blocking feature, like StayFocusd. This blocks specified websites permanently, unless you remove them from the block list. But many writers I know love this extension nevertheless. You can just deactivate the extension when you don’t need it, or add a website to block then delete it later.

There’s a blocking feature for all adult websites and an easy blocking list where you can add and remove sites in seconds. A really useful feature is being able to access BlockSite through Chrome’s right-click menu.

“Nanny For Google Chrome” is notable for being able to block using keywords. So if cute kittens are your thing, you can say “kittens” in the settings, and ALL websites with kittens will be nuked for a certain time period. Don’t worry, the kittens themselves will be unharmed.

Nanny is very customizable. With each URL you want to restrict, just type the URL, what days this block rule should apply, and the length of time. Specify the period of time in the day when the extension should be active, and then a certain number of minutes in a certain time period.

Maybe it is just me being over-sensitive but I don’t like the extension being called a “nanny”. This was enough to make me uninstall it. But it works really well nonetheless.

I prefer simple solutions in life, and you can’t get any more simple than Simple Blocker. Just go to the settings and enter the sites that are evil and should be blocked. 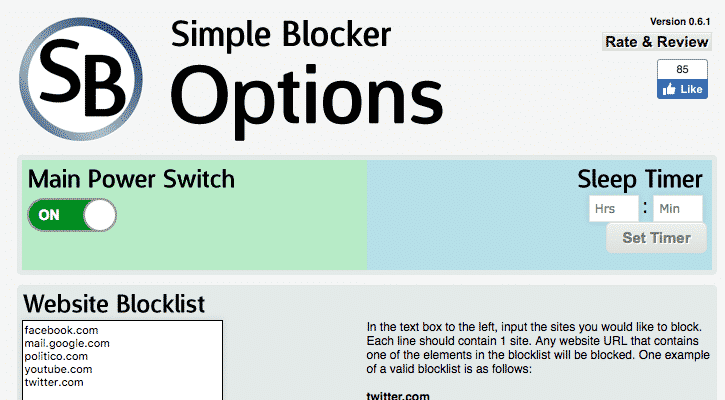 Set the sleep timer for how long you want them blocked off, and off you go. Productivity, here we come. 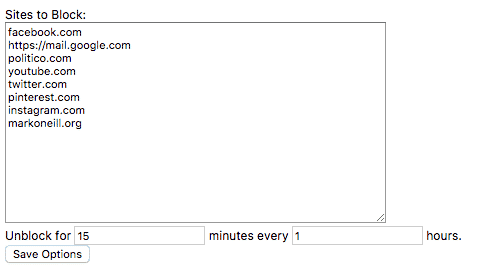 Last of all, we come to SiteBlock (an original name for these things would be nice). SiteBlock is another very simple option where you enter the domains into a box and specify how many minutes per hour should be granted to these sites. If you’re a good boy and do all your work, Mummy will let you on Facebook for ten minutes.

This extension also has a very neat feature where you can block ALL the Internet, except for sites you specify. So if you just need a few sites for work purposes, you can block everything else. This is actually easier than trying to think of every single site you need to block and typing each one in laboriously.

Out of all of them, I much prefer Simple Blocker. But you also have to remember that you need to switch off all smartphones and tablets. What’s the point of blocking sites on your computer if your phone is going to ping you every ten seconds?