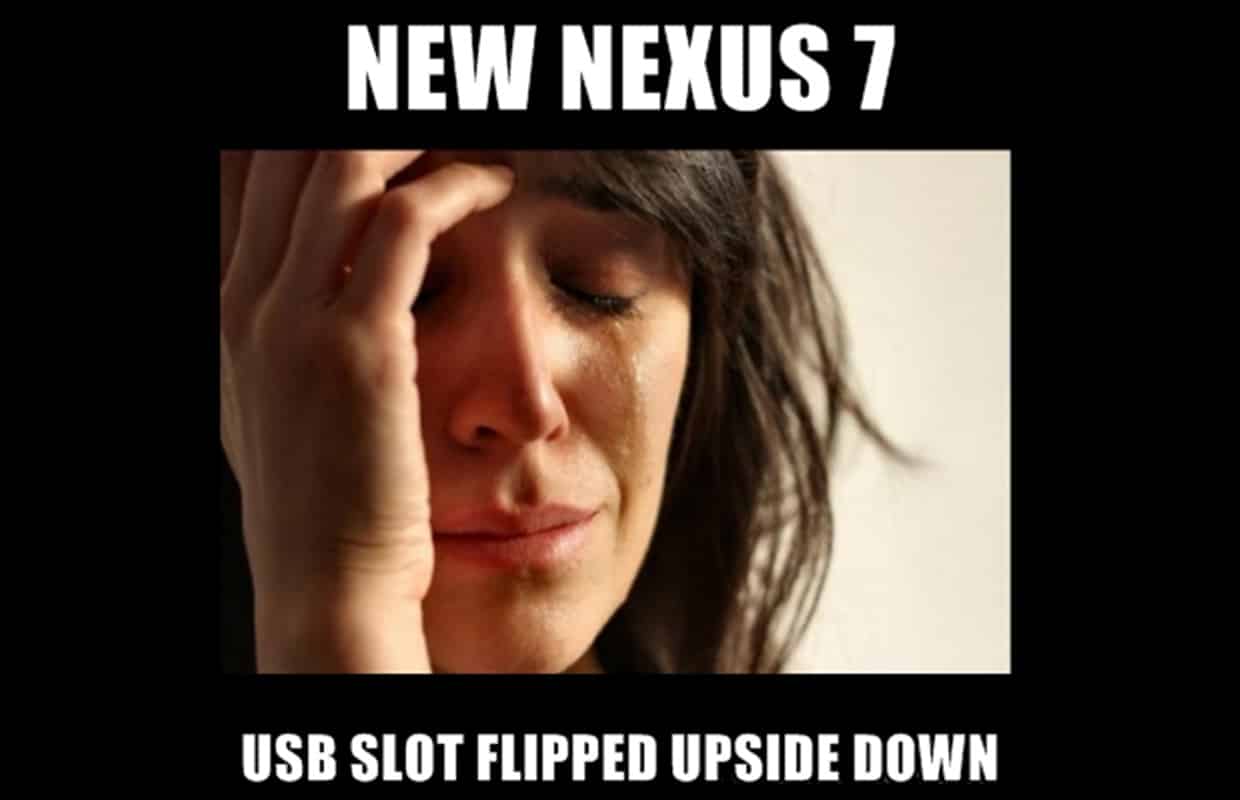 Don’t get me wrong. I love my new Nexus 7. In my opinion it is the best Android tablet on the market. And at its price, no other Android (or even Apple) tablet can beat it. Nevertheless, there are some tiny little details that annoy me about the tablet.

Let’s call this “The Small Annoying Things About The New Nexus 7 2013”.

The new Nexus 7 speakers have a bug that should be fixed by Asus immediately. On the lowest volume setting you will hear a noise coming out of the speakers, no matter what app you are in.

According to several sources and xda threads this is happening because the Nexus 7 controls the volume digitally, instead of having analog controls.

One thing I do most on my Nexus 7 is reading. And the best time to read is, of course, just before going to sleep. This is where the night mode of many apps comes into play. You know this – the background goes black, the text turns white(ish) and your eyes stop to hurt.

The problem is that the N7’s screen is just too bright. The lowest brightness setting is still not dark enough to give you a comfortable night-reading experience.

Of course, it is fixable with a couple of apps that put a dark layer on top of your regular screen, but the brightness settings should be more flexible in my opinion.

Back is a fingerprint magnet

What I loved about my iPad is that the back stayed fingerprint-free, even if I ate chicken wings with my hands. The new Nexus 7 will have them all over the soft-plastic back. You won’t notice them at first, but as soon as you see them it will probably annoy you slightly.

When your Nexus 7 lies on its back on a flat surface you won’t be able to press the power button or change the volume without having to lift the tablet. This is happening because the buttons are positioned on the bottom side of the rounded edges.

The buttons themselves are sometimes difficult to distinguish from each other. They are made from the same material, feel the same and could be slightly higher, to be honest.

I would never think that this would be something that will annoy me. Normally, when you plug in your Micro USB cable in your device, you turn it the normal-way-up (the side with the logo). The thing is that the Micro USB slot on the new Nexus 7 is flipped the other way around. Not a big thing, but slightly annoying, considering that you are used to plug in the cable the usual way.

LTE version receives SMS, but can’t send and open them

Our 32GB Nexus 7 LTE version has recently received an SMS from our service provider when we crossed the German-Dutch border. What we saw was a simple notification, which was not clickable for some reason. So, you can receive SMS, but you can’t even open them again or reply when you dismiss the notification.

In Europe people are still waiting for the Asus Premium Cover to be available in stores. It has been almost a month since the release of the new Nexus 7, but there are still no official accessories on the European market.

In spite of all the things mentioned above, I can recommend the new Nexus 7 to every single person. The price/quality/performance ratio is nearly perfect.

You will enjoy the Nexus 7 as much as the whole trendblog team does.

In case you already have a new Nexus 7, what are the First World Tablet Problems you have? Please share them with us in the comments!