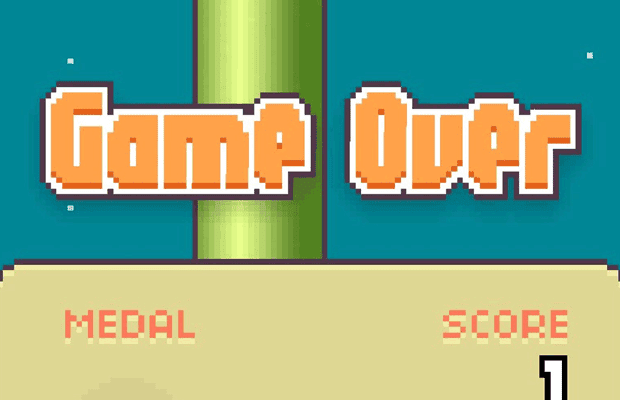 It’s was game of patience, dedication, concentration and emotion. A game so simple that everyone could enjoy and love it. A game that would increase your heart rate and make you feel miserable. Flappy Bird.

On February 9th the developer Dong Nguyen has taken down the indie-game hit from the App Store and Google Play. It took us all by surprise. Why would someone making $50,000 per day kill its cash cow?

This decision has been talked about a lot in the past few days. The tweet announcing the developer’s decision to take down the game has been retweeted more than 140,000 times and covered on a countless amount of tech blogs all over the world.

The reason behind taking down the app was that Dong simply couldn’t handle the attention Flappy Bird was receiving and the money the game was making. He was used to a simple and humble life, so his most recent success rapidly changed it.

I can call ‘Flappy Bird’ is a success of mine. But it also ruins my simple life. So now I hate it.

In other tweets he wrote that he not only wouldn’t sell the app to anyone, but that he doesn’t sell anything he makes at all. Dong neither wanted to sell out, nor change his lifestyle. He stands by his principles. And I think we all should respect his decision.

Even after Flappy Bird has been taken down, people were still going absolutely crazy about it. Some would even pay extra for devices with an installed version of Flappy Bird. Of course, fans sometimes go absolutely nuts, but buying a new phone just to play Flappy Bird? Please…

Anyway, if these people would have done some research on the internet they would find out that there is a much simpler way to get Flappy Bird on your device.

How to download Flappy Bird on your Android or iOS device

Although not reachable through Google Play or the App Store, there is still a way to get Flappy Bird on your mobile devices.

Disclaimer: for legal reasons we won’t provide you guys with a downloadable file, but we can point you to it. Keep reading.

Do a quick Google search for “Flappy Bird apk”. You will quickly find a large amount of sources where you can download the app installation file directly onto your device.

For iOS devices (only jailbroken):

If your device is jailbroken and you have installed a tweak for syncing IPA files, do the following:

Do a Google search for “Flappy Bird ipa”. The search results will show you numerous sources from where you can download the Flappy Bird ipa installation file.

Now open iTunes on your computer, open Applications and drag & drop the file there. Make sure to set your device to sync apps.

It’s very simple to get a copy of Flappy Bird onto your device, even after it has been taken down.

Follow the simple steps above and enjoy the game!

Pro tip for thorough readers: to score higher points, try to pass through the gates with just two “flaps”. Of course, if you need to get higher do more, but try to get back to just two. With this tactic I get more than 30 points consistently.

Also, here’s a video of how Chuck Norris would play Flappy Bird.