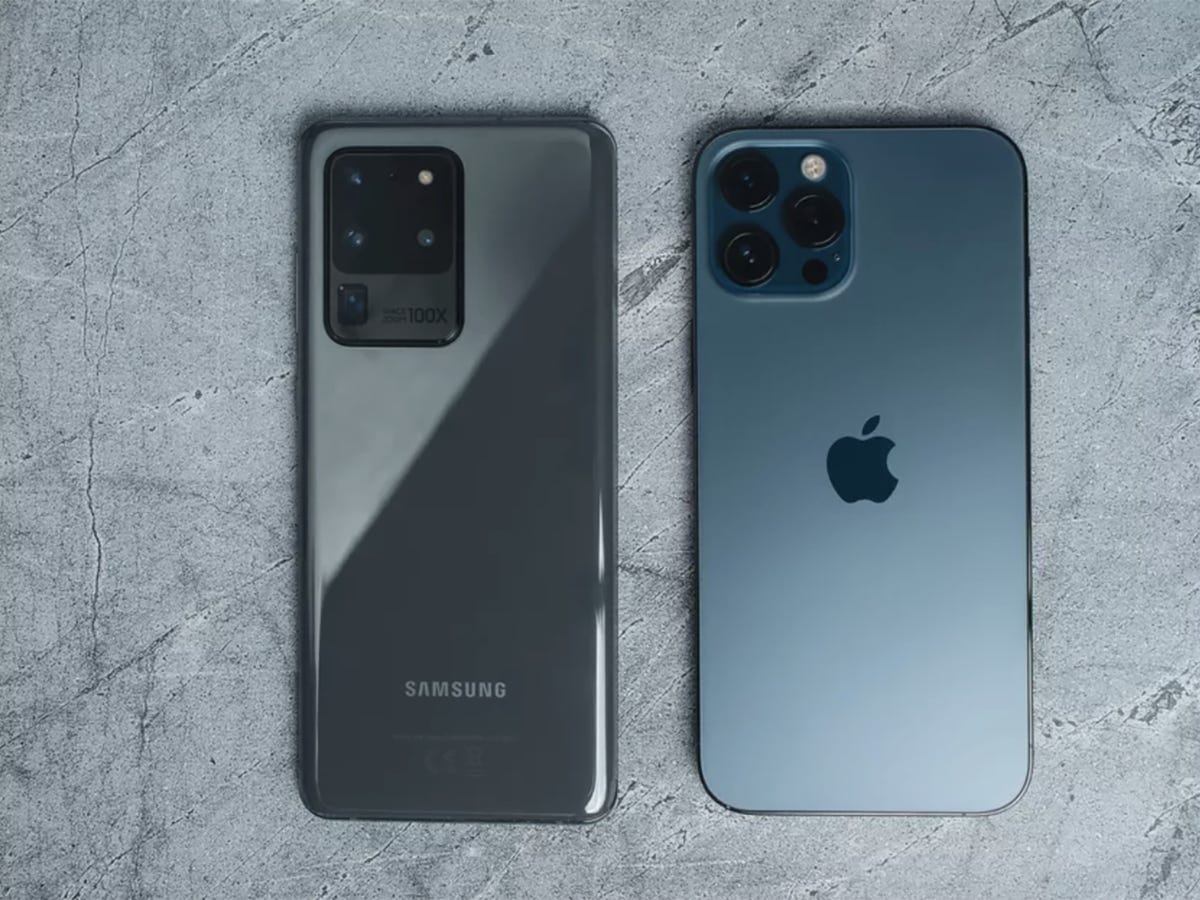 The latest iPhone vs. Samsung: Which one is right for you?

The rivalry between smartphone giants iPhone and Samsung is a well-known and long-standing one. The two companies have been at a constant clash for nearly ten years as they compete for the hearts, minds and souls of mobile phone users. Apple launched the smartphone revolution in 2007, and now holds a global market share of 27.43%. While Samsung entered the arena soon after, it is currently neck to neck with Apple, with a 28.36% market share.

Mobile phones have become a very integral part of daily life. In fact, we can say that one’s entire life unfolds with the touch of a single button. With the growing utility and importance of smartphones in everyday life, manufacturers have begun to further enhance technology to meet the demands of users. Upgrading smartphones to the best on the market is a vital investment in bettering the overall functioning of life.

The most recent developments in the mobile phone arena can be seen with the release of two models by the topmost brands. These are the Apple’s iPhone 13 Pro Max and the Samsung Galaxy S21. Both phones have captivated the public, thanks to their enhanced features, sleek designs, and overall appeal. The Galaxy, which was released earlier in 2021, dominated the market for the bulk of the year. However, despite Samsung’s head start, Apple has proven to be a formidable competitor.

The question of which model shall be crowned the phone of the year is subjective to your needs and preferences. The various features, advantages, and downsides described below will assist you in making the best choice.

Both smartphones have appealing and distinct designs with a wide range of colour choices. The iPhone 13 Pro Max features smooth, symmetrical surfaces and a surgical-grade stainless steel rim. This material is more premium than the aluminium used in the Galaxy S21. Still, the Samsung comes with a curvier design that is more comfortable to hold, and just as eye-catching.

In terms of colour choices, the iPhone 13 Pro Max is available in Gold, Silver, Graphite and Sierra Blue. The Samsung Galaxy provides a slightly more expansive selection of hues titled as the Phantom range. Here, you can choose from black, silver, titanium, navy blue and brown.

Let’s now talk about the displays. Samsung’s device comes with a 6.8-inch AMOLED display that can run at an impressive refresh rate of 120Hz. On the flip side, the 6.7-inch OLED screen of the iPhone 13 Pro Max is slightly smaller and less crisp. In terms of brightness, the Galaxy works at a peak brightness of 1500 nits. This makes it brighter than its Apple counterpart which achieves a maximum brightness of 1200 nits. Nevertheless, Apple’s device also boasts a 120Hz refresh rate, hence bringing it on a par with Samsung’s.

Generally, both of the displays are incredibly vibrant. Samsung, in this model, also integrates its ultrasonic fingerprint sensor within the display. Apple too, continues to reintroduce its Facial Recognition feature in its latest models just like with its earlier ones.

The iPhone 13 Pro Max outperforms the Samsung Galaxy S21 by a wide margin when it comes to performance and processing power. Apple’s iPhones have long been the most powerful in their class, and that is a fact. The A15 Bionic processor in the iPhone 13 Pro Max continues that trend. During tests, Apple’s device performed much quicker than its Samsung counterpart. In fact, it was nearly twice as fast as the Galaxy regarding frame rate, multi-core capabilities, and video transcoding speed.

Despite this, both phones have a very fluid feel when in use. The difference in either models regarding their basic operation and high-graphic gaming is not noticeable. This means you can enjoy playing games at a mobile casino UK on both phones without any hassle. Nonetheless, if you’re looking to shoot high-quality videos or perform high-power tasks, then the iPhone 13 Pro Max will suit you better.

In terms of internal storage, both phones offer 128 GB, 256 GB, and 512 GB options. However, the iPhone 13 Pro Max also offers a 1 TB option. When it comes to network capabilities, both manufacturers offer 5G in their devices.

In regard to battery capacity, the Samsung phone has a 5,000mAh battery, whereas the iPhone has a 4,352mAh battery. A single charge will provide up to 2.5 hours of additional battery life for the iPhone 13 Pro Max. The Samsung Galaxy S21 is a capable device on its own and will easily get you through an entire day of fair usage.

When it comes to recharging, neither the Galaxy nor the iPhone is the most advanced. This is because while the former supports up to 25W charging, the latter can only go up to 20W. Another thing is that none of them comes with a charger in the package. Though we all appreciate the environmental consideration, we think customers should get the choice of a charger.

These models’ cameras are top-of-the-line, though they take entirely different strategies to achieve the same. The new iPhone 13 Pro Max features a triple camera system with a primary sensor and an ultra-wide camera. A unique telephoto lens with a 3x zoom is also included, which can take photos in Night Mode.

In addition, you’ll also find some new functions in the iPhone. The first function allows you to choose from various photographic styles, altering the tone and warmth without distorting the pictures. The second one is the Smart HDR 4, which enables you to adapt the camera when including several individuals in a snap.

On the other hand, the Galaxy comes with a 108MP primary wide sensor that employs pixel binning to produce sharp, bright photos. It also contains an ultra-wide sensor and two telephoto sensors for precision zooming. With respect to video quality, this phone can record video in up to 8K at 24fps. This makes it slightly superior to the iPhone 13 Pro Max which can only record in 4K at 60fps.

Overall, the iPhone camera is a superior pick, especially if you want sharp camera quality with more balanced photos in varying lighting conditions. The Samsung Galaxy S21, on the other hand, is a wonderful alternative if you require precise zooming choices, especially for filmmaking.

The unique special feature of the iPhone 13 Pro Max is the LiDAR Scanner. This feature allows you to create 3D depictions of various objects and their surroundings. The LiDAR scanner technology will enable you to scan and map your environment by shooting laser beams and monitoring how quickly they return. What is great is that it can scan things from a distance of up to five metres. And since the laser operates at the photon level, it may be used both indoors or outdoors, at any time of day or night.

In the Samsung Galaxy, a fantastic feature is the Stylus Pen. The pen is flexible and strong, whether you’re taking notes, sketching, playing games, or using it for general convenience. While Apple has its own comparable Apple Pencil, the manufacturer is yet to include support for it in its smartphone line-up.

Regarding syncing, Apple devices are exceptionally easy to sync with one another, making the brand even more appealing. Syncing your iPhone, Mac, Apple Watch, AirPods, and Air tags is a breeze. This is made possible by iCloud, which works on all Apple devices and provides 5 GB of free storage. Similarly, Samsung Cloud can keep your phone’s data up to date by syncing data across all Samsung devices. This includes your phone, Samsung watch, VR headset, and pen.

That said, the Samsung pen, the incredibly remarkable LiDAR technology, and syncing capabilities sets these new devices apart from their predecessors.

The Samsung Galaxy S21 and the iPhone 13 Pro Max will remain in the fiercest competition as days go by. Apple’s telephoto camera, HD+ display, light-performance camera, and unrivalled shot consistency continue to impress. The addition of a 120Hz display to the iPhone has brought it to par with the magnificent screen of the Galaxy S21. On the other hand, Samsung manages to dazzle us with its superior display brightness and crispness.

In terms of performance, there’s no contest. The iPhone 13 Pro Max is able to perform high-end tasks nearly twice as rapidly as its Samsung counterpart.

With both smartphones in the race for the phone of the year, it is indeed challenging to pick a clear winner. Of course, devoted apple users will argue that the iPhone 13 Pro Max’s fresher vintage and strong performance gives it an advantage. Still, the Galaxy S21 retains several plausible features keeping it in close and continuous competition.

At the end of the day, both the iPhone 13 Pro Max and the Samsung Galaxy S21 are the epitome of cutting-edge technology. The only thing that truly distinguishes these phones is what your requirements and preferences call for. Overall, these brands will continue to make a great impression in the future, as they have done in the past.

How to Insert Signature in Google Docs: 2022 Updated