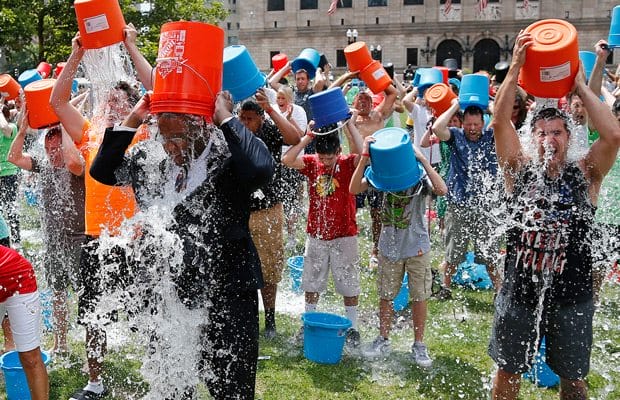 Here’s the meaning behind the ‘Ice Bucket Challenge’

Why are famous people like Mark Zuckerberg, Tim Cook and Conan O’Brien dumping ice water over their heads? Have they finally gone mad?

If you’ve been browsing the web or social media platforms the last days, you probably came across a number of pictures and videos of well-known personalities getting themselves wet with ice-cold water. And after doing that, they challenge other famous friends to do the same. Doesn’t that kinda sound familiar? Yes, not so long ago there was a similar thing going on with beer instead of water. Back then, people were challenged to chug a beer instead of pouring it over one’s head. Do you remember what the purpose was? Exactly, there was none (except pointless drinking, of course).

Why the ice-cold water?

So what’s the reason behind the so-called ‘Ice Bucket Challenge‘? Other than the 24 hour beer challenge, the goal here is to raise awareness for Lou Gehrig’s disease or ALS (amyotrophic lateral sclerosis). ALS gradually damages nerve cells that control muscles. In other words, it makes people lose control over their muscles, meaning they slowly lose the ability to walk, speak, eat and breath. People with ALS have an life expectancy of 2 to 5 years. The serious thing here is that there’s no treatment and the only approved drug buys just a little bit more time.

The purpose of the challenge is to raise money and awareness for ALS. Former Boston College baseball player Pete Frates is being credited for starting it. Frates has been diagnosed with ALS and is living with it since 2012.

The answer is A LOT of people. Among them were lots of famous people, too. The list below contains a few of them.

Since the web is full with videos and gifs of the challenge, I think we can say that it succeeded to raise awareness. Also, it raised a lot of money as well. The ALS Association got $4 million in donations between July 29th and August 12th. All that money will go into finding a cure for ALS and supporting the care of people currently living with the disease.

Check out all the different videos yourself! Below are a couple to get you started.