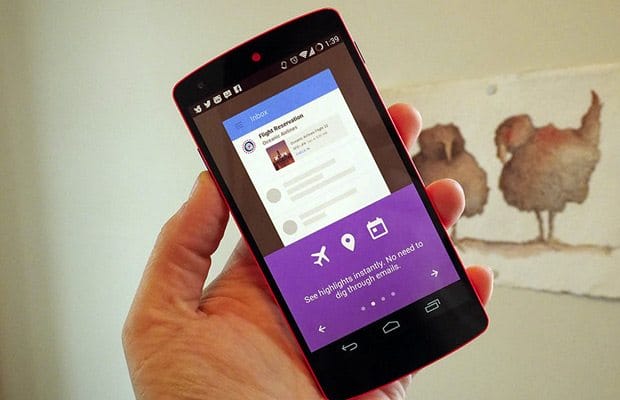 Gmail launched about a decade ago. Earlier today, Google announced Inbox which seeks to reinvent the email as we know it. The new Gmail app is currently invite-only and available on Android phones, iPhones and using the Chrome browser.

The idea is quite simple: Instead of displaying a list of emails, the program displays all relevant information so that you don’t have to open the email at all. Pretty cool. In addition to that, Inbox bundles emails into groups which you can dismiss or snooze – time or location based. In contrast to other third party email apps, Inbox natively supports Gmail and can be used in addition (or instead of) to the normal Gmail apps. It’s like Google Now met Gmail and created a nice, mediated, email experience.

The app nicely implements Google’s Material Design which will be introduced in the next Android OS called Lollipop. According to Alex Gawley, director of Gmail and Inbox, Google wanted a fresh start and rethink email.

Inbox is currently invite-only: Here’s how you get access

Although I personally was not able to test the app myself, I’m looking forward to get access through the waiting list. If you’re interested in an invite, send an email to inbox@google.com and ask to be added to the waiting list. You’ll receive a short automated answer stating:

Thanks for requesting an invite. We’ll send you one as soon as possible.

Your friends at Gmail

At the moment it is unclear when invites will be send out, but according to Alex Gawley Google is “Good on servers”. We’ll keep you posted and write a proper review once we get access.

How to delete HTC, Samsung or LG apps from your Android phone