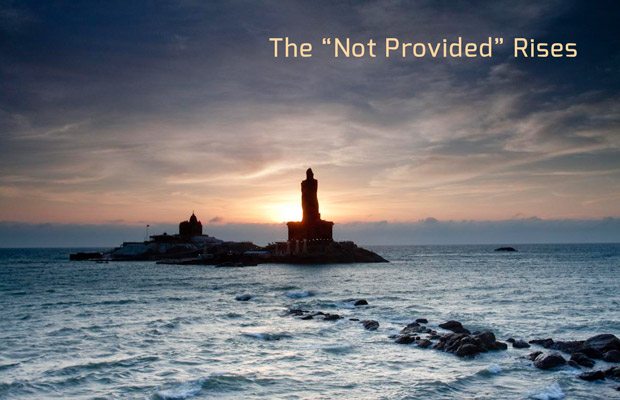 The Rise Of Google’s “Not Provided”

Batman’s got the Joker, Spider-Man’s got the Green Goblin and SEO practitioners have got Google’s “Not Provided”.

Ok, this might be a bit too dramatic, but you get the idea. In October of 2011, Google announced their decision to use SSL search for signed-in users. That’s when the evil started.

First, what is “Not Provided” and what does it mean? The term “Not Provided” can be found in Google Analytics (Google’s website analytics tool) in the keyword overview of organic site visits – visits through natural search results. With the use of encrypted search data (SSL) Google made it impossible for webmasters to track the search queries that visitors used to get to their website. Instead, Google only shows the term “Not Provided” in Analytics, which gives anyone who wants to analyze their organic site traffic a serious headache. 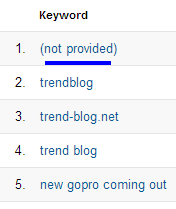 Matt Cutts, head of webspam at Google, said in an interview that the impact on the search data would be in the single digits. Well, in this case it would hurt just a little like a mosquito bite. The prediction was true, however, only for a little while. Today, “Not Provided” accounts for almost 40% of all organic search keywords. This fact was published in a study from Optify.

Before we get into some of the main findings of the study, let me say some words about SSL. If you are familiar with that term, you may skip the next part.

SSL stands for Secure Sockets Layer and is a protocol that secures or encrypts internet communications. You can find this protocol in web browsing or email, for example. SSL ensures that services that act as an intermediary can’t view your encrypted data.

When you are on a website that uses SSL you can easily see it in your URL field. Instead of the usual “http” you would see “https”, which means that you’re data is currently being communicated encrypted to the website’s server.

Key Findings of the “Not Provided” study

In the graph below you can clearly see the rise of the “Not Provided” Rate, which reached 39% in September 2012. 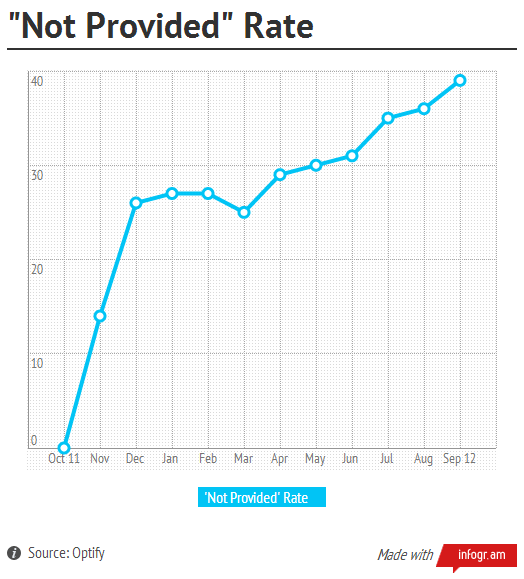 What does that mean for you?

How about you? How much does “Not Provided” traffic affect you and what ways are you using to get useful data out of this rising villain?

Charts made with infogr.am
Cover image courtesy of Mehul Antani.

7 thoughts on “The Rise Of Google’s “Not Provided””

Hi Marc
The thing is will get even worse. As Google continue to push users to towards its own social platform, more of them will be searching while signed in.

We are already looking for analytics software other than GA.

What percentage of your organic traffic is (not provided)?

Hi! I know, I think the rate will increase pretty significantly. Google attracts more and more people to creating an Account. Best example are Android phone owners, who need one to leverage the full potential of the OS.

Have you already found a good alternative to GA? If so, which ones?

We are still in research stage.. but cost is also a huge factor, will happy to share once finalised

Thanks, I’d appreciate it!

Switching analytics software is not going to help at all. Google Analytics isn’t hiding anything — the data is simply not there to show you. The search term is not in the referrer, so no tracking code you install on your site can pick it up, just like GA can’t anymore.

That is absolutely correct. However, there are ways to make the hidden data at least a little more helpful. Carrie Hill wrote a good article about that: http://searchengineland.com/turning-not-provided-into-useful-actionable-data-135800

Maybe there are paid analytics tools out there which can get more out of (not provided), but I doubt it to be honest.