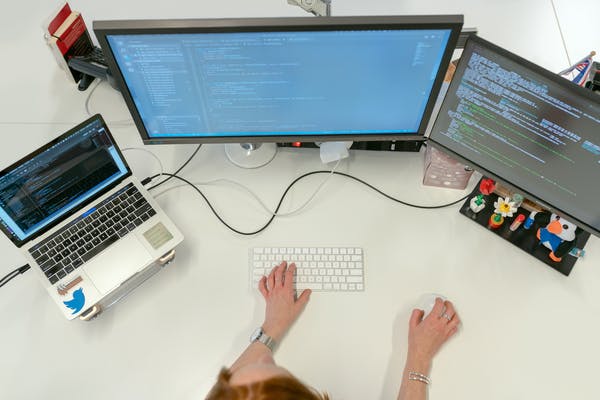 The Ultimate Guide to Coding Languages

If you’re thinking about studying coding, then this guide is for you! We’ll talk about some of the most popular coding languages and discuss the basics of each so you can start building your own apps, software, websites, and games.

Coding Our Way to the Future

In today’s technology-driven world, there is no doubt that coding is one of the most important skills a person can have. Although some people go the no-code route, more and more people are learning to code. With so many different coding languages available, it can be hard to know which one is right for your project.

First and foremost, it is essential to decide what type of coding you want to do. There are three main types of coding: web development, mobile development, and software development. Each has its benefits and drawbacks, so deciding which will best suit your goals is vital.

Web development is the most common type of coding out there. It involves creating websites from scratch using different programming languages. Some popular web development languages include PHP, Java, and Ruby on Rails.

On the other hand, mobile development focuses on creating apps for smartphones and tablets. Because these devices are constantly changing, mobile developers need to keep an ear to the ground for any new updates. The most common mobile app development languages are Java, Kotlin, Swift, and Objective-C.

Developers have more wiggle room for software development to experiment with different languages. That’s because the software requires various languages for specific purposes, but it depends on its functions. JavaScript, HTML, CSS, and Python are some of the go-to languages for software programming.

Now that you have a basic idea of what type of development is available, let’s dive into some of the more specific purposes of these coding languages.

Python is famously known as a programming language for data science, web development and scientific computing. However, it’s also used for artificial intelligence (AI) and machine learning (ML). So what makes Python so suitable for these tasks?

Python is compiled rather than interpreted, which means it can run much faster than languages like Java or JavaScript. It also has an efficient garbage collector that reclaims memory when no longer needed. That’s what makes Python an ideal language for data-intensive applications.

Additionally, Python has an impressive library of modules that helps power algorithms, which makes programming AI and ML much faster and easier than any other language.

C++ is a powerful language that programmers can use for various tasks, but one of its primary uses is building online games. Since C++ is a versatile language, developers can use it to create both challenging and fun games, like poker, roulette, and other casino games.

It is also a fast language, which makes it perfect for creating games that need to be fast-paced. It’s also helpful for developing studios whose clientele love to play free online games because they will load quickly and efficiently.

Additionally, C++ has many features that enhance the visual quality of its games. For example, it has a built-in graphics library that allows developers to create captivating graphics without learning additional programming languages.

As mentioned earlier, developers use JavaScript for programming websites. However, JavaScript isn’t the only language developers use to build a website. Languages like HTML and CSS handle the website’s format and design. Once that’s all complete, JavaScript comes in and ties it all together.

JavaScript is a programming language that essentially makes the code think and behave independently. It’s the spark of life that animates all that design and formatting developers work so hard on.

JavaScript is one of the easiest languages to learn. Each line of code can be written in pieces, so there’s not as much stress over perfection as in other languages.

Java is a versatile programming language designed for Android devices. However, in recent years, some developers have switched to Kotlin, which is meant to be a lighter, more efficient language than Java.

On the one hand, developers love Java for its robustness, versatility, and intuitive approach. Since Java has been around longer, it’s easier to figure things out for yourself because there’s so much material and resources available online. However, Java’s syntax is a bit more complex than other languages, which makes it harder to iron out bugs.

On the other hand, Kotlin has become one of the official Android languages. It’s appealing to developers because of its lightweight deployment, making apps less likely to crash. However, because it’s so new, very few people or resources can assist other developers who want to learn the language.

While Android developers deliberate between Java and Kotlin, both programs have created unique applications, including Spotify, Twitter, Pinterest, and Trello.

Swift is a programming language created by Apple that is most commonly used to develop iOS apps.

Swift is based on Objective-C, making it a popular choice for developers who are already skilled in that language. Additionally, Swift offers some great features that make app development more efficient and productive.

It has features that make it easier to work with, such as using statements multiple times without writing multiple lines of code. Additionally, Swift has native graphics and animation support, making it an excellent choice for user interface development. Swift is a powerful and fast programming language well suited for developing complex iOS apps.

How to Turn Off Samsung S21 from the Notification Shade

Top Benefits of the Internet in the Field of Education