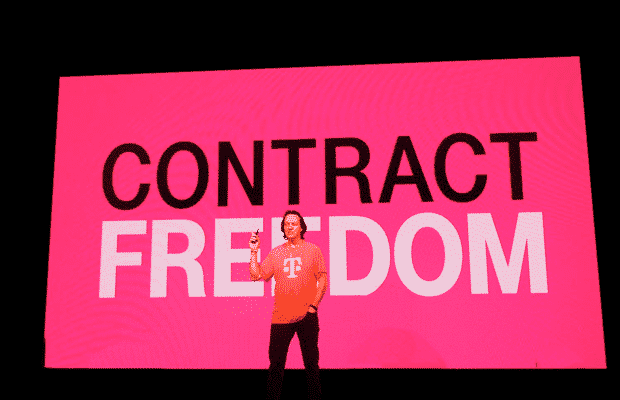 If consumers haven’t noticed lately, the cell phone industry is changing, and T-Mobile is glad to be one of the causes. Last year, the mobile communications giant began overhauling its services and really listening to what customers were saying. Since that time, the “Un-Carrier” has agreed to pay early termination fees for those switching to T-Mobile, eliminate roaming and international data usage fees, and create a plan that does away with annual service contracts.

Now, there’s more. T-Mobile recently announced that it will eliminate overage fees and is urging other cell phone providers to do the same. Additionally, the company wants to sell its tablets at more competitive prices and is offering a phone plan affordable to everyone. Maintaining a high level of customer satisfaction and taking eye-opening risks is paying off too. In 2013, T-Mobile acquired more than 4.4 million new subscribers, a significant number of whom switched from Sprint & AT&T.

Beginning May 1, 2014, T-Mobile will do away with overage fees on data limits, a move that also carries over to those who are still on voice and text plans with fixed limits. John Legere, T-Mobile’s U.S. chief executive, wants Sprint, Verizon Wireless and AT&T to do the same.

In an online petition, Legere states overage penalties from his three competitors add up to about $1 billion a year. “It’s time to show these companies that we’re not going to take these outrageous fees lying down anymore,” he said. About 100,000 consumers signed the petition within the first week.

Another big push by T-Mobile recently is its offer to sell LTE versions of their tablets at the same cost as its Wi-Fi models. T-Mobile will provide 1GB of free 4G LTE data for the rest of the year as well as 200MB of free data for the life of the device.

Like it has already promised, the Un-Carrier will pay early termination frees with this program as well to customers who trade in their tablets and purchase a new one at the lower “same-as-Wi-Fi” prices.

As if eliminating overage fees wasn’t enough, T-Mobile now also has an affordable $40 Simple Starter Plan that offers unlimited talk and text and up to 500 MB of 4G LTE data. However, since the LTE data isn’t unlimited, the “no overages” program isn’t exactly true. Once users hit the 500MB for the month on their LTE-enabled LG Optimus F3 or other phone or device, they can purchase additional data if they choose instead of automatically being charged a fee to continue the usage as other cell phone providers charge.

What the $40 Simple Starter Plan doesn’t offer is access to unlimited international data and texting that come with other T-Mobile plans. The company states that this plan is best for those who plan to use their devices domestically and is not the best choice for those who need international benefits.

With T-Mobile providing all of these offering to its customers, other companies are going to have to follow suit if they want to stay in the game.

Jennifer is a freelance technology writer who enjoys covering everything from fun apps to useful gadgets to the latest tech news. You can keep up with her latest tech tips and tricks on Twitter.